Security guards in the Philippines have been banned from wearing Father Christmas outfits.

It is common for guards at malls and hotels to dress up around the festive period but police say it poses a security risk.

Officials fear the outfits cause confusion for customers and make it easy for gangs to imitate security guards to get away with crime.

Bah humbug! Security guards in the Philippines have been banned from wearing Father Christmas outfits

A mall in Quezon City was fined £6,000 on Sunday after police caught security officers dressed up as Vatican Swiss guards, reported UNTV.

Their guns were confiscated under a rule which says guards cannot carry weapons unless they are in ‘the prescribed uniform’.

After the incident, Superintendent Jaime Santos of the Philippine National Police told security agencies that guards are not allowed to wear costumes.

He said dressing up poses a ‘high security risk’ because guards ‘may be imitated by some groups, or by those who are planning to do some crime.’

Mr Stantos said guards’ job is to keep people safe not to entertain them.

He added: ‘When there is an emergency, people will not approach them, thinking they might be just ordinary employees.’ 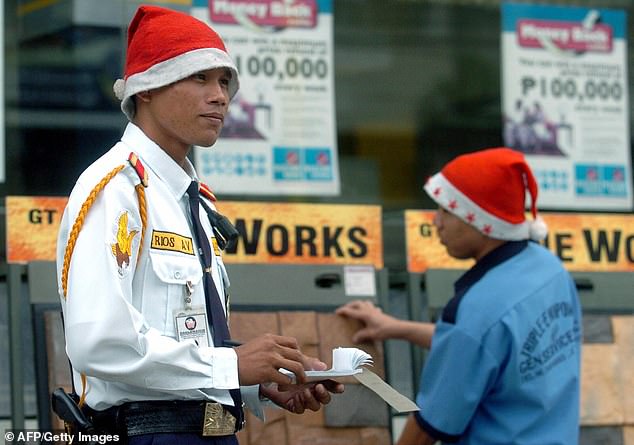 A Private security guard wearing a Santa Claus hat stand guard on the parking lot of a shopping mall, in the financial district of Makati in Manila