‘I love it!’: Bailey Smith TAUNTS Pies fans after copping abuse during clash at Marvel Stadium – and Dogs gun has the last laugh with 41 disposals in comfortable win over Collingwood

A chirpy Bailey Smith had plenty to crow about on Friday night as the Western Bulldogs star helped guide his side to a comfortable victory over Collingwood.

Smith, 21, having taken a mark on the boundary, received plenty of abuse from nearby Pies fans, but he was clearly unfazed by the abuse and responded by taunting his rival supporters – sticking out his tongue in jest.

The youngster had every reason to gloat, picking up 41 disposals on the night as the Bulldogs breathed fresh life into their season with a 48-point victory at Marvel Stadium. 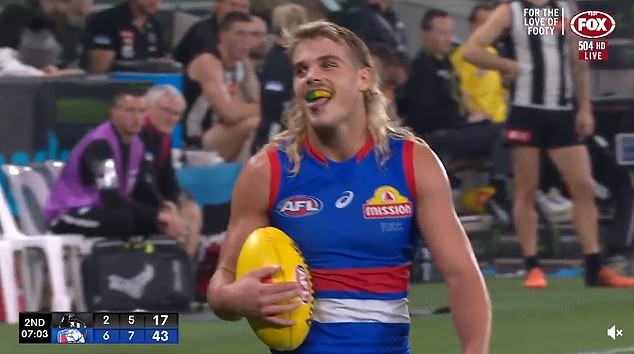 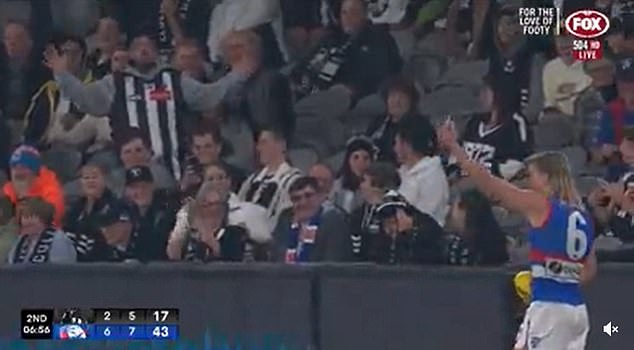 ‘I always do that, I don’t know why, I just love it,’ he said of his interaction with the crowd on Fox Footy.

‘I love the chat from the crowd, especially the bad ones – that was a bad one! It just drives me to have a crack a bit more, I love to have that competitive edge.

‘I hope they don’t take it personally but I love it. I always engage with them.’

Adam Treloar was the star of the show for Luke Beveridge’s side, being named the Robert-Rose medal winner after kicking three goals against his former side.

Treloar now has a 2-0 record for the Bulldogs playing Collingwood after he was controversially traded out of the Magpies at the end of 2020.

The 29-year-old spearheaded a midfield that dominated the Pies as Smith (41 disposals), Jack Macrae (37) and Tom Liberatore (30) helped the Bulldogs win the clearances 43-27. 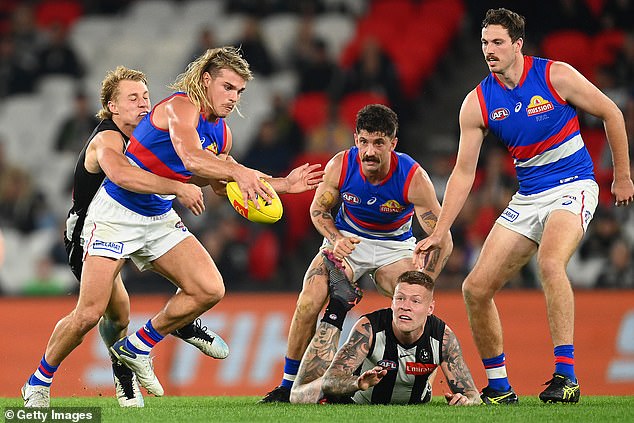 ‘The Adam Treloar-Bailey Smith situation is really challenging teams so to see Adam hit the scoreboard like he did, he’s such a weapon in space,’ Bulldogs coach Luke Beveridge said.

‘I think it was such an even spread through there, Liberatore and Macrae were as influential there as they can be and you’d like to get that every week.’

‘It was a poor start from us and an exceptional start from them, they just dominated us around clearances and contested possessions,’ Magpies coach Craig McRae said. 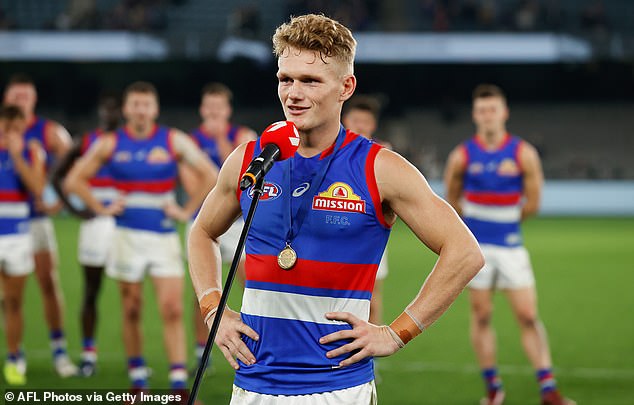 ‘Our fundamentals on a whole were really down so we’ve been doing a lot of work on them and we’ve got more to do.’

Magpies defender Jack Madgen looks set for a long stint on the sidelines after hurting his shoulder in the second quarter and was subbed out for Finlay Macrae.

The Bulldogs will have an opportunity to even the ledger at 5-5 next weekend when they host Gold Coast in Ballarat, while Collingwood (4-5) travel to Perth’s Optus Stadium to face Fremantle.