Craving an afternoon snack? Baker shares his simple recipe for the ultimate crispy potato gems – and they taste as good as they look

A successful pastry chef has shared his ultimate potato gem recipe on TikTok.

Morgan Hipworth, 20, who is known for his delicious savoury and sweet recipe collection, showed off his home made ‘tater tots’ in an easy-to-follow video with his many loyal fans.

The recipe for the crunchy potato balls has proved so popular it has clocked more than 190k views. 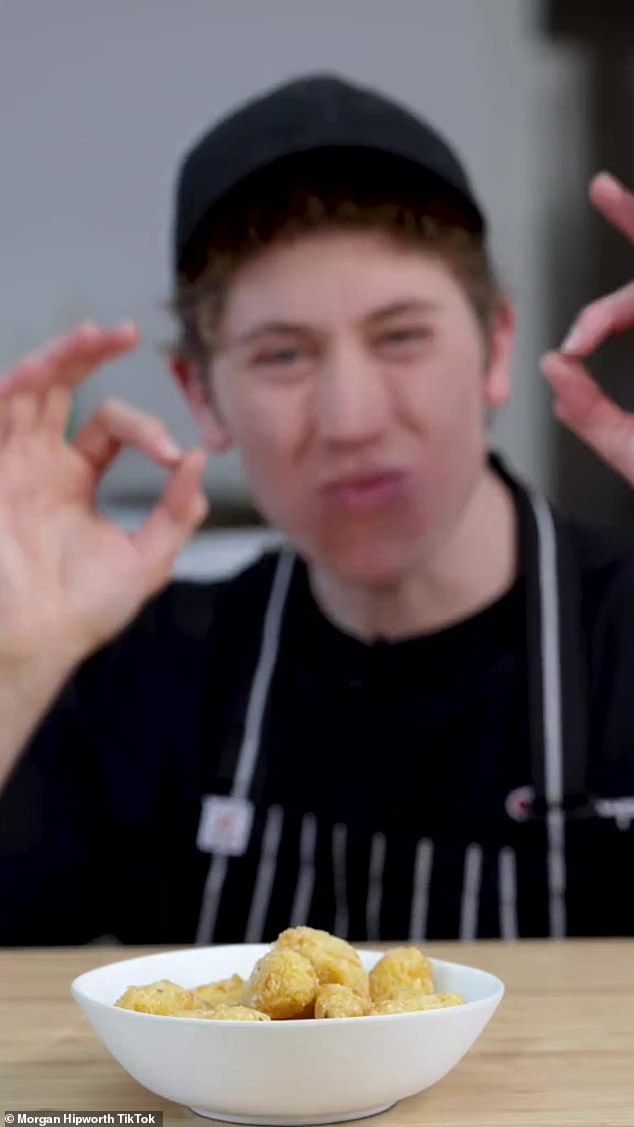 Morgan Hipworth, 20, who is known for his delicious savoury and sweet recipe collection, showed off his home made ‘tater tots’ in an easy-to-follow video with his many loyal fans 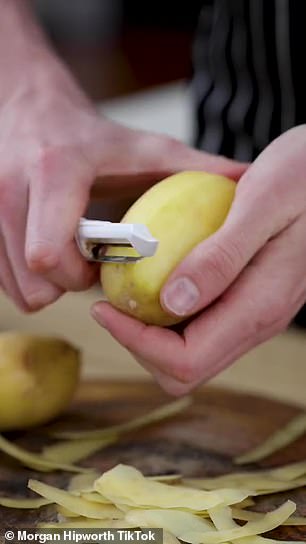 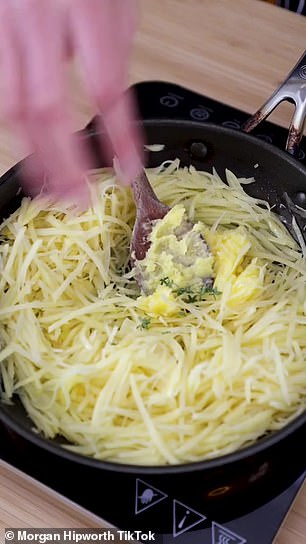 And the recipe for the crunchy potato balls proved so popular it went viral in a matter of hours, clocking more than 190k views

The recipe is easy to follow and calls for potatoes, ghee, corn flour, thyme and salt and pepper to taste.

The young baker starts his video by washing, peeling and grating his potatoes.

He then transfers the grated pieces to a bowl where he soaks them in ice-cold water for ten minutes.

He then squeezes out the excess water and places the potato on paper towel to dry.

Once they are dry he takes the potatoes, ghee and time and cooks them together on a low heat.

Once the potato is soft, which should take five or ten minutes, he adds salt and pepper to taste, and mixes in some  before squashing the potato into his preferred size and shape.

Once he has placed the potato gems on an oven tray he places them in a freezer for half an hour to ‘set’.

He then preheats his deep fryer, to 190c, but says you can put two centimetres of oil in a pan over high heat if you don’t have a deep fryer.

He then dusted each of his tater tots with some extra cornflour before frying them until they are golden brown.

How can I make potato gems at home?

Salt and pepper, to taste

Wash, peel and grate the potatoes. Transfer to a bowl and soak in ice cold water for 10 minutes.

Squeeze out excess water and place onto a tray lined with paper towel to dry.

In a pan over low heat add the ghee, thyme and potatoes, cook on low heat for 5-10 minutes or until the potatoes are soft. Season to taste with salt and pepper.

Move to a bowl and add the cornflour.

Using your hands mould into mini tater tot shaped pieces, and place onto a grease proof lined baking tray. Place in the freezer for 30 minutes to ‘set’.

Preheat a deep fryer to 190℃ or a place a pan over high heat with 2cm of oil.

Dust each tater tot in the additional corn flour and fry on both sides until golden brown.

Drain and season with sea salt. 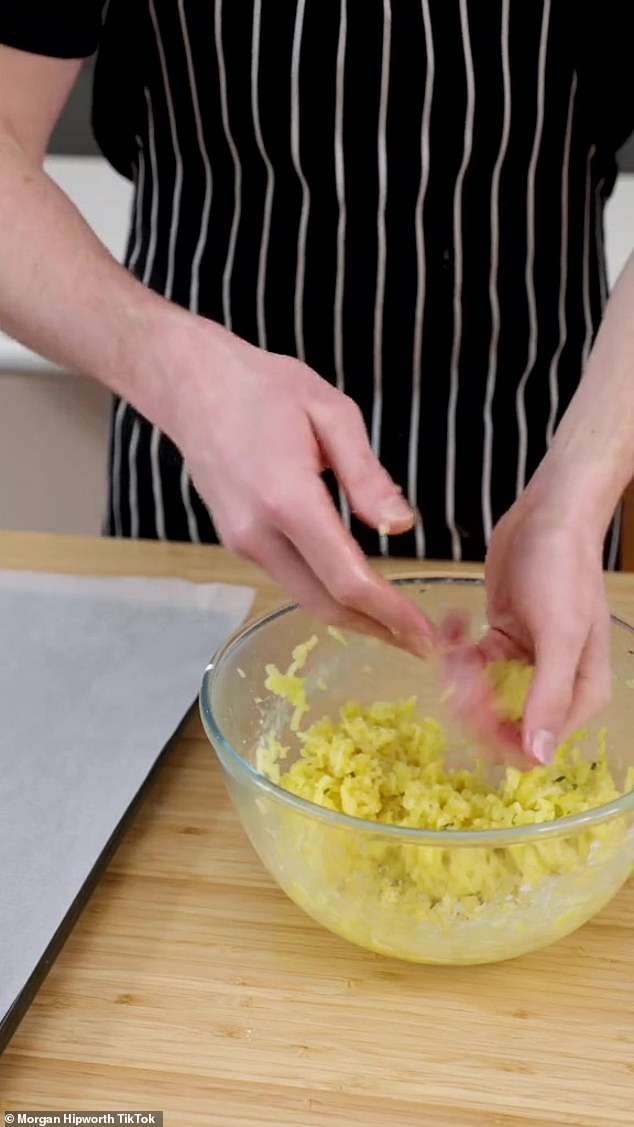 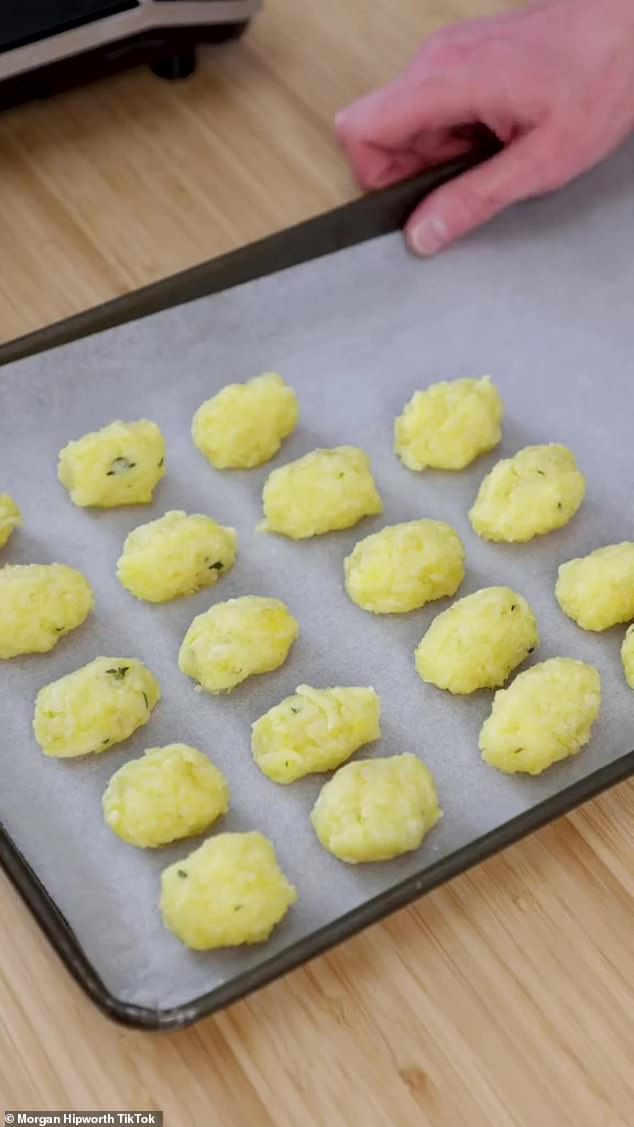 ‘You can’t beat homemade tater tots,’ he said as he posted the video.

And his fans were excited by the delicious recipe.

‘I just went to bed but now I am hungry,’ one woman complained.

‘Yum, it is basically a mini hash brown,’ said another. 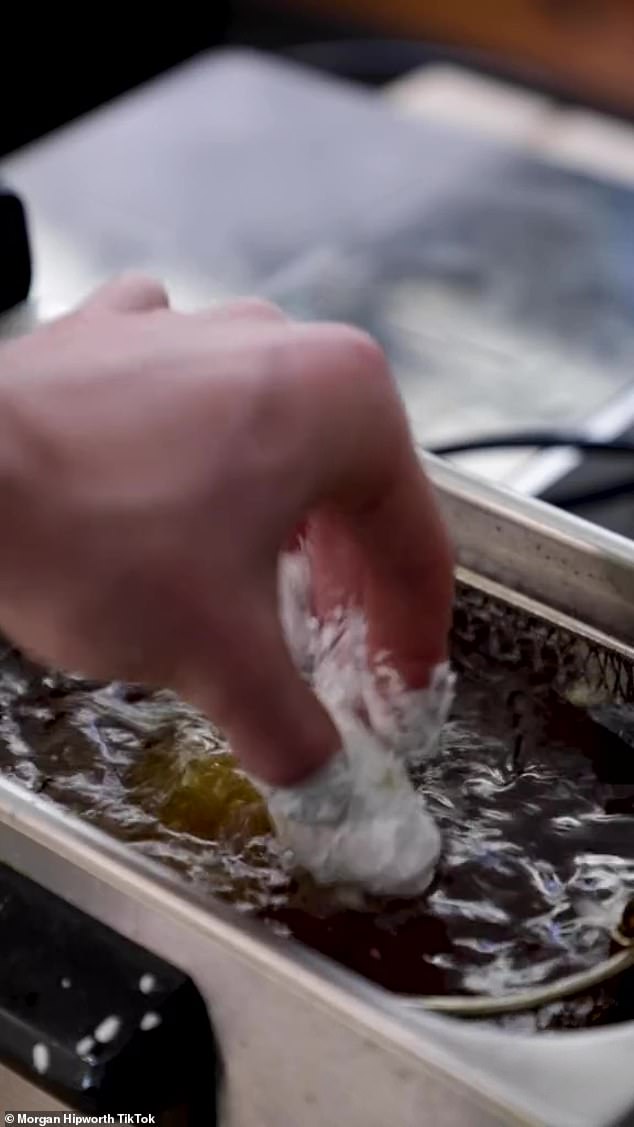 He then deep fried the potato until it was golden brown

While one man said having Morgan on TikTok was ‘making him fat’.

Especially when they heard how crunchy Morgan’s creation was.

‘That crunch though,’ one fan wrote.

Others revealed they were going to try the recipe immediately.

‘These will be perfect for dinner tonight,’ one woman said.