One of these beauty products is not like the others: Can you spot the cake hiding among the moisturisers?

A creative baker has wowed thousands after hiding her ultra-realistic looking cake on the shelf at a chemist.

Tigga Maccormack, from Melbourne, shared a video challenging fans to guess which item on the shelf at Chemist Warehouse was made of cake.

She shocked viewers and the store’s cashier in a follow-up clip when she revealed one of the bottles of Palmer’s Coco Butter moisturiser was actually an edible dessert.

Can you spot the cake? Talented Baker Tigga Maccormack has gone viral for her TikTok videos where she hides her ultra realistic looking cakes in stores and supermarkets

‘I’m here at Chemist warehouse in Chadstone, I’ve hidden a cake and I want to see if you guys can find it,’ Tigga said as she browsed the aisles encouraging followers to find her disguised cake.

Tigga has become known online for her ‘Spot the Cake’ series and said this was the ‘hardest yet’ even getting lost herself in the store trying to find her creation.

Viewers were quick to comments their guesses before the reveal. 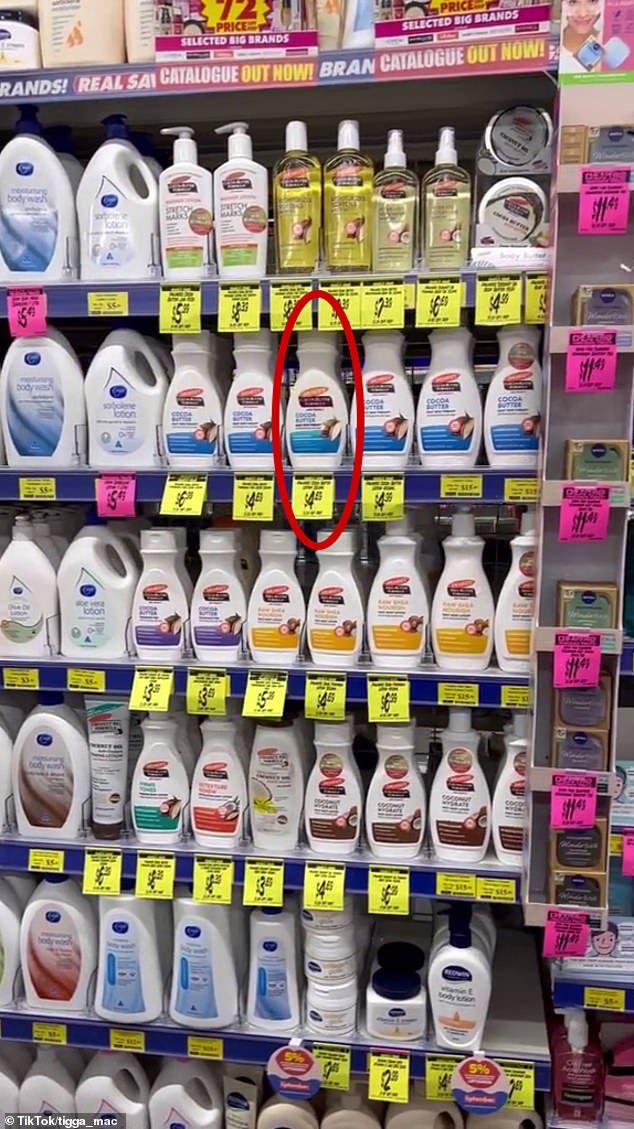 In her latest ‘Spot the Cake’ video, Tigga had thousands guessing which item at Chemist Warehouse wasn’t real before revealing the one of the Palmer’s moisturisers was edible 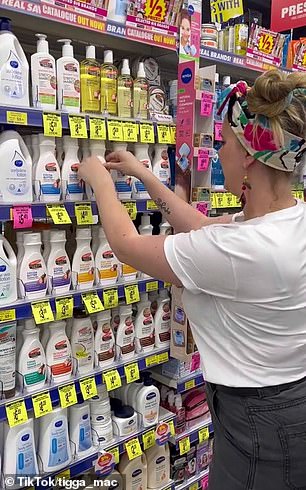 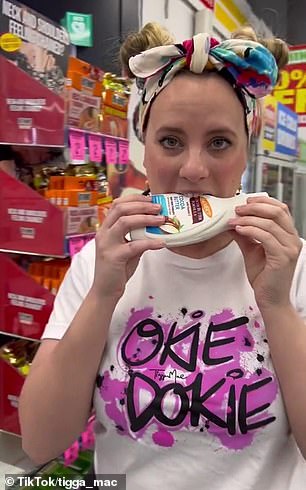 ‘Blue Nivea bottle without the sticker up top?’ one person asked while another speculated: ‘Green bottle, top shelf, far left one?’.

But it was the Palmers moisturiser on the third shelf down that turned out to be the cake which many said they guessed because the label was a slightly lighter blue than the others.

‘I was so glad to see I fooled so many people but it was in fact the Palmers Coco Butter, now it’s time to trick the cashier,’ Tigga said as she took the cake off the shelf to bring to the register.

Just as the checkout worker was about the scan the ‘moisturiser’ Tigga grabbed it back off her and took a big bite much to the employee’s shock and amusement. 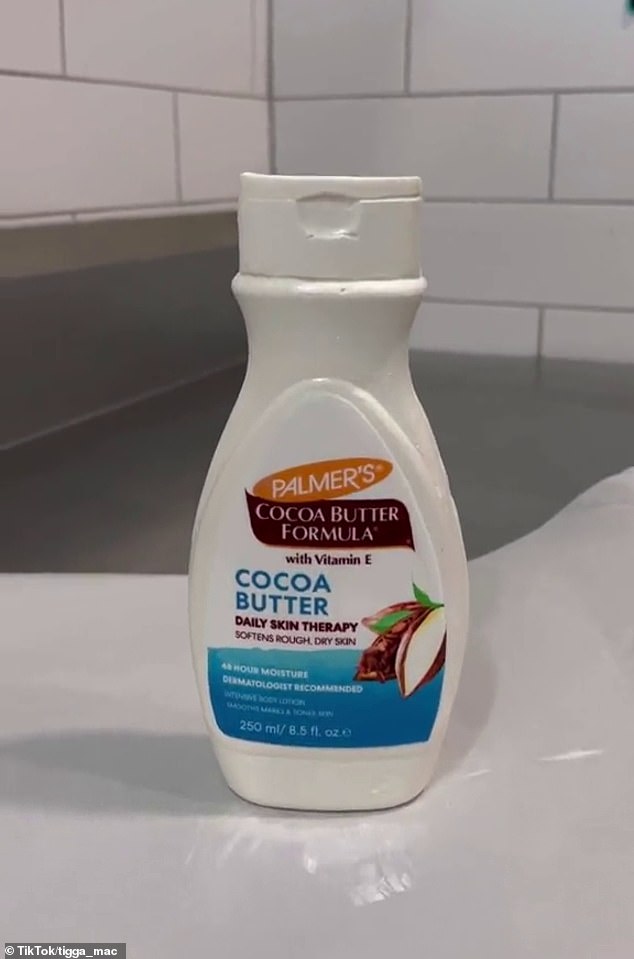 Tigga revealed how she made the amazing cake, this time using a mould to resemble exact right size and shape to the moisturiser bottles 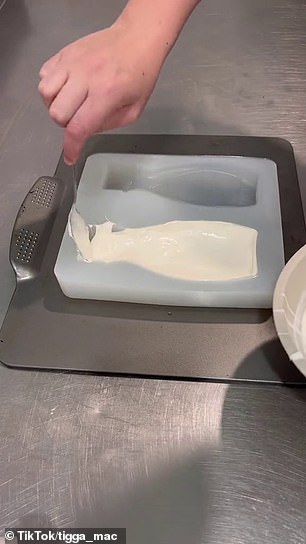 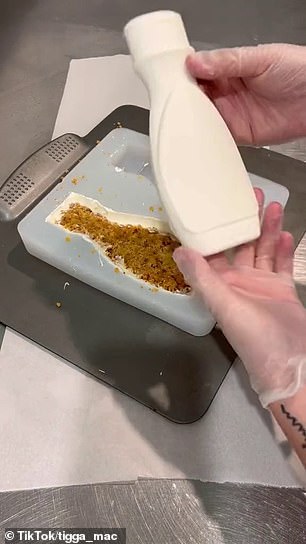 She poured white chocolate into the moulds to make the outer layer and, once set, filled it with sponge cake and icing

‘I WAS COMPLETELY FOOLED!’ one fan exclaimed ion the comments.

‘I thought it was that one! The white part in the cocoa bit was waaaay whiter then the other ones,’ another wrote.

‘I’ve given up guessing which is the cake. I always get it wrong,’ laughed a third.

Tigga revealed how she made the amazing cake, this time using a mould to resemble exact right size and shape to the moisturiser bottles.

She made the moulds by placing two bottles of Palmer’s coco butter into a silicone substance and left it to set. 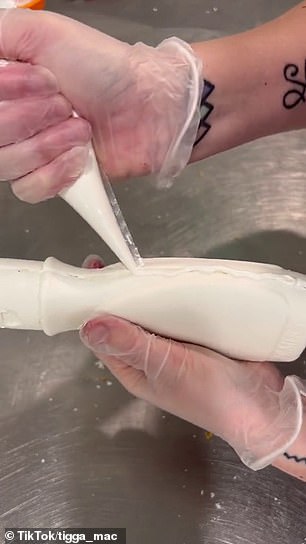 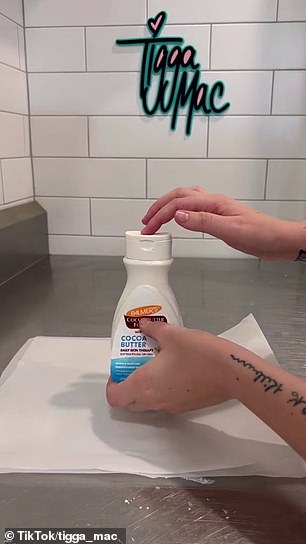 She poured white chocolate into the moulds to make the outer layer and, once set, filled it with sponge cake and icing.

‘This is the first time that we’ve ever done this so the moment those cakes came out of the moulds omg the relief,’ she said.

She then fused the two halves together with more melted white chocolate and stuck on two edible label.

‘Normally I would hand-carve my cake to shape, cover it in ganache and fondant but I’m so glad we went in this direction because the cake turned out perfect,’ she said adding she used real coco butter in the recipe.