Baku: The capital of Azerbaijan is coming into focus fast

Are you ready for Baku? It’s coming to get you. Some people might be hard put to find it on the map (try the Caspian Sea), much less think of going there. But the ancient capital of Azerbaijan on the Silk Road is modernizing fast.

Glittering at night: Modern Baku looks hugely impressive on the edge of the Caspian Sea

History there is aplenty: the Old Town of Baku is a medley of alleys contained within a medieval wall. When oil first became big around 1900, Baku boomed, throwing out boulevards and erecting theatres as though it were Paris.

Now it’s boomed again — and how. Oil still drives the Azerbaijani economy, so some of the heat has come off in recent years. But there’s still plenty of money sloshing around.

Waving over the city from a steeply climbing hill is the Flame Towers, three sleek high-rise blocks that undulate like the old-fashioned symbol for British Gas.

This is the Land of Fire. Supposedly, it’s where the Titan Prometheus was chained after having disgraced his status as an immortal by giving fire to humanity. At Yanar Dag, north of Baku, a hillside is permanently on fire due to the seepage of natural gas.

The spontaneous appearance of flames attracted fire-worshipping Zoroastrians for centuries, and they built a temple at Ateshgah. Perhaps, to some purists, the Flame Towers are a tiny bit in-your-face, ever so slightly bling.

For my money, they’re so OTT that they somehow come out the other side. They’re splendid.

So is the Carpet Museum (is it meant to look like a Swiss roll?) Carpets are highly prized in this largely Muslim land where, in the remote mountains, some families still live a nomadic existence.

I’m not sure, architecturally or otherwise, about the swooping Heydar Aliyev Cultural Centre but then one gets rather a lot of Heydar Aliyev here. He was Azerbaijan’s President from 1993-to 2003. Guess who’s the present one? His son.

Photograph the Flame Towers at dawn, when their curving flanks are modeled by the rosy light. At night, like the rest of Baku, the population of Flame Towers is transformed into a spectacular light show. Everything flickers, and dances.

The otherwise boring football stadium looks fabulous. Nowhere does nighttime quite like Baku. 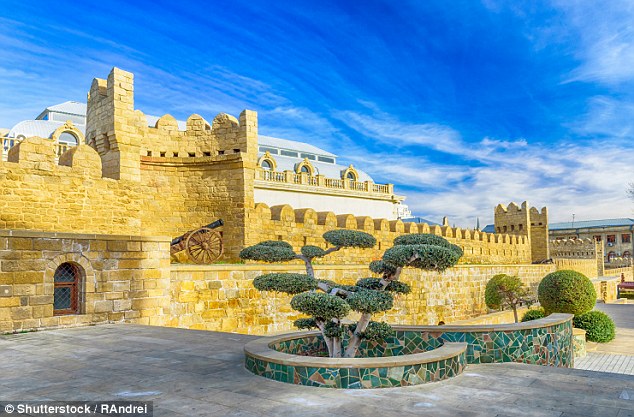 Keeping one foot in another life: Baku’s old town provides a contrast to all the newness

Even the petrol stations are glamorous. But that’s Baku, where of course shops include Bulgari, Tom Ford, Swarovski crystal, and Lamborghini.

Much of this development has happened in the past five years. Remember the Eurovision Song Contest? Possibly not, but Azerbaijan, the host country in 2012, does.

It pointed Baku towards the future, kicking off a splurge of development that is bewildering to the natives, who remember the featureless landscape before the buildings came.

For the traveler, it has brought a crop of international luxury hotel brands. I can’t, however, claim to have experienced them myself.

Coming here to research a novel, I asked the excellent Imaginative Traveller to find a modest guest-house — little realizing how literally they would take me at my word.

The modesty comprised a room with the quirk of an internal window opening into the room next door. The window was high up in the wall, but, when opened, it allowed the least sound from one room to penetrate into the other.

Oh, it was good for my soul – and clean. Everything in Baku is. In the morning, elderly women are out with their brooms made from twigs, sweeping up every last autumn leaf -of which, since the Old Town is ringed with parks, there is quite a number.

The Old Town itself is spotless: almost too much so for lovers of charm and character. The architecture has been over-restored. 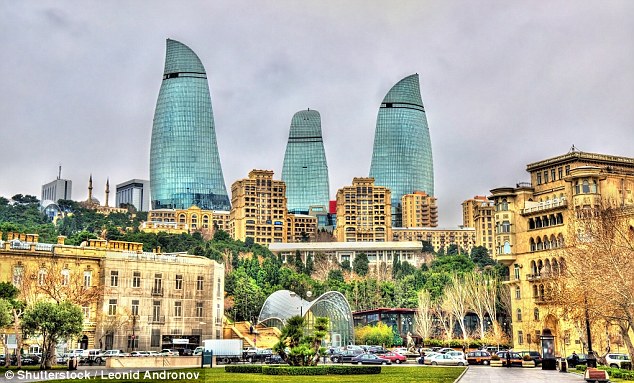 What hasn’t changed is the robustly flavored, lovingly served food. I steered clear of international cuisine and missed nothing.

Dishes are of the kind that should be eaten on chairs spread with sheepskin – much mutton, accompanied by what would elsewhere be considered Mediterranean vegetables, stewed until about to decompose into flavourful ratatouille.

Soups are good, baklava irresistible. Honey, served for breakfast, is the best you’ll ever find. Bread is apparently held to be sacred.

Baku may be on the verge of being blinged out, but it’s got some of its priorities right.

Azerbaijan Airlines flies from Heathrow to Baku for a £481 return.