Balenciaga gets inspiration from Joey Tribiani from Friends for $9,000 coat

Could Balenciaga’s new $9,000 coat be any more ridiculous? Social media users don’t seem to think so.

As part of its Fall 2018 collection, the designer is selling an ‘oversized layered parka coat’ composed of seven different layers — and made to look like the wearer is dressed in layers upon layers of shirts and coats at the same time.

While the design has struck some as outrageous, many are pointing out that it’s not even original: Joey Tribiani on Friends did it first.

Well that looks familiar! Balenciaga is selling this layered coat for $9,000 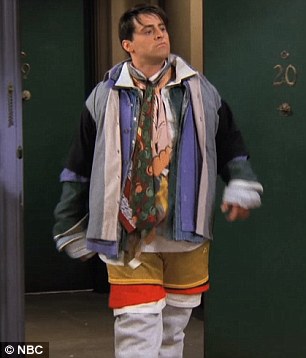 Iconic: Shoppers have noticed that it looks a lot like an outfit Joey Tribiani wore on Friends during a Season 3 episode

The coat made it’s runway debut in Paris in March, but it didn’t cause quite as much of a hubbub — likely because anyone who spotted it assumed the model was actually wearing several layers at once. 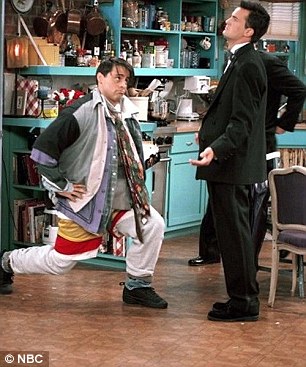 Better not do any lunges! In the episode, Joey and Chandler are arguing, so Joey puts on ‘everything Chandler owns’

But as the coat has popped up for sale online, shoppers have realized differently.

Matches Fashion is currently offering the coat for pre-order for a staggering $9,000, and explains quite clearly that all of the layers are in fact part of one coat.

‘Debuted on Balenciaga’s ski-themed AW18 runway, this navy parka coat is formed of seven separate layers, with the intention to be worn in cold-weather climes,’ reades the description.

But Gvasalia’s idea was hardly original. As Twitter users have pointed out, the coat bares an uncanny resemblance to one Joey wore during Season 3 of Friends. 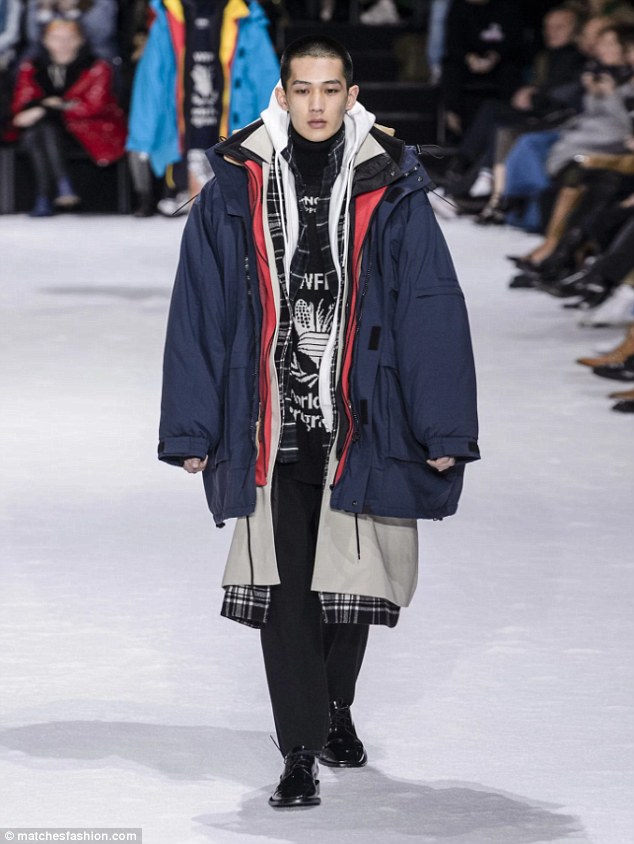 Flashback: Balenicaga sent the oversized coat down the runway in March as part of its Fall 2018 collection 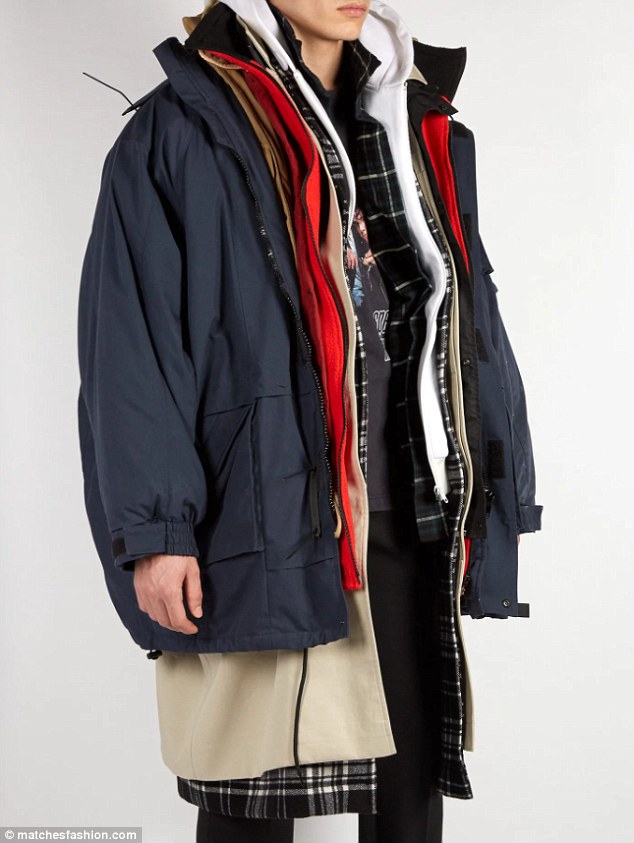 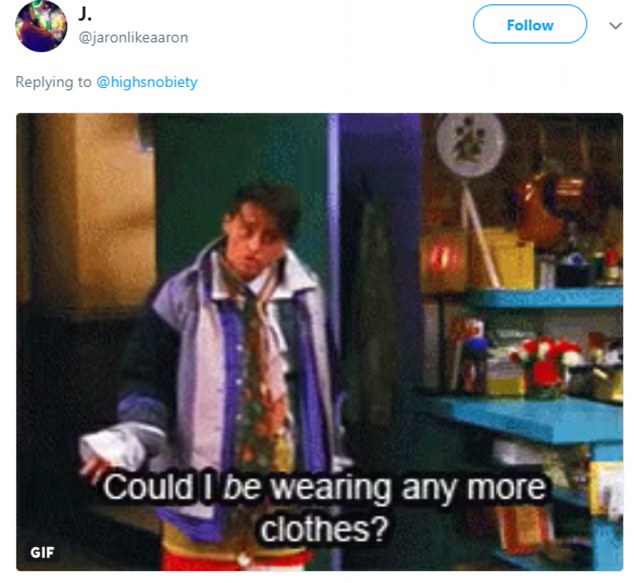 Look at me — I’m Chandler! Social media users have been mocking the coat and posting memes and GIFS

‘Imagine spending £8000 on this Balenciaga coat just to look like Joey from Friends in the episode where he puts all Chandlers clothes on,’ wrote one fan.

‘Joey Tribiani was frickin ahead of his time,’ wrote another.

In the episode, The One Where No One’s Ready, Ross is trying to hurry everyone up to get dressed to attend an event with him.

But naturally, there’s drama — and Joey and Chandler spend the night squabbling over stealing each other’s things. When Chandler briefly gets up from a chair in Monica’s living room, Joey sits, and Chandler insists he needs to stand up and given him back the chair.

So Joey, inspired, decides to get his revenge. He leaves Monica’s apartment, goes across the hall, and comes back dressed in layers and layers of Chandler’s shirts and pants.

‘Okay, buddy-boy. Here it is: You hide my clothes, I’m wearing everything you own,’ he tells Chandler. ‘Look at me — I’m Chandler! Could I *be* wearing any more clothes? Maybe if I wasn’t going commando!’ 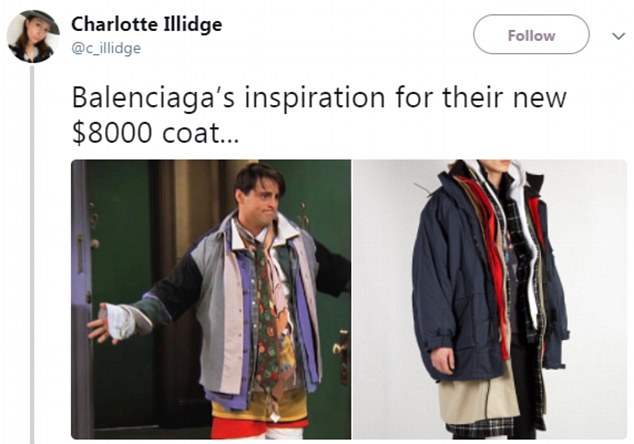 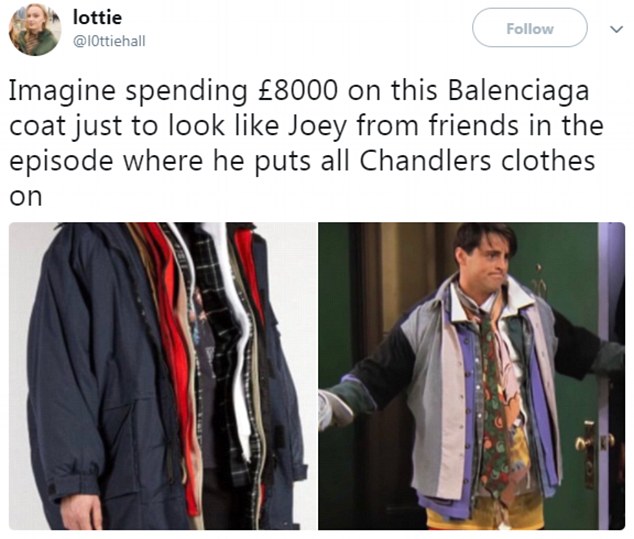 So expensive! Many also mocked the outrageous price 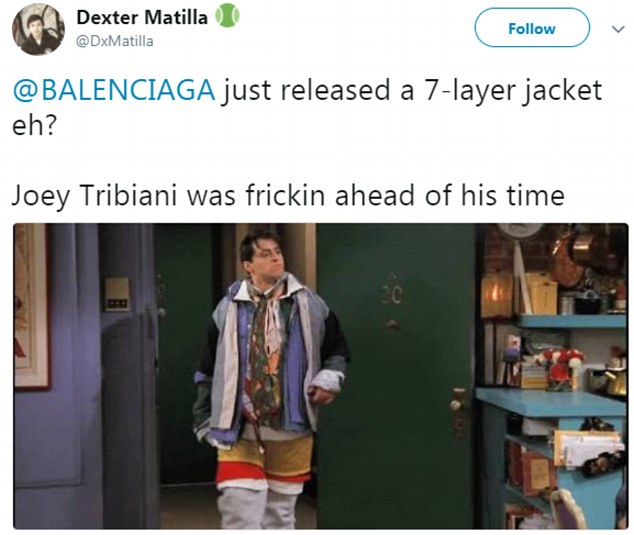 Just no: Some suggested there were much cheaper ways to get the look

Already thoroughly grossing Chandler out, he adds: ‘Phew! I tell you, it’s hot with all this stuff on. I better not do any — you know — lunges!’

The iconic moment has shown up in quite a few memes and GIFs, as fans compared Balenciaga’s new jacket to Joey’s look.

Meanwhile, Friends costume designer Debra McGuire — who worked on that particular look in that episode — told TMZ she noticed the similarities too.

‘The coat is wondrously similar. I am flattered,’ she said. Bravo then to the Friends- inspired coat!”

She also reflected on putting it together back in the ’90s.

‘I remember laying out all the pieces in the [Warner Bros.] workroom and contemplating the best way to construct while making it an easy garment to get in and out of. It would open from the back and Joey would enter that way,’ she said.