Where’s the beef? Footy fan is outraged to discover his party pie has no meat inside it

A footy fan has expressed his disappointment at discovering his party pie did not have any meat inside it.

The Adelaide Crows fan, who wished to remain anonymous, said he grabbed the party pie while watching his team play the West Coast Eagles at the Adelaide Oval on Saturday afternoon.

He reached for the popular Australian snack and took a bite to find the filling was completely missing.

Upon biting in to it he soon realised his pie was missing something, cheekily posting to Facebook ‘Hey Balfours…. forget something?’

The fan posted a photo to Facebook of his lacklustre dinner, asking manufacturer Balfours if they had ‘forgotten something’.

He said the mediocre pie was offset by the fact he had received the tickets to the $450-a-head Australian Outdoor Living Chairman’s Function for free.

Making matters worse, however, was the fact the Crows 33-point lead vanished as West Coast sealed a memorable comeback victory.

Commenters quickly saw the humour in the situation, telling the fan the meal was the ‘worst sixteen bucks you’ve ever spent,’ mocking the exorbitant price of food at sporting events.

‘Looks like it’s full of Adelaide’s chances of winning,’ another said.

‘The new weight watchers range from Balfours,’ one person said. 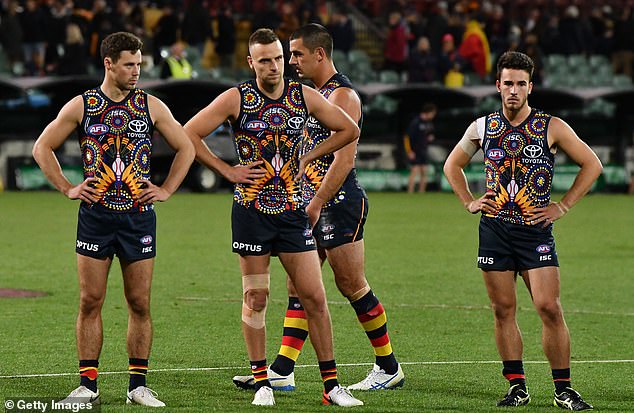