A championship winning ballroom dancer who had to give up her passion due to scoliosis is finally able to dance again after a life-changing surgery.

The heartbreaking story of Anastasia Manchenko details how she had to retire from dancing at the age of 14 because her condition was so bad and her spine looked like the letter S.

The now 17-year-old didn’t let her horrible condition stop her from pursing what she loves to do most and took a chance when she chose to get an experimental back surgery that realigned her spine and changed her life.

Story: A championship winning ballroom dancer (right) had to give up her passion due to scoliosis, a curvature of the spine 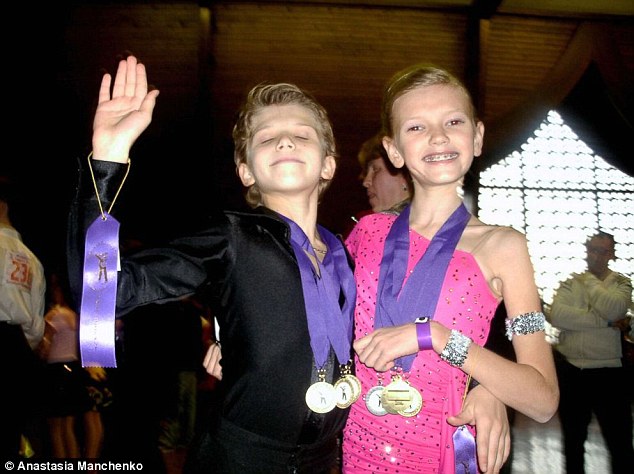 Sad: Anastasia Manchenko (right) details how she had to retire from dancing at the age of 14 because her condition was so bad and her spine looked like the letter S 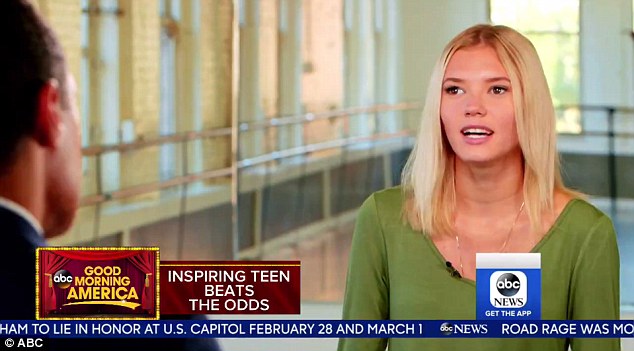 Today: Now 17-years-old (pictured) she shared her story on GMA about not giving up and took a chance when she chose to get an experimental back surgery that realigned her spine

Appearing on Good Morning America, Anastasia shared her inspiring comeback story and was even surprised when her idol from Dancing With the Stars, Mark Ballas, showed up to give her a hug.

Anastasia has always loved to dance and even believes she was born to do it but her serious condition of scoliosis, curvature of the spine, was debilitating and only getting worse.

She described the intense pain on GMA, ‘It was like a stabbing. A constant stabbing and it’s like someone’s taking your spine and they’re literally holding it and strangling it.’

Even though Anastasia looked happy in all of her photos and dance videos she was actually hiding extreme pain and was unwell.

Doctors offered to perform a surgery called Fusion that would straighten out her spine permanently but the catch was that it would limit her flexibility so much so that she would never be able to dance again and her career would be over.

So, she chose not to get the surgery saying, ‘I just didn’t want to give up. Something that you love to do, you do it no matter what.’

Instead of getting the operation she did years of physical therapy and used back braces so that she could keep on dancing, despite many doctors telling her she should not be dancing at all but it all came to screeching halt two years ago.

Anastasia and her partner Phil Beylison won the 2016 National Ballroom Championship and by that time her scoliosis was so crippling and her spine was extremely disfigured. 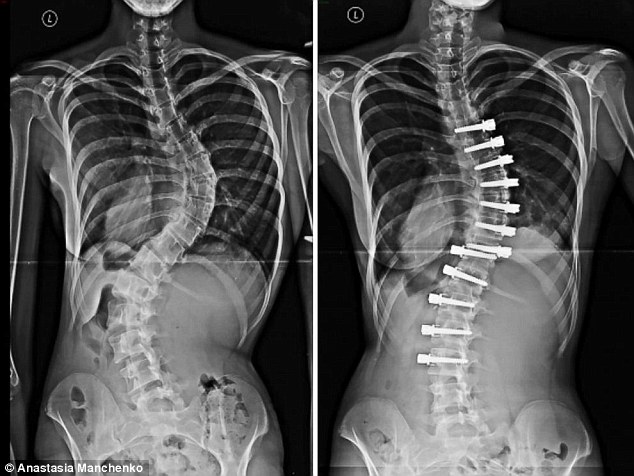 Surgery: After refusing to get Friction surgery which would end her dancing career, she opted for experimental Tethering and the X-ray pictures her back pre-surgery (left) and post (right) 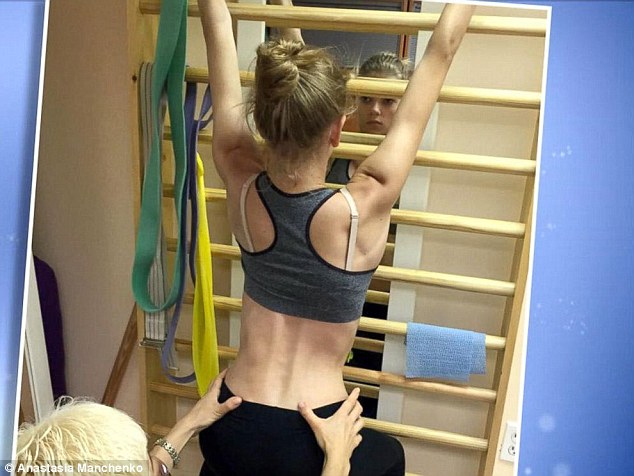 Healing: After getting the surgery that changed her life, it took her only six weeks to recover and she grew two inches as her spine is almost completely straight (pictured)

The day Anastasia won the championship she decided to hang up her dancing shoes and was done for good because she couldn’t continue life that way.

After giving up her career, she admitted it was not easy and that ‘It was just heartbreaking.

‘It’s my passion it’s what I love to do and when I dance everything is complete. I could breathe.

‘It’s like my breath of fresh air and it’s just heartbreaking because I couldn’t do it anymore and all of my doctors were against it.’

She even locked all of her dancing clothes and shoes in her parents room far away so she wouldn’t be able to see it.

‘I cant just go into my room and see all of my gold medals and be reminded of something I can’t do anymore,’ she confessed. 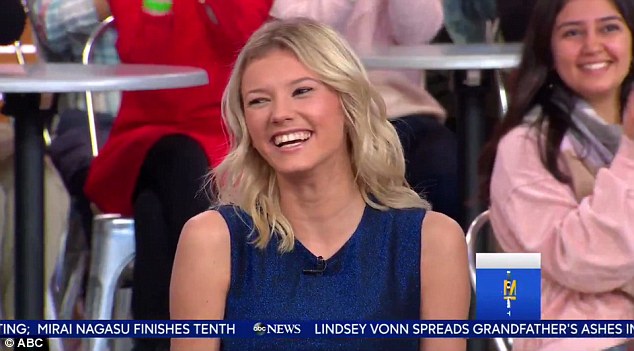 Love: Anastasia (pictured) shared that she loved Mark Ballas and Dancing With the Stars because it got her through her painful ordeal 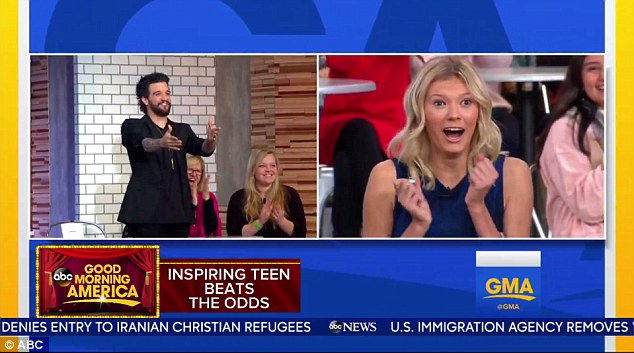 Surprise! Mark, 31, (pictured) surprised her on the show and gave her a hug while she screamed in shock and joy

Even though she was in excruciating pain and couldn’t carry on, she missed dancing more than anything, saying, ‘The feeling when you’re on the dance floor. I don’t know it’s amazing.

So, she found a new doctor, Baron Lonner, who told her about a new procedure and now she is officially dancing again.

Dr. Lonner from Mount Sinai hospital told her about a new experimental alternative to the Fusion surgery called Tethering and it is still not FDA approved.

The Tethering procedure involves attaching a flexible cord to screws placed in the vertebrae and when the cord is tightened it pulls the vertebrae straight, like a puppet.

In July 2017 Anastasia decided to give it a shot because she was at rock bottom and the end results of Tethering were too tempting. 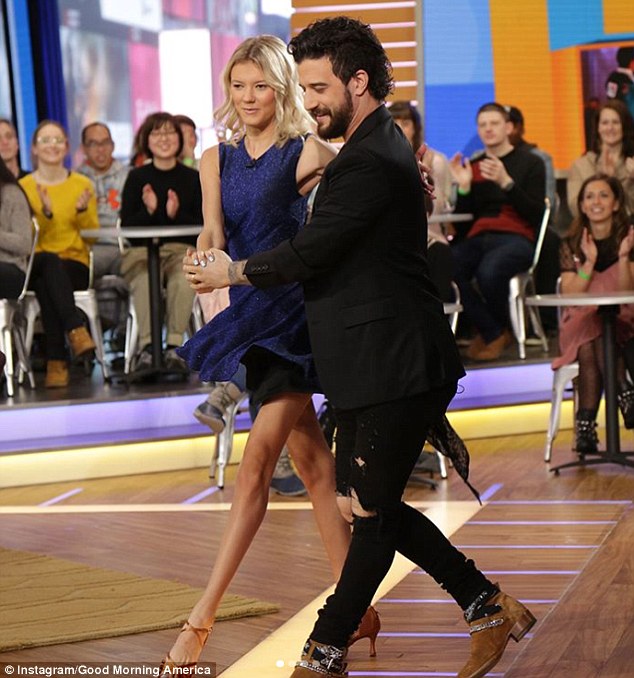 Adorable: Mark and Anastasia danced to 24K by Bruno Mars and it was so natural 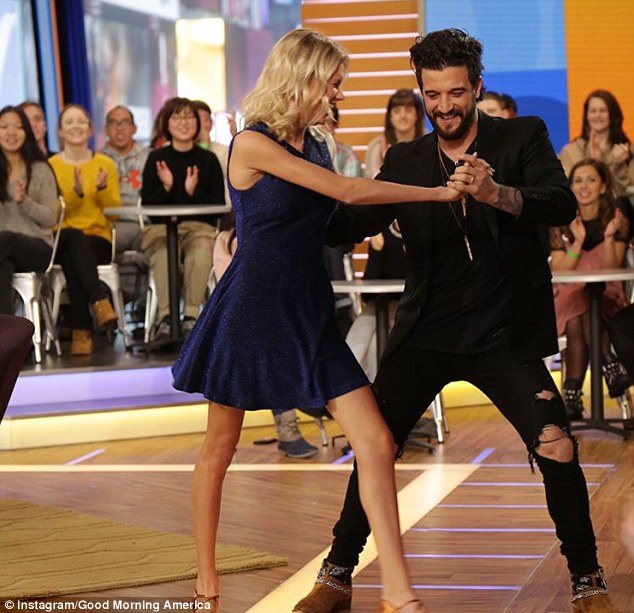 Amazed: Mark was so impressed by Anastasia’s dancing skills and they both looked amazing

‘It preserves and maintains flexibility for the patient as well as growth for those who are still growing,’ said Dr. Lonner.

After undergoing a full day operation where the doctor removed four ribs and then tethered the spine her surgery was a complete success.

Just a mere six weeks after the operation she was a full two inches taller and her back is almost completely straight now.

Anastasia was choking back tears as she told her doctor, ‘You changed my life. You made it so much better. Thank you so much.’

When asked how long her career will be now that she’s had the surgery, Anastasia responded with a huge smile saying, ‘My whole life.’

Watching Dancing With the Stars was life-changing and really helped her get through everything and she was obsessed with dancer Ballas, 31. 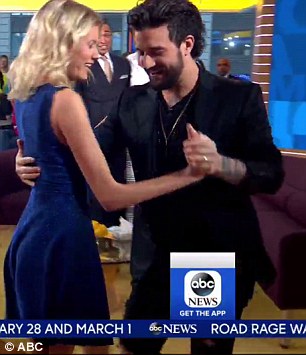 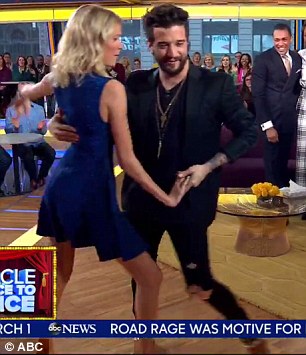 Obsessed: Anastasia admitted ‘I watched every episode I know every single one of his dances,’ about Mark 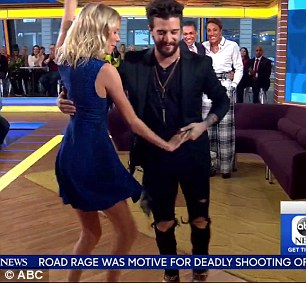 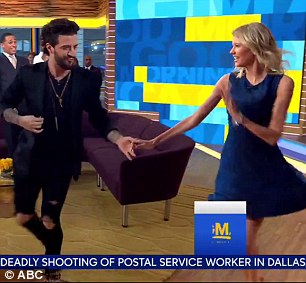 Motivation: ‘Watching the show inspired me to get back into dancing because it was around the same exact time that I was recovering,’ Anastasia said

‘I watched every episode I know every single one of his dances,’ she said laughing.

‘Watching the show inspired me to get back because it was around the same exact time that I was recovering and going to my physical therapist and they were like let’s do this step by step and when I came home and watched the show I was like okay I could do this!’ she shared.

After admitting she loved the show, Robin Roberts, 57, told Anastasia someone in the audience wanted to ask her question when all of a sudden Mark gets up saying ‘I have a question,’ and Anastasia was completely shocked.

‘My question is could I have the honor of getting a hug?’ and Anastasia ran towards him as the two embraced and then they started to play 24K Magic by Bruno Mars.

Once the song played and the couple started to dance, Mark was blown away at how good she was and was seriously impressed.

Scoliosis is the medical condition where the spine curves sideways.

The spine curvature disorder occurs most often during the growth spurt right before puberty.

Most cases of scoliosis are mild with very few symptoms while other cases like Anastasia’s can be severe.

Some of the symptoms may be uneven hips, shoulders or legs and in many cases the spine protrudes out of the back in an S shape.

If the curve gets worse the spine will eventually shift or rotate which causes the ribs on one side to stick out more than the other.

Often, if the condition is mild there is no treatment necessary and people can live with the chronic disorder forever.

If the scoliosis becomes severe sometimes a brace will help but if it gets worse surgery is the only option.

The most common surgery to repair the disorder is spinal fusion which joins all of the vertebrae into one single line to stop movement.

While doctors don’t know the cause of scoliosis, they do know that it is hereditary.