A Baltimore detective who died a day before he was to testify in a police corruption trial most likely killed himself, a panel reviewing the case has concluded.

Investigators had said Suiter was attacked while investigating a 2016 triple homicide with his partner in a high-crime neighborhood in West Baltimore in November 2017.

But now, Paul Siegrist, a lawyer for Suiter’s widow, said on Monday that Nicole Suiter was notified recently that an investigative review board believes her late husband’s death was probably not a homicide.

Siegrist said she is ‘shocked by their determination and very upset.’

The independent board impaneled earlier this year recently wrapped up its monthslong review, but its final report has not been released publicly.

WBAL-TV was the first to report that the panel concluded Suiter probably took his own life. 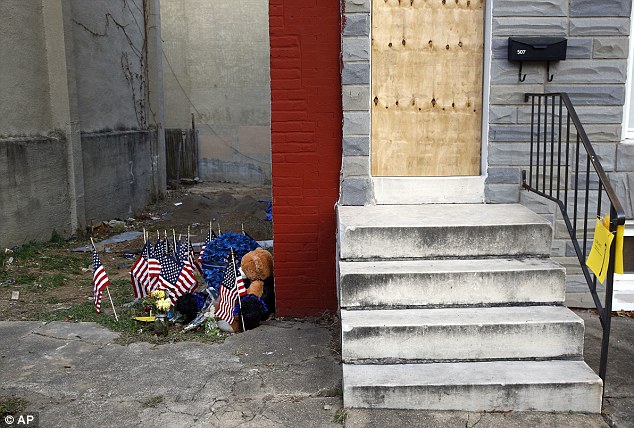 Investigators had said Suiter was attacked while investigating a 2016 triple homicide with his partner in a high-crime neighborhood in West Baltimore in November 2017. Pictured, a makeshift memorial at the scene in November

Suiter was shot in the head with his own gun the day before he was to testify before a grand jury investigating police corruption.

A spokesman for the city’s medical examiner said Monday evening that officials would not discuss any cases still under investigation.

The police version of events was questioned from the start.

Former Police Commissioner Kevin Davis, who was fired by the mayor in January, told reporters last year that Suiter approached a ‘suspicious’ man in a vacant lot between row houses, leading to a violent confrontation in which he was shot with his own gun.

His partner could be seen on private surveillance video taking cover across the street, according to police. 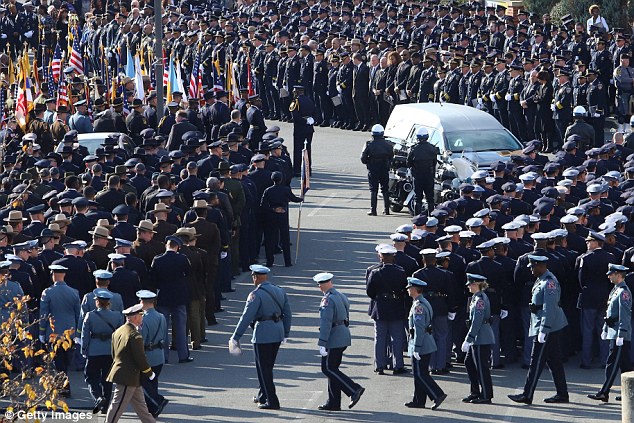 Suiter was shot in the head with his own gun the day before he was to testify before a grand jury investigating police corruption. Pictured, his funeral

As rumors went into overdrive, authorities said there was no evidence to suggest Suiter’s scheduled testimony in the federal corruption investigation led to his death.

And in late December, the FBI declined to accept Davis’ request for federal agents to lead the homicide probe, sending a letter to police saying they believed it would be ‘prudent’ for city detectives to continue leading the inquiry.

The unsolved case has remained a homicide investigation led by Baltimore detectives ever since.

Before he resigned earlier this year after a very brief tenure, former Police Commissioner Darryl De Sousa said he did not know the origin of the few vague details about the lone attacker – identified as an African-American man in a black jacket with a white stripe.

When he announced that an independent board would review Suiter’s death, De Sousa stressed that the panel would examine whether they believed evidence pointed to a homicide, a suicide, an accidental injury or even ‘something internally within the department.’

It wasn’t immediately clear when City Hall officials and police authorities would comment on the board’s final report and publicly release its recommendations.