Workers from an ethnic minority background are suffering disproportionately from the crisis the hospitality industry has suffered this year, according to a new report.

The think tank found that one in twelve BAME workers are employed in the hospitality sector, one of the industries most harmed by the coronavirus pandemic, compared to just five per cent of White British workers.

When considering a person’s age, qualifications, experience, and the particular jobs they do, non-white males were paid on average 65p per hour – or 7 per cent – less compared to a white British man.

BAME and white British women had a slightly smaller wage penalty of 5 per cent and 3 per cent respectively, in a sector that had the lowest median hourly pay in the country at just £8.72 per hour in April against £13.68 across the UK overall.

There are notable differences between individual ethnic groups within the BAME demographic though, with the analysis stating that ‘no single ethnic group does better or worse than others across the board.’

Indian workers had the biggest average hourly salary of any group (£8.96). They were also more likely to hold prominent positions such as hotel and restaurant managers.

An equal percentage of Pakistani workers held high-paying occupations within the hospitality profession, even though they were less likely to have degrees, and their overall median hourly wage is relatively low.

Analysis of Office for National Statistics (ONS) Labour Force Survey data from 2018 to 2020 also discovered they were searching for jobs at lower rates in the hospitality sector and wanted to work longer hours than their white British counterparts.

Separate ONS data from a fortnight ago revealed the hospitality industry had lost 297,000 jobs since the start of the coronavirus pandemic, the most of any sector and comprising over a third of all job cuts made by UK businesses. 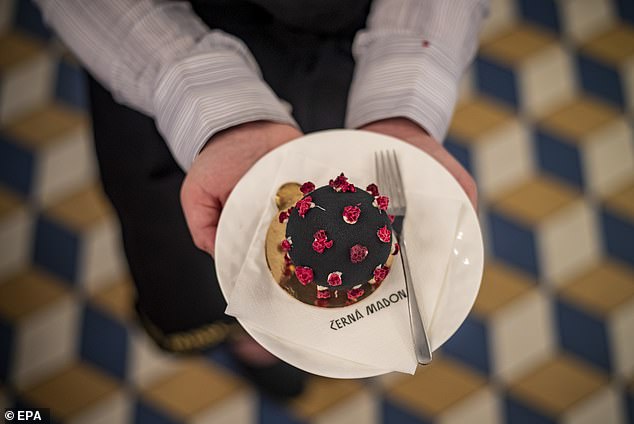 Recent Office for National Statistics data revealed the UK hospitality industry had lost 297,000 jobs since the start of the coronavirus pandemic, the most of any sector

Resolution Foundation senior economist Nye Cominetti said the impact Covid-19 is having on the 300,000 BAME employees who work in hospitality is ‘huge.’

He added: ‘But it is not just the pandemic that is affecting the pay of BAME workers in hospitality; they also experience significant pay penalties relative to White British workers in a sector that already has very low levels of pay.

‘As workers from BAME backgrounds are disproportionately likely to work in hospitality, a significant number of workers risk moving into unemployment when the furlough scheme ends in the Spring. The Government should bear that in mind for the jobs support programmes it is providing.’

Current public financial support measures allow companies to put their workers on furlough and claim 80 per cent of their wages for hours not worked for up to £2,500 a month until April 30 2021.

Local Restrictions Support Grants also help businesses such as pubs, restaurants, and bars that must remain closed if their venues are based in certain tiered areas.

Despite this level of support, redundancies are still expected to occur in the hospitality sector in considerable volume over the coming year.