BAME workers and single parents have suffered the most financial hardship since coronavirus pandemic began, according to new survey

BAME workers and single parent families have been the worst affected groups by the coronavirus pandemic, according to new research.

Research from the Institute for Social and Economic Research at the University of Essex shows that more BAME workers have lost their jobs after being furloughed than non-BAME groups.

Meanwhile, the loss in weekly earnings for single parents families is over twice as much as the loss for families with more than one adult and children.

Over 17,000 people aged between 20 and 65 took part in the regular survey ‘Understanding Society’, one of the largest household surveys in the world.

While the average earnings for non-BAME groups fell from £547-a-week in February to £503-a-week in April, those from black, asian and minority ethnic groups have seen their weekly earnings drop from £441 to £404 in the same time period. 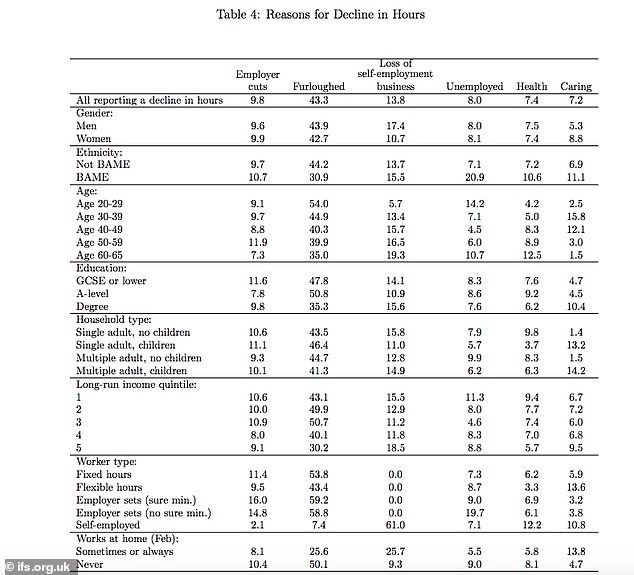 Data from the Institute for Social and Economic Research at the University of Essex shows that 20.9 per cent of BAME workers lost their jobs following a reduction in hours compared to just 7.1 per cent of non-black asian and minority ethnic group workers

And of those BAME workers who suffered from a decline in working hours due to the global pandemic, nearly 31 per cent lost their jobs compared to just 7 per cent for non-BAME workers.

The struggle for single parent families has been revealed in the ISER survey, with their average weekly earnings dropping from £326 in February to £253 in April, a loss of £73.

Meanwhile, families with more than one parent and children have lost £36 on a weekly basis between the same months, with wages falling from £511-a-week to £475-a-week. 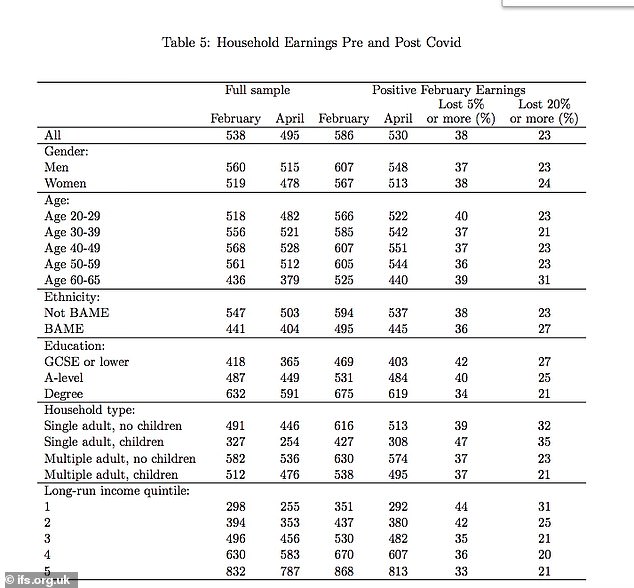 Meanwhile, BAME workers (£44) and single parent families (£73) have had significant losses in terms of average weekly wage groups. The survey asked 17,000 people aged between 20 and 65 years of age.

Thomas Crossley, the associate director for scentific content of the survey, said: ‘These new data shows us that the economic shocks caused by the pandemic have affected unevenly across the UK.

‘We know from this first look at the data that twice as many people expect their financial situation to get worse as those who expect it to get better.

‘This rises to three times as many in the lowest income bracket, and among single parents.’

‘The BAME figures are particularly striking and we need to urgently understand the source of the difference.’