The trial has begun for a former doorman who is accused of stalking and murdering two prominent Boston doctors in their penthouse condo.

Teixeira is fighting a first-degree murder charge in the May 2017 stabbing murders of anesthesiologists Richard Field, 49, and Lina Bolanos, 38, who were engaged to be married.

A native of West Africa, Teixeira avoided deportation a year before the murders, when he struck a plea deal on a bank robbery charge.

Bampumim Teixeira, 32, looked on quietly as the jury heard opening statements on Thursday 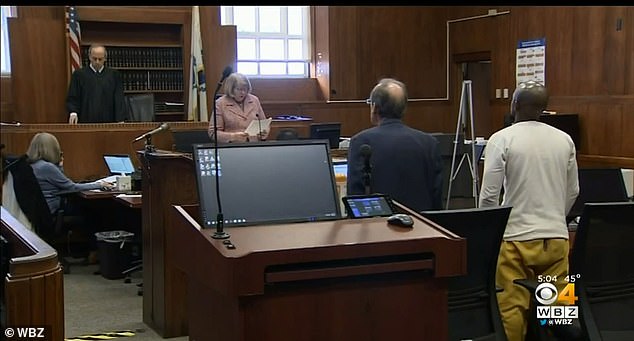 Teixeira was dressed casually in a thermal short and sweatpants for the first day of trial. He is charged with first-degree murder, armed robbery, and kidnapping 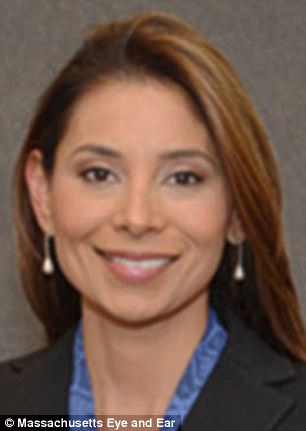 The defendant briefly worked as a doorman in the couple’s luxury South Boston apartment complex, and prosecutors say he used his intimate knowledge of the building and tenants to meticulously plan the brutal murders.

‘As Lina Bolanos was getting ready for work that morning another person was making his way to South Boston – looking, waiting, lurking out front and out back for just the right opportunity to present itself. And it did,’ Suffolk assistant district attorney John Pappas said in opening statements, according to the Boston Herald.

Pappas said that during the day, while the couple were working, Teixeira snuck into their condo with ‘implements of destruction’ including knives, handcuffs, duct tape and pliers.

When Bolanos arrived home around 5pm, prosecutors say that Teixeira was already inside the condo waiting for her.

Around 6.30pm, Field arrived at the condo, where he must have been met with a horrific scene. 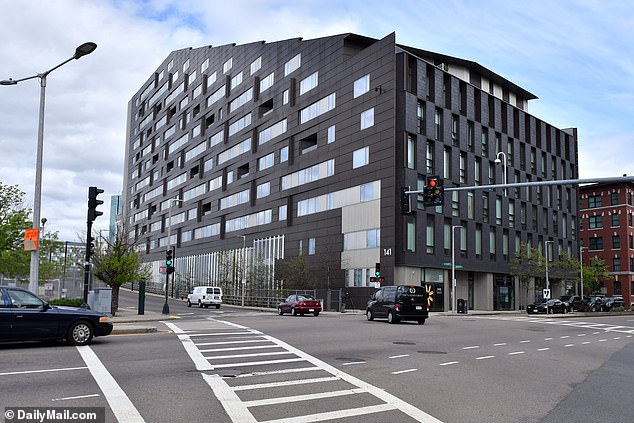 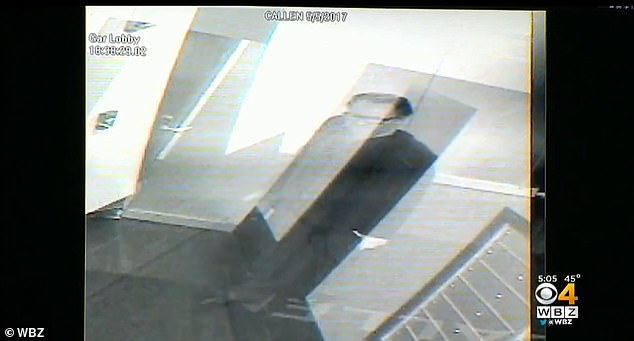 Lobby surveillance video shows that Field arrived home at around 6.30pm. Over the next two hours, he attempted multiple 911 calls that disconnected before he could plead for help 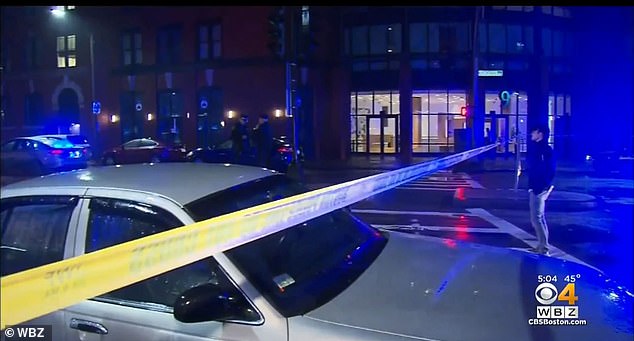 Over the next two hours, Field attempted to make a number of 911 calls on his cell phone, none of which lasted long enough to provide dispatchers with information.

Eventually, Field was able to text a friend who alerted police, and officers rushed to the penthouse.

When cops arrived, they found Bolanos’ keys still sitting outside of the door in the hallway.

Inside, the lights were all turned off and the officers yelled, ‘Boston police! Make yourself known,’ prosecutors say.

At that point, they saw a single individual charging at them brandishing what they thought at the time was a gun. Cops fired two shots, wounding Teixeira.

As the officers searched the rest of the apartment, they first found Field dead in a pool of his own blood, with his hands handcuffed behind his back.

As they moved into the bedroom, they found an even grislier scene, where Bolanos lay dead in a pool of blood with multiple stab wounds to her neck. 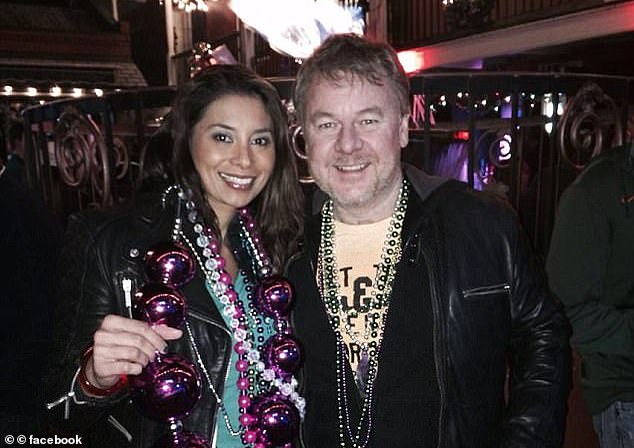 Both Linda Bolanos and Richard Field filled their Facebook pages with photos of them traveling the world and the United States. In this photo, they were in New Orleans for Mardis Gras 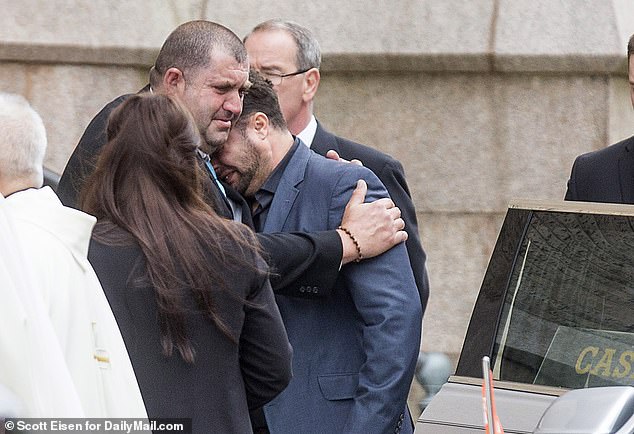 Mourners hold each other after the boxes holding the ashes of slain South Boston doctors Dr. Richard Field and Dr. Lina Bolanos were brought out from the church during their funeral 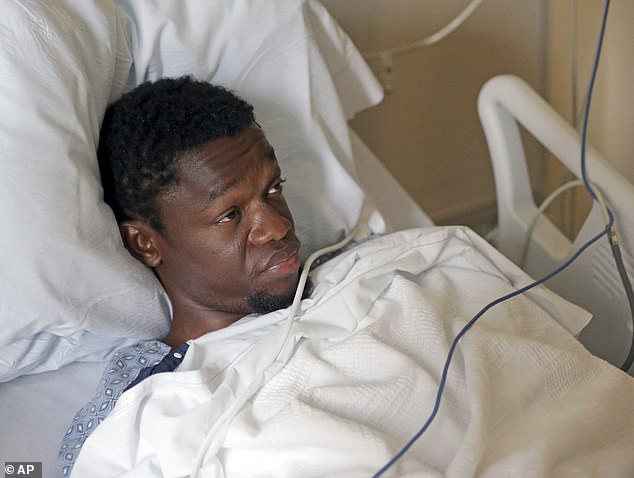 At Tufts Medical Center in Boston on May 8, 2017, Bampumim Teixeira recovers from gunshot wounds received when he was arrested inside the penthouse where the murders occurred

Near the door, cops found a bag stuffed with Bolanos’ jewelry and other property.

In his opening argument, defense attorney Steven Stack urged jurors not to be swayed by the ‘graphic and gory’ evidence.

‘No credible evidence will tell you that Bampumim Teixeira broke into the home of Lina Bolanos and Richard Field and murdered them on May 5th of 2017,’ Sack said in his opening statement, according to WBZ-TV.

Stack did not deny that Teixera was inside the apartment when the bodies were found, only that he broke in or had anything to do with the murders.

The trial is expected to last up to two weeks. 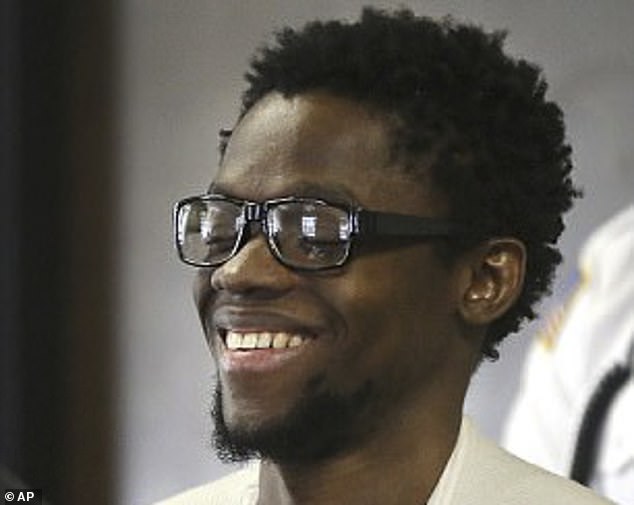 Teixeira grins on at his arraignment the month after the murder. His attorney insists that there is no evidence that he broke into the apartment or killed the couple