Getting approved for a mortgage could become easier for some borrowers, as the Bank of England will no longer require lenders to carry out an affordability ‘stress’ test.

The central bank test had required lenders to calculate whether borrowers would still be able to afford their monthly payments if interest rates rose 3 per cent above their providers’ standard variable rate (SVR).

In June the average SVR reached a 13-year high of 4.91 per cent, according to Moneyfacts, following a rise of 0.51 per cent since December 2021.

This means borrowers’ finances were effectively being tested against mortgage rates of almost 8 per cent.

Stress test scrapped: The Bank of England has relaxed the rules around mortgage affordability, but lenders aren’t expected to overhaul their borrowing criteria

The test was introduced in the wake of the global financial crisis to prevent banks and lenders building up loan books with a high risk of defaults.

SVRs are are the ‘default’ rates that borrowers move to when fixed term deals end and they are usually move expensive.

The majority of borrowers therefore switch to a new fixed mortgage deal and don’t end up on their lenders’ standard variable rate.

Those trying to get on to, or move up, the property ladder, may hope the removal of the test means they are more likely to be approved for a mortgage.

However, banks and building societies could still opt to keep the test – or something similar to it – in place, despite the change in policy from the Bank of England.

Other borrowing restrictions also remain. Most high street lenders do not allow buyers to borrow more than 4.5 times their annual income, for example, although some may go slightly higher depending on the circumstances.

Ben Tadd director at Lucra Mortgages, said: ‘The scrapping of these affordability tests, as of today, does very little to help people borrow more money to buy a home.

‘It is certainly a small step in the right direction, but the bigger issue of restrictive loan to income multiple caps needs to be resolved.

‘It does in theory marginally widen the pool of people now eligible for a new mortgage, but certainly for first time buyers at least, it still does not go anywhere near far enough to help those trying to buy their first home.’

Individual lenders are yet to reveal what action they will take, if any.

Once one lender announces a revised policy on stress tests, he says others are likely to follow.

‘Often when one domino falls others do follow suit, a precedence is set so if anything happens a bank can almost say “well that is how every lender does it”,’ he said.

The FCA’s Mortgage Conduct of Business responsible lending rules still require lenders to make a broad assessment of affordability before approving a loan. 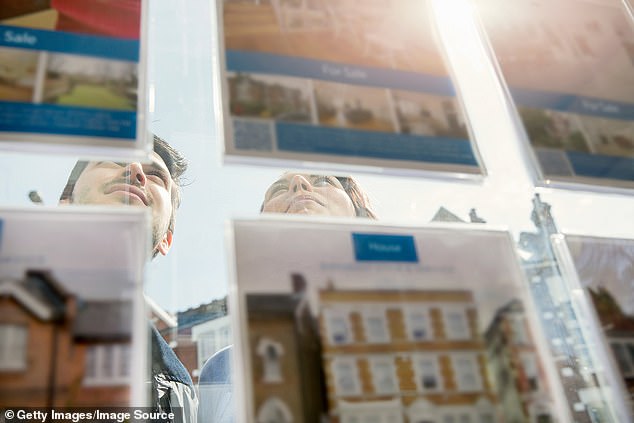 As inflation continues to rise and household costs such as energy bills increase, it is increasingly difficult for many first-time-buyers to save for a deposit

With mortgage rates on the rise at the moment thanks to increasing inflation, some mortgage brokers say that lenders could be reluctant to relax their affordability checks.

Ray Boulger, senior mortgage technical manager at John Charcol said: ‘The biggest danger to the market is a big and quick increase in mortgage costs, because people have got used to bank rates at these very low levels.

‘I think most lenders will want to apply a test still close to 3 per cent until rates appear to be near to peaking.’

When assessing a potential borrowers’ finances, most lenders use Office for National Statistics data to estimate the average monthly cost of things like bills and food.

These costs have been rising recently, and banks have been factoring this in to their affordability calculations, making it tougher to get approved.

James Miles, mortgage adviser at The Mortgage Quarter, said that banks could possibly use this extra flexibility to offset the impact on mortgage applications of Ofgem’s energy price cap in October.

‘Hopefully some lenders use this flexibility by the Bank of England to offset some of the rising costs and become more flexible with affordability again – while still taking a responsible approach to lending of course,’ he said.

‘The biggest concern is the ever increasing living costs that will reduce how much first-time-buyers can borrow as most lenders use ONS figures to work out disposable income.’

The average property now costs nearly nine times the typical salary, as house price affordability in England has hit the worst level ever recorded by the ONS.