Homeowners stuck in flats they cannot sell due to a red-tape nightmare are now so desperate they are flogging their properties at enormous discounts.

Lenders have been refusing to offer mortgages on tens of thousands of homes after new safety rules were introduced in the wake of the Grenfell Tower fire.

But homeowners say they face bankruptcy if they cannot sell their properties, as many expect crippling bills for repair work and rising mortgage payments.

The fiasco means growing numbers are now turning to firms that pay cash for unwanted properties at cut prices, Money Mail can reveal.

Some owners have been left with no choice but to accept reductions of up to 40 per cent on their asking price.

While many cash-buying firms offer a legitimate service, the industry is unregulated, and experts say vulnerable sellers could be exploited.

One trader was kicked out of a private Facebook group for cladding victims in Manchester after a member complained that he had been using it to drum up business.

The companies involved say they expect to make sizeable profits on the flats in future. But others say the properties are too risky even for them.

‘People will have put all of their life’s savings into buying these properties. Yet now, through no fault of their own, they’re losing all that. This is a desperately stressful situation for them.’

Jamie Nelson-Singer is selling his flat to a property firm at a 40 per cent discount to avoid bankruptcy.

But earlier this year, he lost his job in aviation due to the pandemic and decided to move abroad with his girlfriend, 31-year-old Elizabeth Eaton. 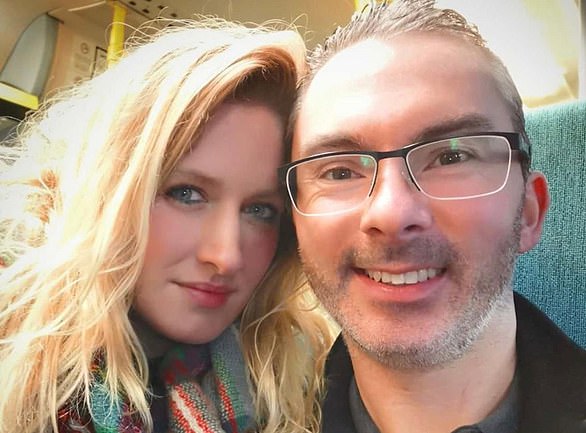 Trapped: Jamie Nelson-Singer(pictured with girlfriend with his girlfriend Elizabeth Eaton) is selling his flat to a property firm at a 40 per cent discount to avoid bankruptcy

But the deal collapsed after the eight-storey building was found to have flammable cladding.

He then approached a firm who initially said they could buy his flat for £190,000 cash – but it, too, pulled out because of the risks involved.

Jamie considered selling at auction but says he is likely to accept an offer of £155,000 from the home-buying firm Good Move.

He says he is forking out around £8,500 a year in mortgage payments, building fees and other costs on the flat.

He can’t get a buy-to-let mortgage to rent it out and could face a crippling bill to remove the cladding.

Jamie says: ‘I’m not sure what I have done wrong. I worked hard, paid my taxes, only to have everything I paid into my property wiped out.’

Nima Ghasri, managing director of Good Move, says the firm has seen a ‘significant increase’ in inquiries from sellers like Jamie.

‘Our strategy has been to retain these properties and take a long-term view, factoring in any risks and costs to the purchase price,’ she adds.

However, she says the firm has already reached its limit and cannot buy more flats with cladding at this time due to unanticipated demand.

New rules mean homeowners require an EWS1 form to prove their building is free of dangerous cladding, but there are fewer than 300 engineers qualified to carry out the survey on 1.5 million affected flats.

Homeowners have been told they may have to wait up to ten years to get the form.

The Government has set aside £1.6 billion to help fund repair work, but MPs expect total costs to amount to £15 billion.

It means some leaseholders face bills of up to £115,000 each to make their homes safe. An estimated 30,000 sales have already collapsed due to the issue.

MPs and campaigners are calling on the Government to pay for the work to be done, but earlier this week building safety minister Lord Greenhalgh said ‘some costs would fall on leaseholders’.

Tommy Hughes, director of We Buy Property, says he has bought half a dozen flats with cladding issues at 60 to 70 per cent of market value over the past three months.

He adds: ‘We hope to be able to make a 10 to 15 per cent profit on these properties somewhere down the line.’

There is just no end in sight to this nightmare 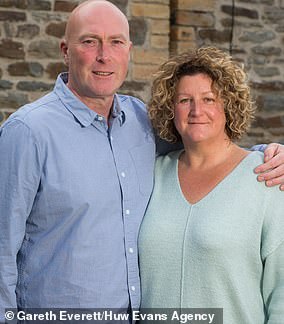 Sharon and Edward Delahaye face a bill of £30,000 to replace dangerous cladding

The finance manager says she faces a bill of £30,000 to replace dangerous cladding, which – with rising mortgage repayments – may mean she simply has to ‘hand the keys back’ to the lender.

In January 2018, she and husband, Edward, 50, decided to sell it to pay off the mortgage on their home in Llanelli, South Wales.

They accepted an offer for £165,000, but the sale collapsed after the buyer could not get a mortgage due to unsafe cladding.

Sharon was then approached by a cash buyer on a Facebook group who said he could offer her £91,000 – which he dropped to £80,000 after he claimed the repair bill would be closer to £50,000, and that was rejected.

Sharon says: ‘We cannot sell, we cannot remortgage and there’s no end in sight for when this nightmare will be over.’

The cash buyer was removed from the Facebook group after Sharon complained. 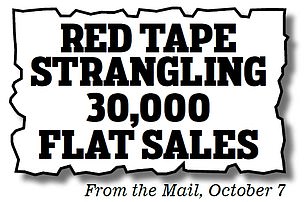 It’s a sinking feeling when, after months of offers, counter offers and searches, a carefully constructed housing chain falls through.

Just recently for me, this was down to a flat further up the chain in a building that didn’t comply with new fire safety rules on cladding.

But in the case of fire safety, it’s important to remind ourselves why what seems like unnecessary red tape is necessary.

Grenfell showed that building safety rules in this country needed updating and the Government has since introduced stricter standards.

As you would expect, mortgage lenders have been seeking assurances that buildings comply with these new rules.

This gives house buyers the confidence that their properties are safe. But lenders and valuers are not fire safety experts — which is why additional checks are needed.

The EWS1 process was meant to help borrowers buy safe homes, not to obstruct or frustrate them.

However, updated guidance has stated that all multi-occupancy buildings should undergo an assessment, rather than just those over 18 metres.

This has put additional strain on the system and, compounded by the impact of Covid-19, left many homeowners unable to remortgage or sell their properties.

Lenders have since confirmed that anyone coming to the end of their current fixed-rate mortgage will be able to get the best available new product with their existing provider, regardless of whether they have had an EWS1 assessment. But, clearly, this is not a solution for everyone.

As a start, greater clarity is needed on which buildings can be deemed low-risk and therefore not in need of the EWS1 process.

This would enable fire safety experts to focus on assessing those buildings most at risk.

The UK must also ensure cladding in at-risk buildings is swiftly identified and replaced.