Dozens of banks are ‘cynically’ pulling their cheapest mortgage deals and raising rates days ahead of an expected interest rate hike next week.

It means new borrowers could be hit by a double blow of home loans effectively going up twice – now and then again if the Bank of England acts on Thursday.

Money Mail research found 35 lenders including Barclays, HSBC, NatWest and Halifax had either increased rates or withdrawn their best deals since the beginning of the month.

In some cases, they have increased rates by as much as 0.9 percentage points, adding more than £800 a year to the cost of a typical mortgage.

Lenders have also withdrawn the last of the cheap fixed mortgages below 1 per cent, meaning the best deal now costs 1.09 per cent a month.

This week Barclays and TSB both increased their fixed mortgages for new customers by up to 0.2 percentage points, Sainsbury’s by 0.26 points.

The increased costs apply to new applications for fixed or variable rate deals and affect only new customers.

Experts last night accused banks of hitting borrowers with stealth rises to mortgage costs before the Bank of England had even put pen to paper on a base rate hike. 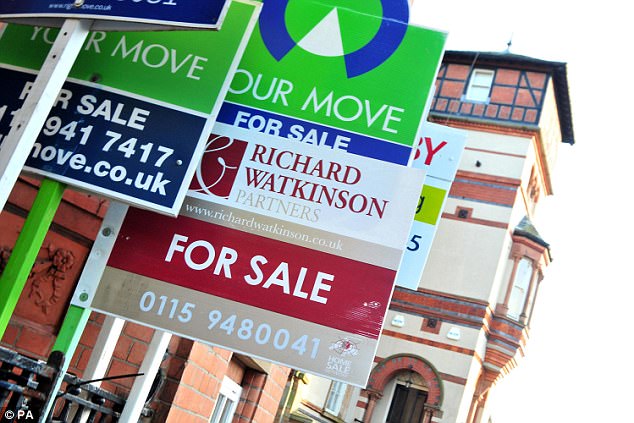 Money Mail research found 35 lenders including Barclays, HSBC, NatWest and Halifax had either increased rates or withdrawn their best deals since the beginning of the month. File photo

On Thursday policymakers at the Bank of England are widely tipped to hike rates for the first time in a decade.

Economists expect the base rate, which is currently 0.25 per cent, to rise marginally – perhaps to 0.5 per cent. One broker, who declined to be named, called the tactics ‘cynical’.

Dominik Lipnicki, of mortgage broker Your Mortgage Decisions, said: ‘This is typical behaviour by lenders. They know that talk of interest rates rising will frighten borrowers and prompt them to remortgage so they use it as a way of boosting their profits.’

Ray Boulger, of mortgage broker John Charcol, said: ‘Rates are still relatively low so there is still time to get a good deal, but we have probably seen the lowest deals gone for good.

A spokesman for UK Finance, which represents the banks, said: ‘Mortgage rates have been at historic lows the past few years and customers have a wide range of products available to them to suit their individual needs.’