Images of the aircraft flying the banned symbol also featured the website SCV.org. The Sons of Confederate Veterans of Columbia, Tennessee, claimed it had paid for a similar banner over Talladega last month.

NASCAR in June banned the flag at its events, but protesters at Talladega Superspeedway in Alabama also paraded past the main entrance waving them from their vehicles.

Wedensday’s race would likely be the largest sporting event in the United States since March, organizers have said. The All-Star Race was moved from Charlotte Motor Speedway for just the second time since its 1985 inception because Tennessee officials allowed Speedway Motorsports to sell up to 30,000 tickets.

A Confederate battle flag is pulled behind a plane over Bristol Motor Speedway before the NASCAR All-Star auto race in Bristol, Tenn, Wednesday 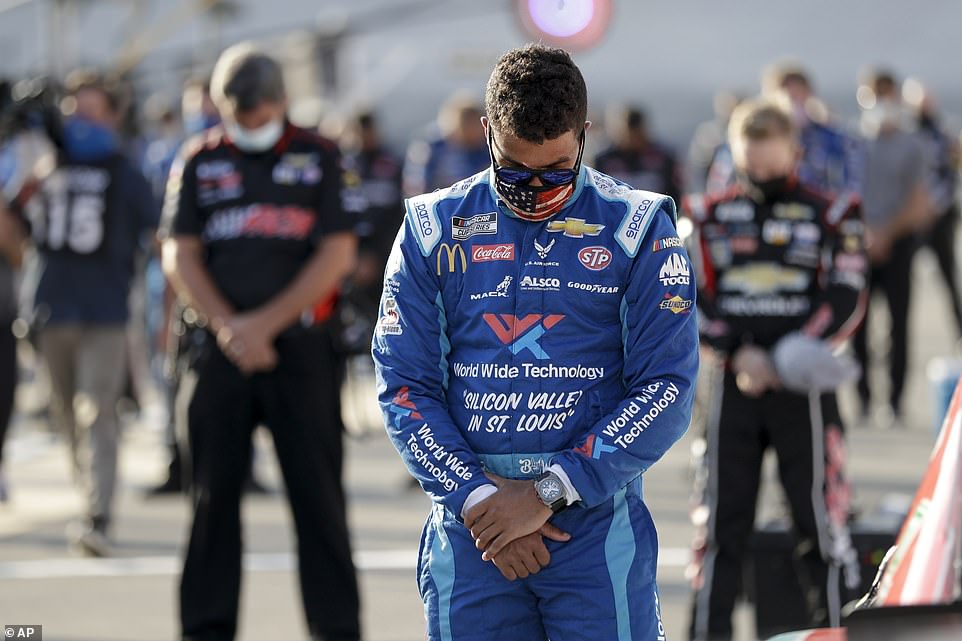 Bubba Wallace, the sport’s only full-time Black driver, was at the event Wednesday. It was at last month’s race that a crew member reported finding a noose in the team garage stall.

President Donald Trump then wrongly accused Wallace of perpetrating ‘a hoax’ after federal authorities ruled the noose had been hanging since October and was not a hate crime.

NASCAR and the FBI have exclusively referred to the rope — which was used to pull the garage door closed — as a noose. It was the only garage pull out of 1,684 stalls at 29 inspected NASCAR tracks to be fashioned as a noose.

And NASCAR President Steve Phelps has bristled at suggestions the noose was a hoax.

Wallace was shown a photograph of the noose, never personally saw it, and was told by NASCAR officials he was the victim of a hate crime.

‘Has @BubbaWallace apologized to all of those great NASCAR drivers & officials who came to his aid, stood by his side, & were willing to sacrifice everything for him, only to find out that the whole thing was just another HOAX?’ Trump tweeted. ‘That & Flag decision has caused lowest ratings EVER!’

Wallace responded on Twitter with a note to ‘the next generation and little ones following my foot steps’ in which he urged people to use their platform and not be detracted by ‘hate being thrown at you.’

‘Love should come naturally as people are TAUGHT to hate,’ Wallace tweeted. ‘Even when it’s HATE from the POTUS .. Love wins.’

Trump has also has criticized NASCAR for banning the Confederate flag, blaming the decision for the sport’s ‘low ratings,’ although TV ratings for NASCAR have been up since racing resumed.

NASCAR said Wednesday’s race would likely be the largest sporting event in the United States since March.

The Talladega Superspeedway plane pulled a flag that read ‘Defund NASCAR,’ a play on the ‘defund the police’ slogan of some protesting racial injustice.