The banned Infowars app launched by conspiracy theorist host Alex Jones is still online on Android’s Google Play with more than 100,000 downloads since it launched.

This is despite it being kicked off Apple, Twitter, Facebook and Spotify over repeated allegations of hate speech.

The 44-year-old has suggested on his shows that the 2012 Sandy Hook massacre was a hoax, among other sensational claims.

The Infowars website is also still thriving with 1.15 million visits last month – up 55 per cent compared to June.

The company said the app violated its rules against ‘objectionable content’.

The move makes Apple the latest tech company or social media platform to take action against Jones, a right-wing talk-show host based in Austin, Texas.

However, experts say that these bans are not affecting Jones’ commercial ventures.

‘Bans of Alex Jones and his affiliated network of Infowars accounts have yet to affect the brand’s main revenue generator — the storefront and e-commerce operations,’ Jonathan Albright, research director of the Tow Center for Digital Journalism at Columbia University told Washington Post.

‘When Jones makes the headlines, there is a distinct pattern of traffic surges to Infowars properties, including the store website’, he said.

According to Dr Albright, traffic to the Infowars website was highest on 7th August which was several days after he was banned from several social media sites.

More than 60 per cent of visitors to the site then visited PayPal, suggesting they also bought things from it.

This included ‘commentary about religion, race, sexual orientation, gender, national/ethnic origin, or other targeted groups, particularly if the app is likely to humiliate, intimidate, or place a targeted individual or group in harm’s way.’ 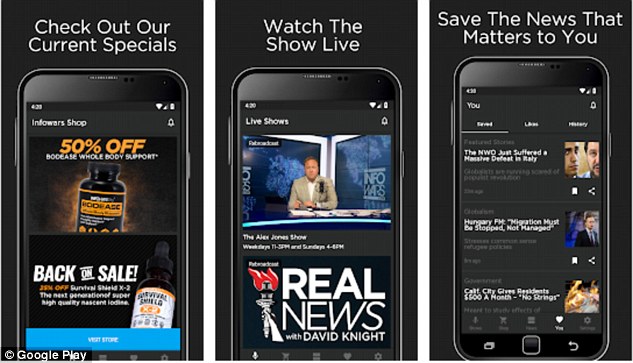 The Infowars website is still thriving with 1.15 million visits last month – up 55 per cent compared to June. The app is still available on Android’s Google Play (pictured)

WHO IS ALEX JONES?

Alex Jones is a controversial radio and podcast host based in Austin, Texas.

Jones says his ‘InfoWars’ shows, which are broadcast on radio, YouTube and other platforms, reach at least 70 million people a week.

Among other claims, he has called the 2012 Sandy Hook Elementary School mass shooting a hoax.

He was sued for defamation by families of some of the children killed in that attack, which left 20 children and six adults dead.

Among other claims, Alex Jones (file photo) has called the 2012 Sandy Hook Elementary School mass shooting a hoax. He was sued for defamation by families of some of the children killed in that attack, which left 20 children and six adults dead

He now admits the shooting occurred but says his claims were free speech. He has sought to have the lawsuit dismissed.

Jones has also claimed that the September 11, 2001 attacks on New York and Washington were staged by the US government.

While he began broadcasting his shows in 1999, Jones’ profile has spread from the far-right fringe in recent years.

While running for president in 2015, Donald Trump told Jones his reputation was ‘amazing.’

Last Thursday, Twitter permanently banned Jones and his website from its platform and Periscope, saying that the accounts had violated its behaviour policies.

In a video posted on the Infowars website, Jones said in response: ‘I was taken down not because we lied but because we tell the truth and because we were popular.’

Last month, Twitter banned Jones and Infowars for seven days, citing tweets that it said violated the company’s rules against abusive behavior, which state that a user may not engage in targeted harassment of someone or incite other people to do so.

Apple said at the time that the Infowars app remained in its store because it had not been found to be in violation of any content policies, although it had removed access to some podcasts by Jones.

A spokesperson said at the time the company ‘does not tolerate hate speech, and we have clear guidelines that creators and developers must follow to ensure we provide a safe environment for all of our users.’ 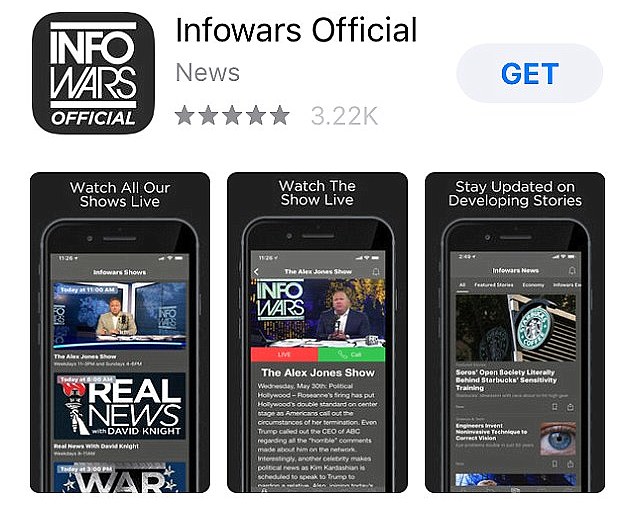 The Infowars app, run by controversial conspiracy theorist Alex Jones, rebroadcasts the talk-show host’s recordings each day. It has now been removed from the Apple App Store following similar bans of Jones’ content from Spotify, YouTube, Facebook and Twitter

The podcasts differ from the Infowars app by allowing access to an extensive list of previous episodes, subjecting all of those past episodes to Apple’s content rules.

The Infowars app contains only rebroadcasts of the current day’s episodes, subjecting a much smaller set of content to the rules.

Apple said it regularly monitors all apps for content violations.

It marks the latest in a cascading series of bans for Jones and Infowars, which the talk-show host claims reaches as many as 70 million people per week on platforms across radio, YouTube and podcast platforms.

Jones and Infowars’ accounts were removed from a litany of platforms in the past month, including Facebook, YouTube, LinkedIn and others.

Spotify led the charge by removing every episode of the Alex Jones Show from the streaming site in August.

Prior to this, Spotify had only gotten rid of specific episodes of the show, leaving most of the library up on its platform. 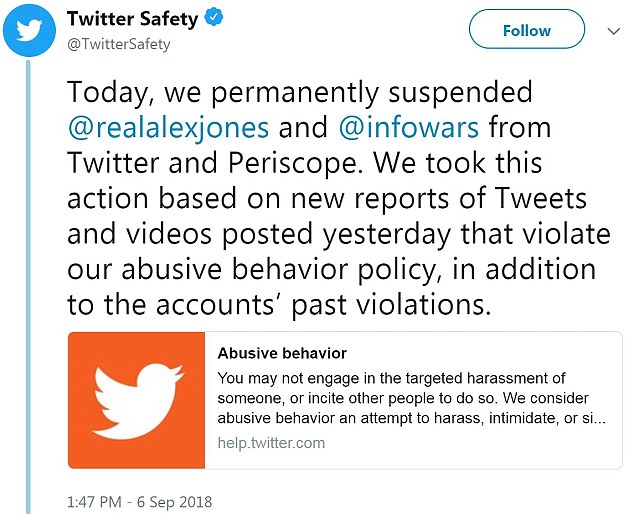 Last Thursday Twitter permanently banned Jones and his website from its platform and Periscope, saying that the accounts had violated its behaviour policies. The company announced its decision via a series of tweets (pictured)

Apple later announced it had removed the entire iTunes library for five of Jones’s six Infowars podcasts, including the shows ‘War Room’ and the daily ‘The Alex Jones Show.’

Not long after, Facebook said it would remove four pages belonging to Jones for posting content that violated its policies around hate speech and violence.

YouTube also removed The Alex Jones Channel, which counts close to 2.5 million subscribers, from its platform.