Two rival groups came head to head, throwing bar stools and glasses at The Arc bar in Headingley, West Yorkshire at 12.30am on February 17, earlier this year.

All the men are being sentenced after each pleading guilty to affray.

The altercation began when Thomas Walker, 24, and Matthew Wild, 23, confronted Harry Walker, 22, from the other group, Leeds Crown Court heard.

Prosecutor Howard Shaw told the court: ‘The scenes captured on the CCTV are more reminiscent of a saloon in Dodge City in the Wild West rather than a pub in Headingley.’

The court saw multiple punches being thrown and people being kicked and stamped on as they were on the ground.

The bar manager was also assaulted and was struck with a bar stool during the disturbance.

The 21 men who launch into a violent bar brawl ‘reminiscent of Wild West saloon’ now face jail time for the frenzied fight that happened at The Arc bar in Headingley, West Yorkshire earlier this year 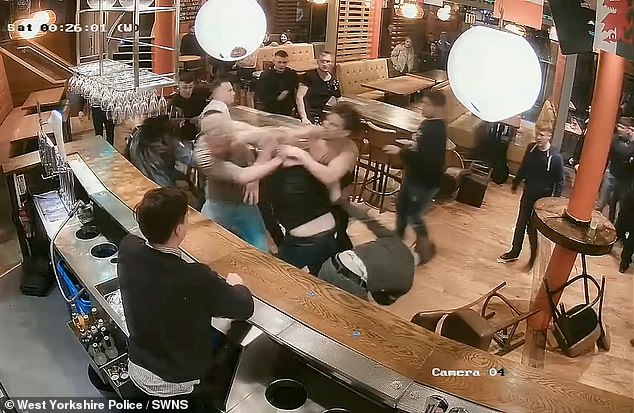 Marcus Lamb was the only one of the defendants who suffered injuries in the incident and taken to hospital suffering for broken ribs and received eight stitches on his head.

Mr Shaw said Lamb was initially treated as a victim until they saw his behaviour on the CCTV footage.

The violent footage begins with two men repeatedly kicking another man lying on the floor to the right hand side of the bar. 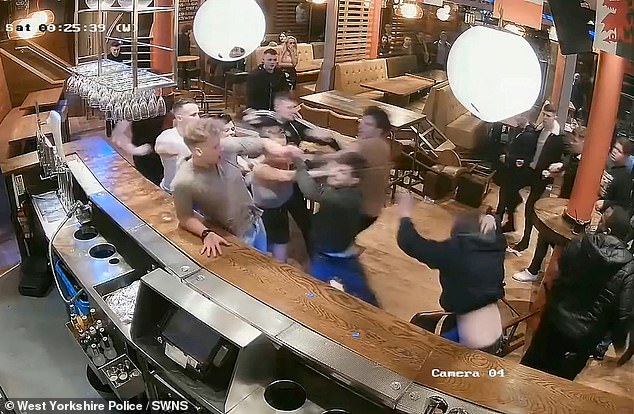 Another brawler then appears in a light brown T-shirt to push the men away from him but is then attacked by half a dozen others who push him towards the bar.

The lone bouncer dressed in a black jacket tries to intervene and stop people stamping on a man by the bar, but to no avail.

Behind them, a man in a black jacket with a white pattern on the front throws a glass at the main group of men, which triggers another round of punches.

A chair is then seen being hurled toward a man with a black hoodie and leaving him with a bloodied head before he leaps over the bar to escape the violence. 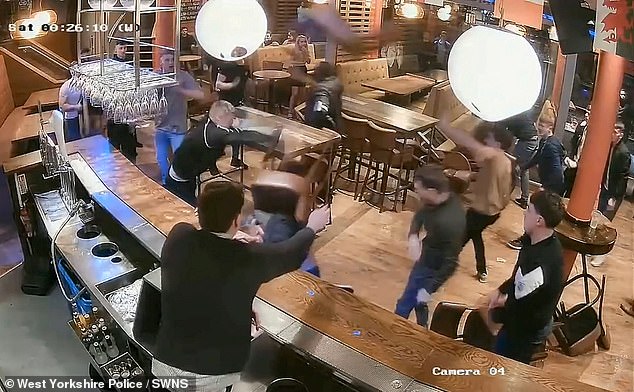 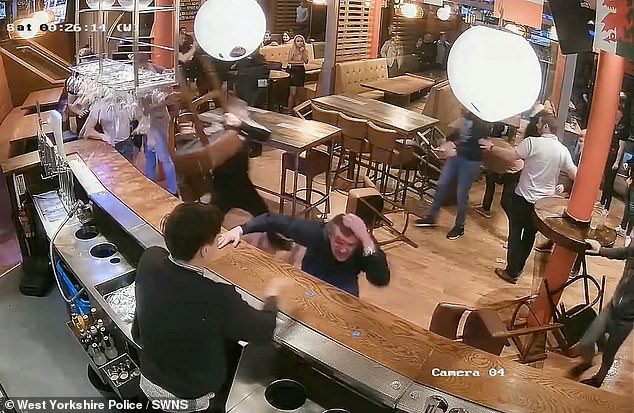 The prosecutor said police arrested the defendants in the weeks after the incident when the footage was realised during a media appeal to trace suspects.