A bar has hired a convicted sex offender to perform a drag act during its Pride weekend celebrations.

Wow Bar in Cardiff booked Darren Sewell – who is known by the stage name Crystal Couture – to appear on stage during its Pride Without Prejudice free event on Sunday.

Sewell, 34, was convicted in 1999 of four counts of rape of a boy under 16 and was sentenced to three years in a young offenders’ institution. 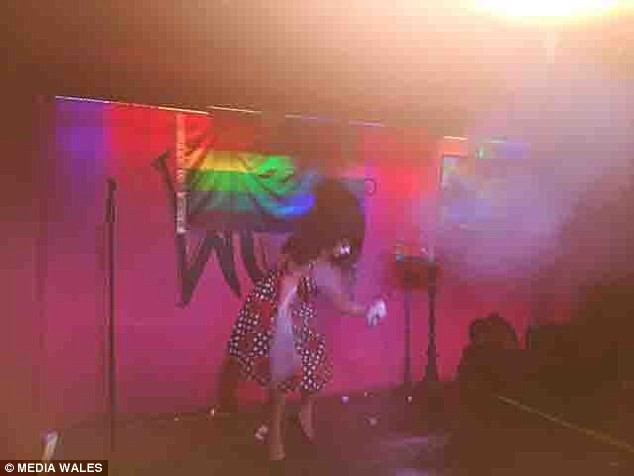 Sewell, pictured, was convicted of four counts of raping a boy aged under 16 in 1999 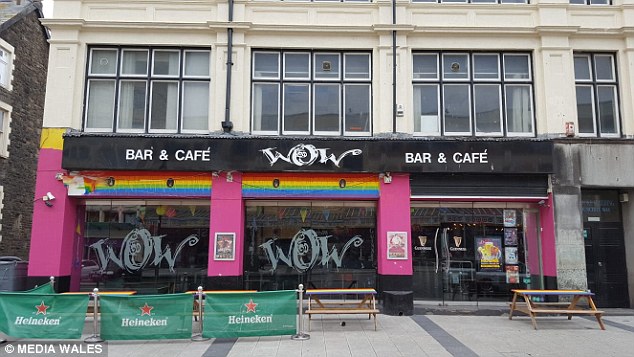 He was also ordered to sign on the sex offenders’ register and was banned from having any contact with children.

Witnesses to the event complained to staff after Sewell made jokes about paedophile BBC star Jimmy Savile.

Several people walked out in disgust due to the nature of Sewell’s act.

In 2011, Sewell was convicted of breaching the order banning him from contact with minors after he was found to be working as a gymnastics dance tutor with children in Cardiff.

Crystal Couture’s official website describes the act as ‘for audiences large and small and of all ages’ and ‘available for wedding, christening, birthdays, and celebrations if (sic) all types’.

The event at Wow Bar referred to Pride on its flyer but had no affiliation with the official Pride Cymru Big Weekend.

The man, who preferred not to be named, said: ‘I never realised it was him initially. So when he came on stage someone else in the audience said do you know who that is?’

He said he found articles reporting criminal proceedings against Sewell on his phone, and made complaints to staff at the venue.

‘Myself and the other people who I spoke to about it feel it’s just giving such a bad message.’

He added: ‘No laws (have been) broken but it’s the morals towards the community. They are allowing sex offenders to promote us during Pride.’

In 2011, Cardiff Crown Court heard Sewell, who was performing as a drag queen at Cardiff nightclub Minsky’s at the time, had spent three years teaching gymnastics to children as young as nine.

None of the gymnastics clubs knew of his previous conviction.

Sewell was a teenager when he was convicted of rape and was 27 when he breached the order banning him from having contact with children.

For breaching the order, he was sentenced to a three-year sex offender’s treatment programme, a 24-month supervision order, 300 hours unpaid work and a six-month curfew on electronic tag.

In a statement, representatives of Wow Bar confirmed that Darren Sewell performed at the club on Sunday, August 26, under the stage name Crystal Couture.

The statement read: ‘Mr Sewell, an established drag artist and singer, has preformed at many venues within Cardiff and around the country and is in demand due to his high polished performance.

‘The managers of all these venues have, like us, been made well aware that Mr Sewell was placed on the sex offenders list for a crime he committed in 1999.

‘We know this as Mr Sewell has a legal obligation to inform any employer of this fact. Like most, and we would hope all venues do; we researched, we also talked to other venues that employed Mr Sewell.

‘Aware Mr Sewell is on the sex offenders list we have always been cautious when booking Mr Sewell: He will always arrive late and preform (sic) late to ensure no risk of children present, we inform the police that he will be preforming at the venue and his act is carefully monitored by management.

‘With these measures in place and open communication to the police, we feel there to be no warranted risk to our customers; which will always be our top priority.

‘Mr Sewell is a popular entertainer booked by hundreds of venues a year, all in full knowledge of his past crime and Sewell himself shamed on public media ever since but rightly or wrongly that is his on-going sentence.

‘A customer on Sunday made his feelings known showing us an article from Argus (sic). He left but for us, if not most, it is such a conversation to hold in a noisy nightclub at that time of night, the debate never being the crime but what an individual feels the punishment should be.

‘Mr Sewell’s crime from 1999 is well known to the Cardiff scene but the demand to see his show is still supported heavily.

‘All venues in Cardiff or outside have had to sit down and make a choice, what we have all decided maybe judged wrong but our venue, no venue, would ever put anyone at risk.’