A bar has come under fire for a ‘tasteless’ poster advertising Corona beers for $6.50 ‘while the pandemic lasts’.

House on Hood, in Hamilton, New Zealand, posted a photo to their Facebook page of two men in hazmat suits and face masks holding up bottles of the Mexican beer.

‘Virus or no virus, we still think Coronas are pretty great, so while the pandemic lasts, we’re selling Coronas for just $6.50, all day, every day,’ the caption read.

‘Mention your corona loving mates to let them know about this great deal and you could be sharing a free one-metre pizza this Friday at House.’

House on Hood, in Hamilton, New Zealand, posted a photo to their Facebook page of two men in hazmat suits and face masks holding up bottles of the Mexican beer along with the ‘tasteless’ caption

‘We were unaware of the promotion and we do not condone it. We will be asking that it is discontinued,’ it said.

Social media users were also outraged by the bar making light of coronavirus, which has killed 133 people and infected more than 6,000 worldwide.

‘Worst advertisement ever. More than 130 people have died and many more is still suffering, whereas you guys are making fun of it, just to earn more money for your business,’ one person wrote.

‘Yikes. Not in the greatest taste, but go off I guess,’ said another.

‘How on earth do you think this is ok?! You wouldn’t run a ‘$6.50 on all aussie beers for the entire bush fire season’ so why is this okay?!,’ another comment read. 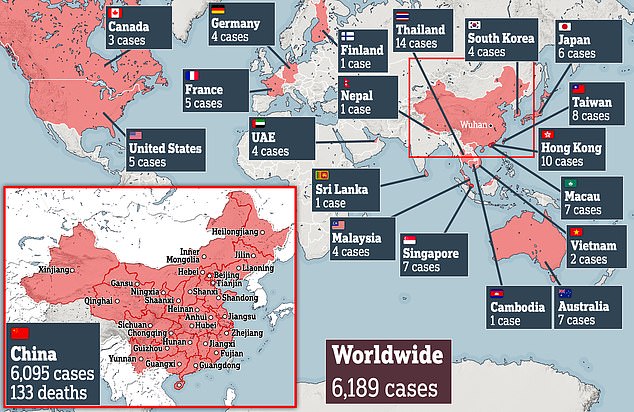 So far, the coronavirus that began in China last month has spread to over 6,000 people in more than a dozen countries

‘You gotta take this down aye. You’re making a mockery out of so many deaths’.

‘If the deaths would have happened in NZ then these guys wouldn’t have used this ad. Are they saying that people dying far off do not deserve the same empathy or respect and that their deaths don’t matter,’ another said.

But some were amused by the ad, calling it ‘brilliant’ and ‘pure genius’.

‘Love it! Pure genius,’ said another.

John Lawrenson, CEO of the Lawrenson Group, which owns and operates House on Hood, said there is a ‘small but loud minority of people who get offended by everything’.

‘So I’d just like to say thanks to all the snowflakes for the free advertising and thanks to everyone else with a sense of humour who liked the post,’ he said.

Is the coronavirus-themed Corona promotion in bad taste?

The outbreak in mainland China is now bigger than the 2003 SARS epidemic, when 5,327 cases of the killer virus were confirmed.

However, it is still behind the total toll of the outbreak, which infected 8,000 people.

‘We want to get the message out that people with low-level symptoms need to come forward,’ she said.

‘We want to detect those cases and it will help us to better understand the disease.’

Dr Chant on Wednesday afternoon confirmed 16 possible coronavirus cases were being investigated in NSW, including a two-year-old child.

Two people confirmed to be infected in NSW have improved significantly and could soon be released from hospital isolation, Dr Chant added.

There have been more than 40 people tested for the infection in NSW.

There are now seven confirmed cases of the virus in Australia, including four in NSW, two in Victoria and one in Queensland.

Australians trapped in the Chinese city of Wuhan due to the viral outbreak will be evacuated to Christmas Island.

Coronavirus in Australia: The facts and figures

Five people have the virus after returning from China’s Hubei province, where coronavirus first surfaced in December. All are being treated in hospital and in a stable condition.

About 400 Australian citizens have registered for evacuation from the city of Wuhan in Hubei.

At this stage, health authorities do not believe people can pass on coronavirus unless they are showing symptoms, but the virus does have a relatively long incubation period of two weeks.

* Federal advice to school students who have returned to Australia from China is that if they are healthy, it is reasonable for them to attend school. If they have been in contact with somebody with coronavirus, they should not attend school for up to 14 days.

* But some Australian private schools have told students who have recently visited China to stay at home for a fortnight. Brisbane’s Stuartholme School for girls will keep 10 of its boarders in quarantine for two weeks after they arrived from China this week.

* Four confirmed cases are being treated at Westmead Hospital: a 21-year-old University of NSW student who was diagnosed after flying back from the virus epicentre in Wuhan, and three men aged 35, 43 and 53.

* Six potential cases are being assessed.

* One confirmed case, a man in his 50s, is being treated at Monash Medical Centre while four of his family are under home isolation.

A sixth case was confirmed on Wednesday.

* Thirteen people have been tested, but authorities do not believe they are likely to have the virus.

* One person tested and cleared.

* A women in her 20s who recently travelled to China is being tested for coronavirus in Launceston after becoming unwell.

* A man was discharged from hospital on Sunday after testing negative.

* Some 132 people have died from the virus in China

* In Thailand, which the worst affected country outside of China, the death toll is currently 14.

* The infection has also spread to most of Australia’s regional neighbours including Singapore, Malaysia, Taiwan, Japan, Vietnam and Cambodia.

* The Australian government has told its citizens to reconsider travel to China and to avoid Hubei province where the virus first appeared in December.

* There are no travel warnings yet for other destinations in the Asian region.

* Global health authorities are on alert for cases of human-to-human transmission of the virus outside China, which could speed up infection rates.

* So far this has occurred in Germany, Japan, Taiwan and Vietnam.

* Higher rates of human-to-human transmission is a reflection of the adaptability of the virus, which was is believed to have initially been transmitted to humans by animals.