Obama’s call to arms for Democrats rang out as a clear battle cry against President Donald Trump, who has complained mail-in voting will cause massive voter fraud – despite the low levels of voter fraud in the U.S. – and suggested delaying the November election.

‘Everybody’s got to come out and vote,’ Obama told mourners at Lewis’ funeral in Georgia.

Obama did not mention Trump by name but it was clear who he was referring to as railed against the oppression of voting rights. 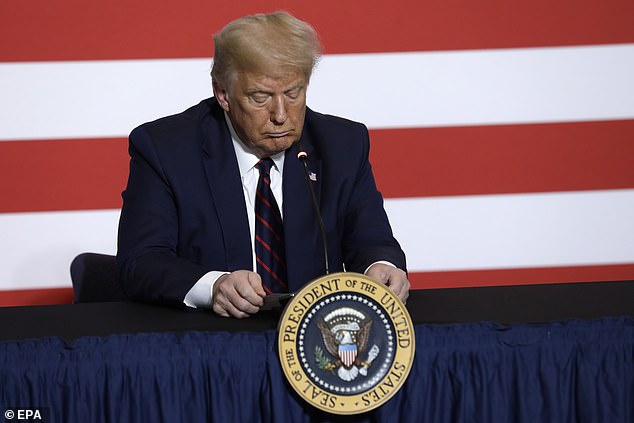 He said the November election, which pits his Vice President Joe Biden against Trump’s bid for a second term, is one of the most ‘urgent’ to take place.

‘Few elections have been as urgent on so many levels as this one. We can’t treat voting as an errand to run if we have some time. We have to treat it as the most important action we can take. On behalf of democracy. Like John, we have to give it all we have,’ Obama said. 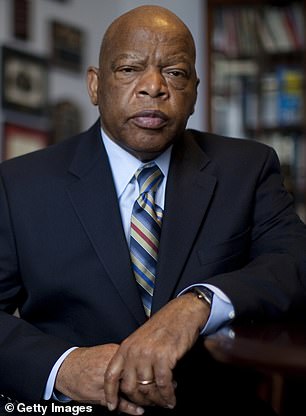 Lewis died on July 17 at age 80 after a battle with pancreatic cancer. His funeral on Thursday caps a week of services and tributes to the civil rights icon

He outlined a bold, progressive plan to improve voting rights throughout the United States and attacked ‘those in power who are doing their darndest to discourage people from voting by closing polling locations and targeting minorities and students with restrictive I.D. Laws and attacking our voting rights with surgical precision, even undermining the postal service in the run-up to an election. That’s going to be dependent on mail in ballots so people don’t get sick.’

His words were seen as an attack on President Trump and the Republican Party, which is trying to limit mail-in voting – an option many states are taking to help combat the spread of the coronavirus.

Obama had a laundry list of specific initiatives that he outlined in his 40-minute eulogy, which earned numerous rounds of applause and standing ovations.

Speaking at the same lectern once used by the Rev. Dr. Martin Luther King, Obama called for an end to the filibuster in the Senate, referring to a as a ‘another Jim crow relic.’ The filibuster is a legislative tactic to block legislation from being passed and has been used by Republicans to kill civil-rights initiatives that have passed the House, such as bills on police reform and voting.

He called on Congress to pass the John Lewis Voting Rights Acting,  noting it was a great way to honor the late congressman and civil rights icon.

‘You want to honor John? Lets honor him by revitalizing the law that he was willing to die for. And by the way, naming it the John Lewis Voting Rights Act, that is a fine tribute but John wouldn’t want us to stop their, just trying to get back to where we already were,’ he said. 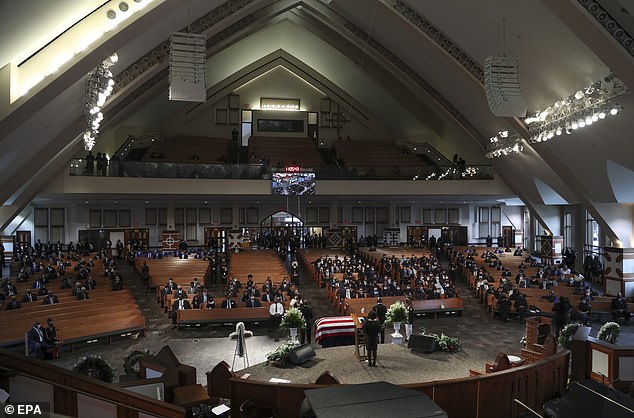 John Lewis’ funeral took place  at the church that was once led by the Rev. Martin Luther King Jr. 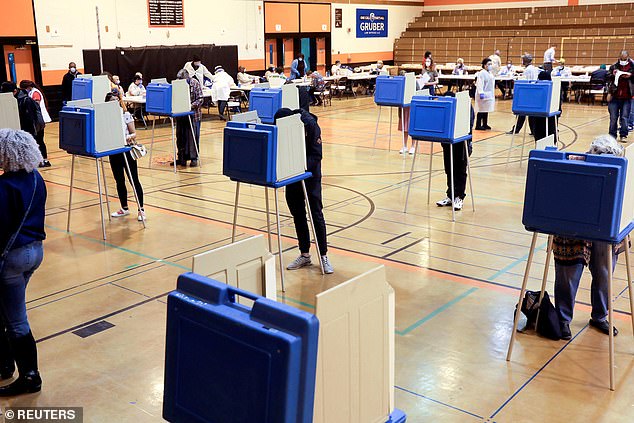 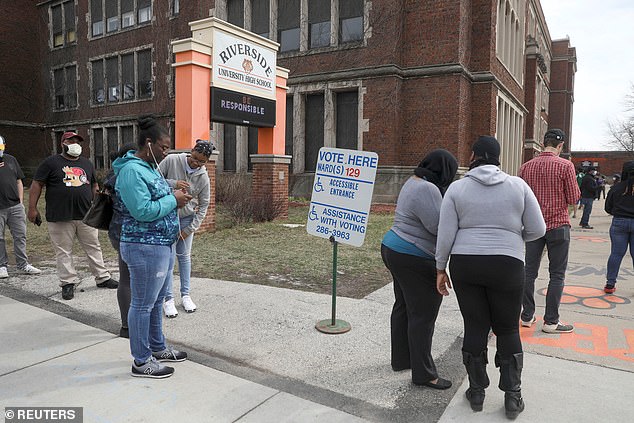 President Obama, in his eulogy, praised John Lewis’ fight for voting rights and railed against those who oppressed minority rights

House Democrats passed the legislation – which restores a key provision to the Voting Act – in December. Senate Republicans have blocked it from being brought up in that chamber.

Lewis was one of the civil rights leaders who was beaten by police as he advocating for equal voting rights. The law that now bears his name would return a provision gutted by a 2013 Supreme Court ruling that struck down the section allowing the federal government to regulate the creation of new election laws in states with a history of discrimination.

Since 2010, at least 25 states have rolled out laws that introduce new restrictions on voting through measures like ID requirements and registration restrictions, according to the Brennan Center.

The former president appeared to be holding back tears at different points during his eulogy, particularly when he talked about Lewis’ fight for voting rights and how that paved the way for his eventual election as president.

Obama said all Americans should be automatically registered to vote, former felons should be able to vote, and called for Election Day to be made a national holiday, a stark contrast to Trump’s call earlier Thursday to delay the November election.

‘Once we’ve passed the John Lewis voting rights act, we should keep marching to make it even better: by making sure every American is automatically registered to vote, including former inmates who have earned their second chance. By adding polling places and expanding early voting and making Election Day a national holiday so if you are somebody who is working in a factory or you’re a single mom who is to go to her job and doesn’t get time off, you can still cast your ballot,’ he said.

The former president went on to say all Americans should be have equal representation in government, specifically pointing out Washington D.C. and Puerto Rico, who have delegates to Congress without any power to vote.

Obama said that every American citizen should have ‘equal representation in our government, including the American citizens who live in Washington, D.C., and in Puerto Rico. They are Americans. By ending some of the partisan gerrymandering so that all voters have the power to choose their politicians, not the other way around,’ he said. 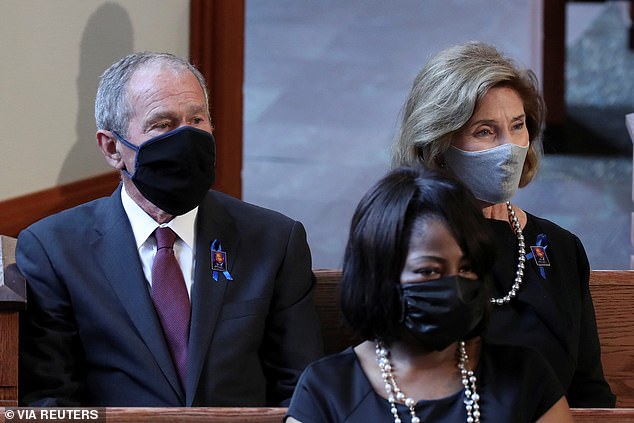 Former President George W. Bush and First Lady Laura Bush were among the mourners at the funeral service on Thursday 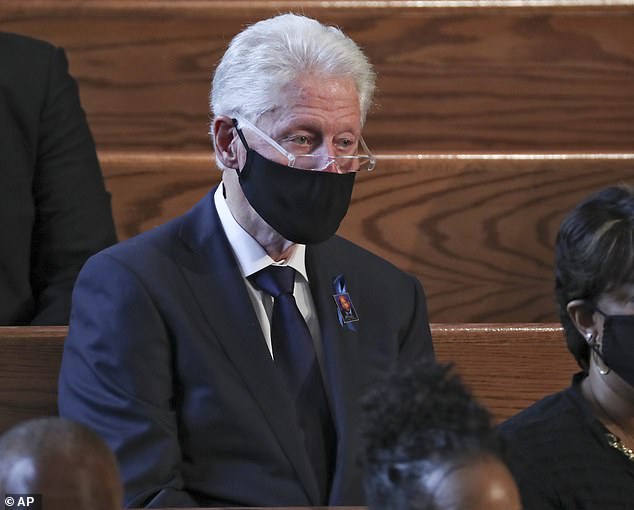 Former President Bill Clinton clapped along with other mourners as they celebrated Lewis’ life on Thursday. His wife Hillary Clinton was absent from the funeral

The former president and his attorney general, Eric Holder, started a Democratic group to combat gerrymandering, which is when House districts are redrawn to favor one political party or another. House districts will be reconfigured after the 2020 census.

Lewis’ private funeral began at 11 a.m. at the church that was once led by the Rev. Martin Luther King Jr.

His funeral follows a week of memorial services. The coffin bearing his body was escorted across the Edmund Pettus Bridge in Selma on Sunday, decades after his ‘Bloody Sunday’ beating there drew a national spotlight to the struggle for racial equality.  On Monday, his casket was taken to the U.S. Capitol in Washington where it lay in state through Tuesday.

He spent more than three decades in Congress and his district included most of Atlanta.

In addition to Obama, Lewis was eulogized by former Presidents George W. Bush and Bill Clinton. Jimmy Carter sent a message to be read.

It was noted repeatedly through the service that Lewis was being honored by three former presidents – a subtle way of pointing out President Trump was not there.

Trump also did not travel to Capitol Hill this week to pay his respects when Lewis was lying in state in the Capitol Rotunda.  He and Lewis did not get along with the congressman, before he died, criticizing Trump’s handling of race relations after demonstrations sprung up in the wake of George Floyd’s death.