Former U.S. President Barack Obama was treated to a traditional Maori welcoming ceremony during the second day of his whirlwindNew Zealand trip on Thursday.

Obama arrived in the country on Wednesday and took a helicopter straight to the Northland where he played golf with former Prime Minister Sir John Key at Kauri Cliffs, a golf course owned by American investor Julian Robertson.

The following morning, Obama played yet another round of golf at an even more exclusive course, Tara Iti, ranked the 29th best course in the world by GOLF magazine.

Obama then returned to Auckland where he was treated to a traditional Maori welcoming ceremony, called a powhiri, outside Government House.

President Obama was treated to a powhiri, a traditional Maori welcoming ceremony, in New Zealand on Thursday 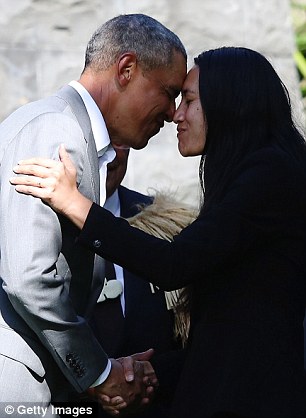 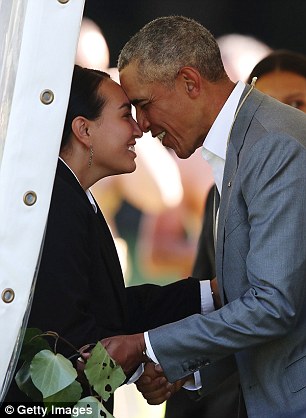 At the end of the ceremony, Obama greeted several members of the tribe, performing a hongi greeting where you touch foreheads and noses 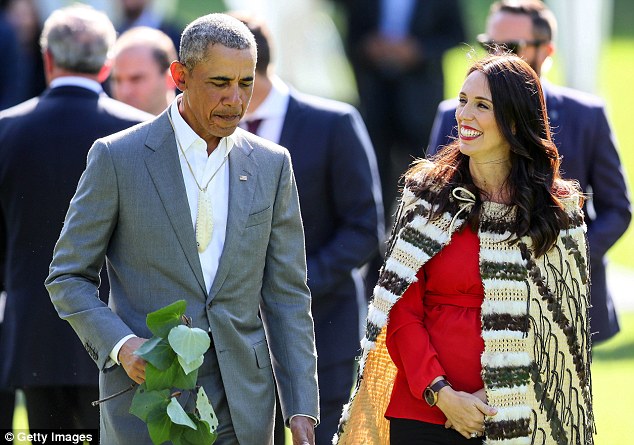 Obama was gifted a whale tooth pendant, which is usually given to talented orators. He wore it over his suit. He’s seen above with Prime Minister Jacinda Ardern, who wore a traditional korowai over her shoulders

During the ceremony, which was presided over by the Ngāti Whātua o Ōrākei tribe, Obama was gifted two whale tooth pendants – one for him and one for his wife, who didn’t accompany him for the trip.

Obama wore the gift, which is usually given to gifted orators, over his suit.

At the end of the ceremony, he and members of the tribe engaged in a hongi, a greeting where they touched foreheads and noses. 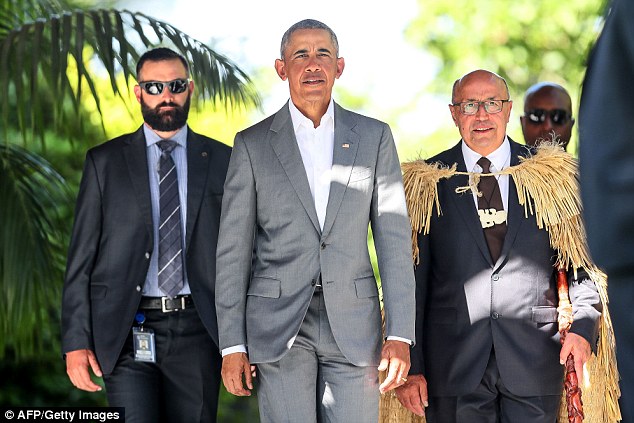 Obama wore a great suit, a white button-down shirt and black dress shoes for the occasion – foregoing a tie 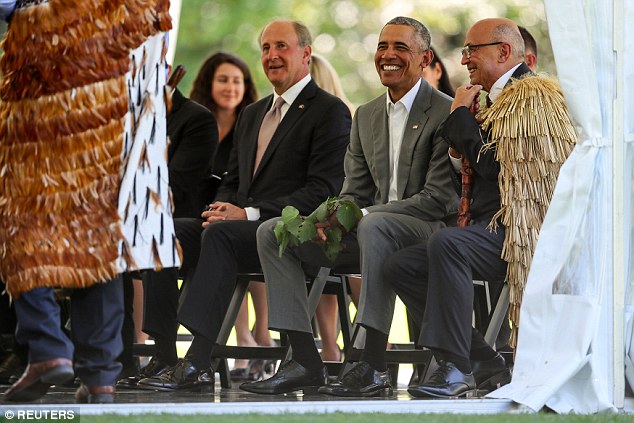 Obama is on a three-day trip to the country. After a morning meeting with Maori women leaders, he’ll fly to Australia 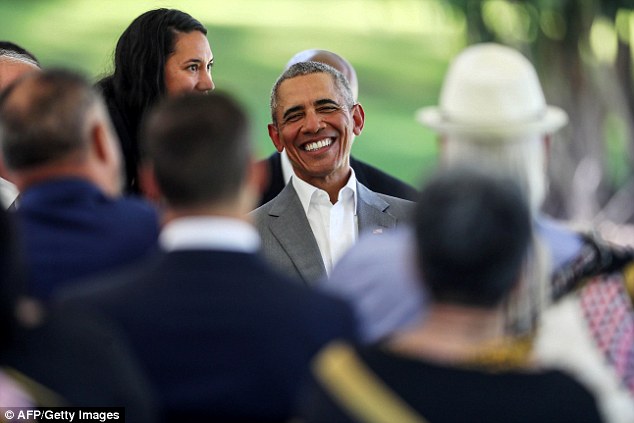 Obama seemed to be enjoying himself during the powhiri on Thursday 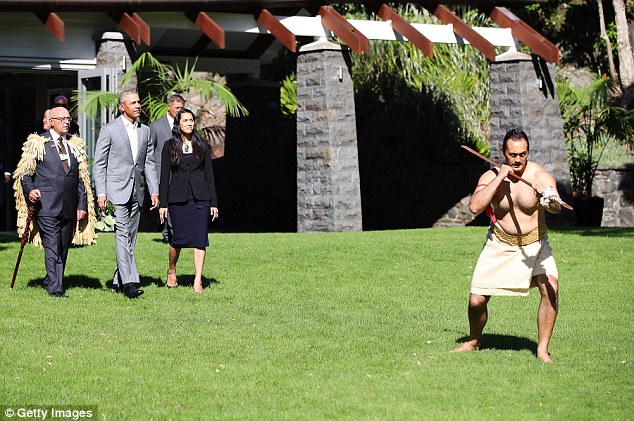 At one point during the ceremony, Maori warriors danced and showed off their skills 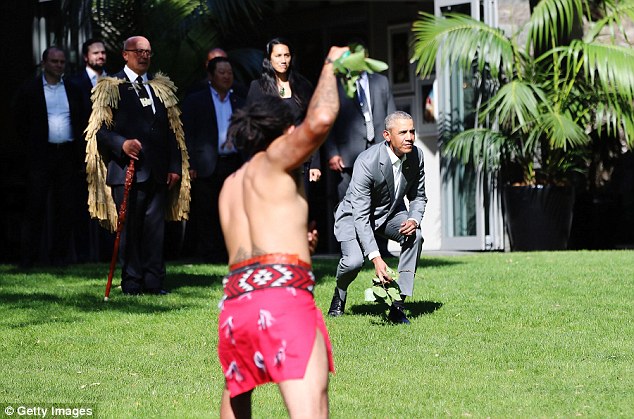 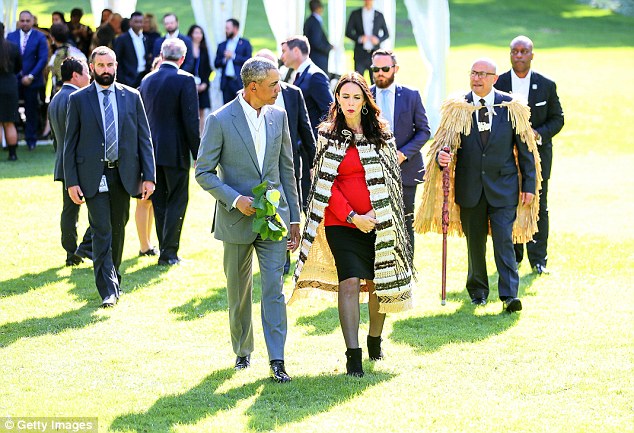 The main reason for Obama’s trip to New Zealand was a speech Thursday night which he was paid $290,000 for

After the meeting, Ardern reporters told reporters that the 44th American president imparted some parenting advice to her, since she is expecting her first child in June.

‘I asked him about parenthood and he had tips that I will probably long remember,’ Ardern said.

One thing she says she asked Obama was how to deal with the guilt of continuing to work while her child is growing up (Ardern plans to take six weeks off after giving birth, making her the first leader of a country to do so).

‘Because I have no doubt I’m going to experience some of that in the future as i juggle the roles that I have,’ she said, adding: ‘I’m sure his insights would be the same as what any parent would have.’

She says they also spoke about the future of progressive politics and the best ways to keep young people engaged. 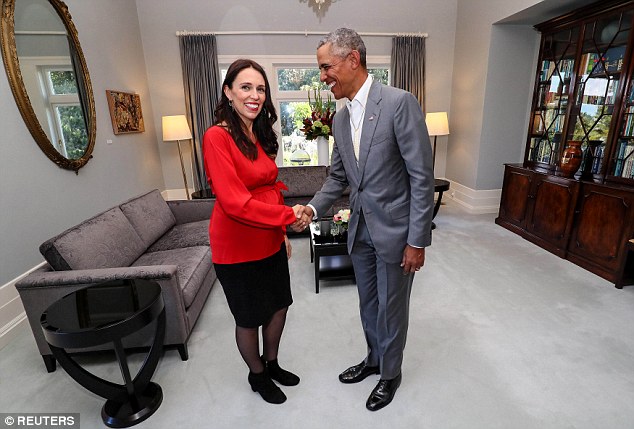 After the welcoming ceremony, Obama met with Ardern at Government House for a closed door meeting 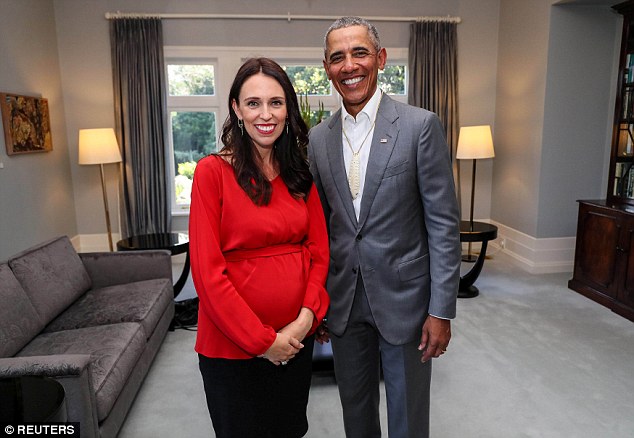 During the meeting, Ardern, who is expecting her first child in June, asked Obama for some parenting advice

‘We talked about pressing issues like climate change and a little about our agenda here in New Zealand,’ she added.

‘It was a conversation I feel extremely lucky to have had,’ Ardern said.

The focal point of Obama’s trip was a talk he gave later that evening at a gala in Auckland, for which he was paid a reported $290,000.

The event, which was invite only, took place in front of a crowed of about 1,000 and was sponsored by the Westpac bank. The event was organized by the New Zealand United States Council.

Neill joked that he bought a tie for the event, only to learn that he wouldn’t need to wear one because Obama planned to dress casually – wearing a simple-yet-smart grey suit, white button down and black dress shoes, the NZ Herald reported. 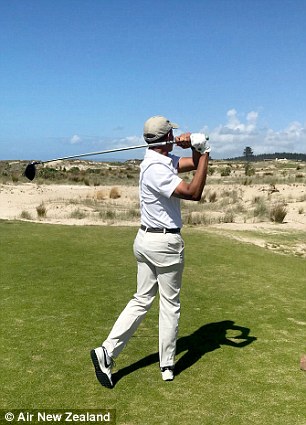 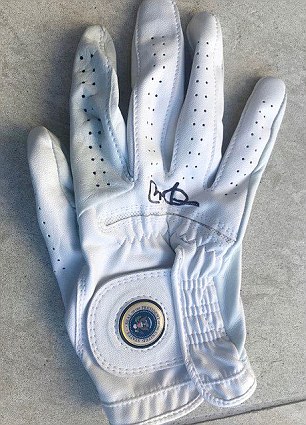 Since leaving office, Obama says he avoids wearing ties unless he’s going to a wedding, funeral or meeting the Queen of England – who he says he ‘loves’.

Obama said one of the best parts of private life is the reduced security and being able to take his two dogs – Bo and Sunny – for a walk alone.

While he avoided talking about current President Trump, or Russia, he did weigh in on current issues, including China’s emerging place in the world.

He said that China, and especially President Xi Jinping, is becoming more comfortable with its status as a superpower, but that they have a lot of work to do, especially concerning disputes in the South China Sea, where China has been claiming new territory by building artificial islands.

He also spoke about the 2011 mission her oversaw, which ended ended in the killing of Al Qaeda leader Osama bin Laden.

He said that in the lead up to the raid, he was told there was a 45-55 per cent chance that the man living in the compound was Bin Laden, and not, say, a Pakistani general.

‘Once you are in the situation, you have to take the lead,’ he said.

He said he truly believed that if every country regularly elected female leaders, issues like war, conflict and child poverty would be addressed.

Obama ended his speech with a quote from Martin Luther King Jr.: ‘The arc of the moral universe is long, but it bends toward justice.’

Obama will end his trip on Friday with a smaller meeting with about 20 Maori women leaders.

He will then fly to Australia on Friday for a quick visit, before spending the weekend in Japan.