Fresno State university is investigating comments made on Twitter by an English professor who called former first lady Barbara Bush an ‘amazing racist’ shortly after her death Tuesday at age 92.

‘Barbara Bush was a generous and smart and amazing racist who, along with her husband, raised a war criminal,’ Randa Jarrar wrote on Twitter.

The comment sparked widespread outrage across America, which Jarra stoked while defending herself. In one tweet, she told her critics: ‘I work as a tenured professor. I make 100K a year doing that. I will never be fired. I will always have people wanting to hear what I have to say.’

However her social media accounts have since been made private and Fresnoe State University President Joseph Castro called Jarrar’s comments disrespectful and said they went beyond free speech, the newspaper reported.

‘A professor with tenure does not have blanket protection to say and do what they wish,’ Castro said. ‘We are all held accountable for our actions.’

Jarrar, who is on leave this semester, describes herself in her Twitter messages as an Arab-American and a Muslim-American woman.

Abre Conner, a staff attorney for ACLU Northern California, said Jarrar’s statements fall under her First Amendment rights to express a political opinion on her own time. 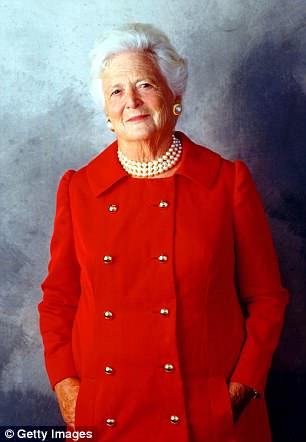 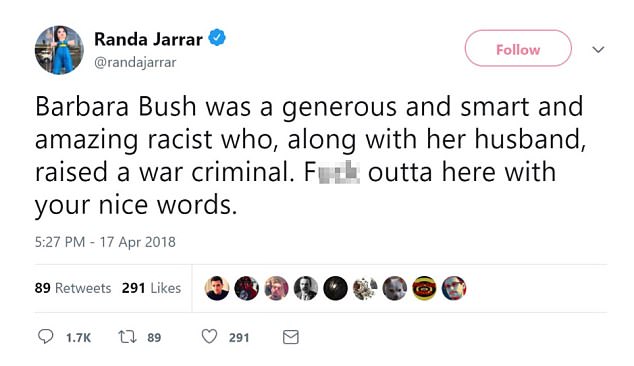 Jarrar wrote that the former first lady was an ‘amazing racist who, along with her husband, raised a war criminal’ 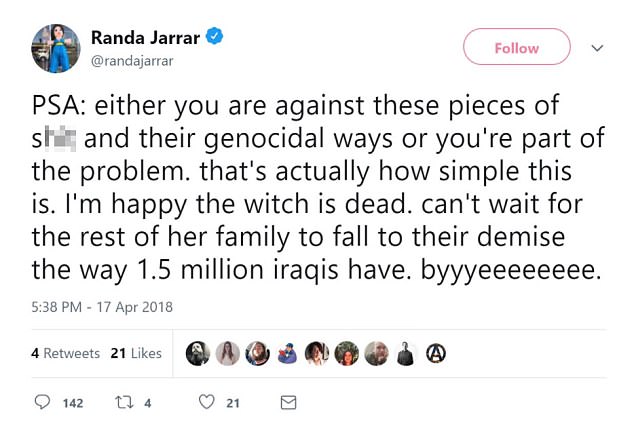 She added: ‘Either you are against these pieces of s*** and their genocidal ways or you’re part of the problem….I’m happy the witch is dead’

‘If Fresno State administrators are reviewing her based on this political speech, that is troubling,’ he said.

Jarrar was scheduled to appear at an event titled LitHop this weekend, but the event’s organizers and Fresno City College said she told them she will not participate.

‘PSA: either you are against these pieces of s*** and their genocidal ways or you’re part of the problem,’ Jarrar added in her viral rant.

‘That’s actually how simple this is. I’m happy the witch is dead. Can’t wait for the rest of her family to fall to their demise the way 1.5 million Iraqis have.’

The tweets generated controversy online, with many saying that her words against Bush were inappropriate.

‘Randa Jarrar is a hate-spewing psychopath, yet she remains gainfully employed at Fresno State. This CANNOT be allowed to stand,’ one user wrote. 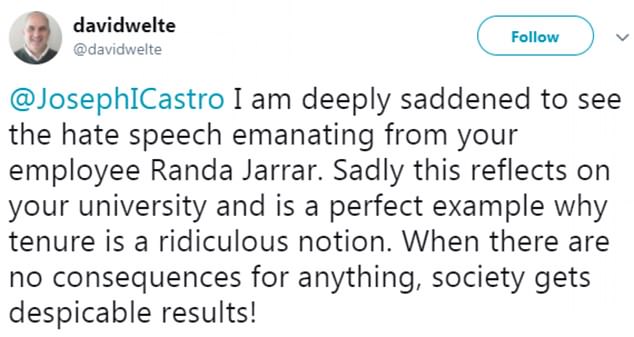 Many called Jarrar out on Twitter, but she only continued to deride Bush

Another user added: ‘If you’re a student in one of Randa Jarrar’s classes please do the right thing and boycott her until she is forced to resign. Who would want to learn English when she spews this vile crap?’

But that only fueled Jarrar’s rhetoric, and she continued to voice her opinion in several more tweets before eventually setting her account to private.

In one tweet, she said she couldn’t be fired because she has tenure, going so far as to tag the school’s president in the post.

The school has tried to distance itself from Jarrar, saying that her tweets were written as a ‘private citizen’ and they don’t reflect the university.

‘Professor Jarrar’s expressed personal views and commentary are obviously contrary to the core values of our University, which include respect and empathy for individuals with divergent points of view, and a sincere commitment to mutual understanding and progress,’ he added.

‘On behalf of Fresno State, I extend my deepest condolences to the Bush family on the loss of our former First Lady, Barbara Bush.

‘We share the deep concerns expressed by others over the personal comments made today by Professor Randa Jarrar, a professor in the English Department at Fresno State. He statements were made as a private citizen, not as a representative of Fresno State.

‘Professor Jarrar’s expressed personal views and commentary are obviously contrary to the core values of our University, which include respect and empathy for individuals with divergent points of view, and a sincere commitment to mutual understanding and progrress.’ the school’s president, Joseph I. Casto, said in a statement.

Jarrar, a Muslim, was born in Chicago but grew up in Kuwait and Egypt, before returning to the U.S. after the first Gulf War.

Her writing has appeared in The New York Times Magazine, Salon.com, The Rumpus, the Utne Reader, The Oxford American.

She is the author of two books, the coming of age novel ‘A Map of Home’ and a story collection – ‘Him, Me, Muhammad Ali’.