BARBARA DAVIES: Can John Leslie EVER shake off the seedy image that has haunted him for 20 years

A strong whiff of deja vu swirled around John Leslie’s triumphant appearance on the steps of Southwark Crown Court yesterday, moments after he was cleared of sexual assault.

It was on the exact same spot, 17 years ago, that the former Blue Peter and This Morning presenter stood after a previous indecent assault case against him was dropped.

On that occasion, in July 2003, Leslie stood arm in arm with his then girlfriend, former nurse Abi Titmuss, after being told he could leave the court ‘without a stain on his character’.

Yet the bitter truth is that, having been the target of several unproven sexual assault claims since he was erroneously named as Ulrika Jonsson’s alleged rapist in 2002, 55-year-old Leslie has never managed to repair the damage done to his once glittering television career.

This latest trial is, in fact, the third time he’s been hauled in front of the courts following accusations of sexual or indecent assault – alleged to have taken place mostly in nightclubs or at parties – from other women.

As well as appearing in court in London in 2003 and in Edinburgh in 2018, he has also been investigated by police in relation to several ‘sexual allegations’.

But over the past 18 years, Leslie has always been adamant that he is the victim – the innocent target of malicious lies and a swathe of dishonest women drawn to his celebrity like moths to a flame. 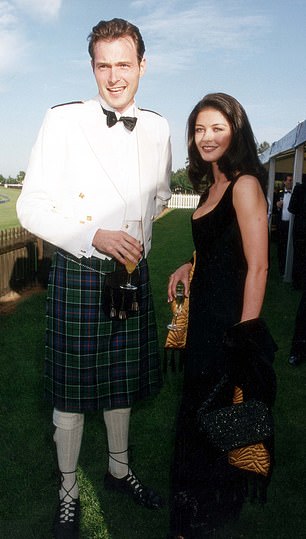 John Leslie is pictured above in 1993 with Catherine Zeta Jones

Friends in Scotland, where Leslie has been living near his parents and brother and working as a property developer and a part-time DJ for the past decade, told the Mail this week that the former star ‘wasn’t in a good way’ over the latest historic claim that he grabbed a woman’s breasts moments after walking into a Soho nightclub in December 2008.

They say he remains deeply bitter about the way his life has been impacted by the unproven allegations against him. He believes he has been unfairly singled out – persecuted because of who he is.

‘He’s taken this case particularly badly and it has hit him hard,’ said one of them.

Leslie’s rapid fall from grace began suddenly in October 2002, when television presenter Miss Jonsson wrote in her autobiography that she had been raped when she was a 19-year-old TV-am weather girl.

Leslie was accidentally named, live on air, as the man in question by presenter Matthew Wright.

Miss Jonsson refused to confirm or deny that it was him and has never revealed the identity of her attacker.

But the huge publicity that the case attracted brought further complaints of ‘improper sexual conduct’ from other women, including one who alleged he had pinned her against a wall in a bathroom at London’s Sanderson Hotel and indecently assaulted her.

Another said he had taken cocaine and pestered her to join in both group and lesbian sex sessions. And another claimed she had met him a nightclub where he had groped her and exposed himself. Yet another said that he had cornered her in a changing hut and molested her – all denied by Leslie.

‘I turned and pushed him off,’ she said. ‘But he just looked at me and walked out as if nothing had happened.’

Leslie was charged the following year [2003] with two counts of indecently assaulting a 23-year-old actress from the North East in 1997. He walked free from Southwark Crown Court after prosecutors dropped the case. 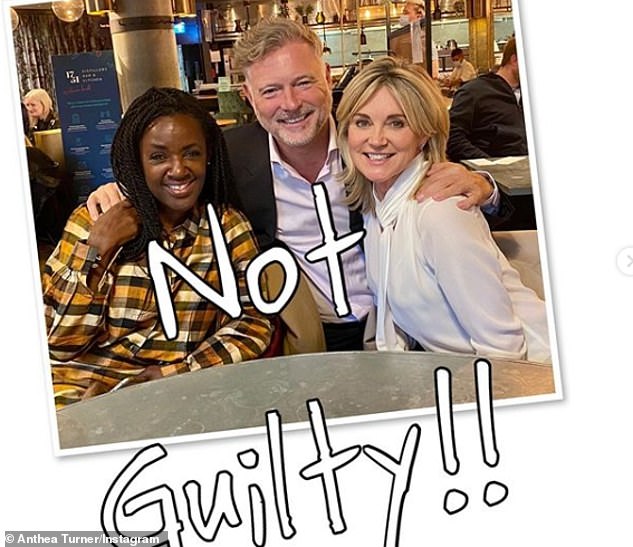 Over the past 18 years, Leslie has always been adamant that he is the victim – the innocent target of malicious lies and a swathe of dishonest women drawn to his celebrity like moths to a flame. Anthea Turner shared her relief that John Leslie was cleared

But despite the ‘no stain on your character’ assurance he was given, it was clear that TV executives didn’t feel the same about the former golden boy of British daytime television. He was replaced by Phillip Schofield, who took up his place on the This Morning sofa next to Fern Britton.

Yet while Leslie bitterly bemoaned his fate to anyone who would listen, some of the damage may be viewed as self-inflicted.

These were the events that made him too toxic for daytime television – even though he later told an interviewer that he was only a ‘party boy’ and that his house was a ‘party house’.

Leslie later claimed that he had ‘had to sell absolutely everything’ to avoid bankruptcy and to avoid going on reality television shows and that he had gone from ‘earning over £300,000 to not a single penny coming in’.

Further scandal followed in 2008 when Leslie faced fresh accusations of rape. This time, his accuser claimed that she was attacked in 1995 when she was in her early 20s. The case never reached court.

At around the same time, in August 2008, his once clean-cut image took yet another hammering when one of his ex-girlfriends, Rachel Bentley, revealed that he had turned her back on both her and their then two-year-old daughter Isabelle, accusing him of being a ‘hypocrite’ and whitewashing them out of his history.

Arrested over rape and assault allegation from 1995. Does not go to court

Accused of sex assault at radio awards. Not charged

Accused of attack at club but acquitted the next year

By then Leslie had decamped to his native Scotland. But in November 2015, after attending a radio awards ceremony in Edinburgh, he was accused of sexually assaulting a 22-year-old woman and interviewed by police.

Detectives were later seen leaving his home carrying evidence bags. Three months later, Leslie was informed that he would not be charged.

He wrote about the incident at length on his Facebook page in 2017, saying he had been ‘dragged out of my bed by police officers’, handcuffed and detained for ten hours at a police station.

While he was held, he claimed, police searched his house and removed items of bedding and clothing, adding ‘this was very upsetting for me, and even worse for my elderly parents’. He said he was ‘glad to be cleared’, but added: ‘I have served a hefty punishment for a crime that never was’.

But then, two years ago, Leslie was accused of putting his hand down the back of a bride-to-be’s trousers during her hen night at an Edinburgh nightclub in June 2017. He was acquitted after a two-day trial at Edinburgh Sheriff Court but, as a result, lost his part-time work as a radio and club DJ.

It took the jury of nine men and three women at Southwark Crown Court just 23 minutes yesterday to decide that Leslie, once again, was not guilty of sexually assault. His barrister had, barely an hour earlier, told them that at the time of the alleged incident: ‘His career was finished. He hadn’t worked in five years, he was disgraced. He was – I hope you will forgive me for saying this – a bit of an embarrassment.’ On hearing the not guilty verdict, Leslie collapsed and cried while his elderly father Les, who had accompanied him to court throughout the four-day trial, punched the air and fell down crying with his head in his hands.

Whether or not Leslie will ever be able to put the past behind him remains to be seen. In the past, he has spoken of the emotional scars left behind. In 2013, he told presenter Lorraine Kelly: ‘It was like a runaway train. It got to the point where the only way to stop it was contemplating suicide.

But there are signs that he is looking to the future. Just two months ago, in September, he sold his three-bedroom bungalow in Edinburgh for £720,000.

He has been trying to reinvent himself as a songwriter – a move that harks back to his early days when he worked as a piano teacher.

Leslie’s life today is certainly a world away from his glory days when he was earning £350,000 a year as one of the nation’s favourite TV personalities and living in a palatial home – now worth £5.7million – near Richmond Park.

If anyone needed a reminder of the professional esteem with which he was once held, former colleagues turned out this week to speak up for him in court.

Former Blue Peter presenter Yvette Fielding, now better known from the TV series Most Haunted, described Leslie as a ‘lovely, lovely person’ and ‘considered him to be a brother’.

She recalled how, while working together, she and Leslie had shared a hut in the middle of the African bush for ten days. 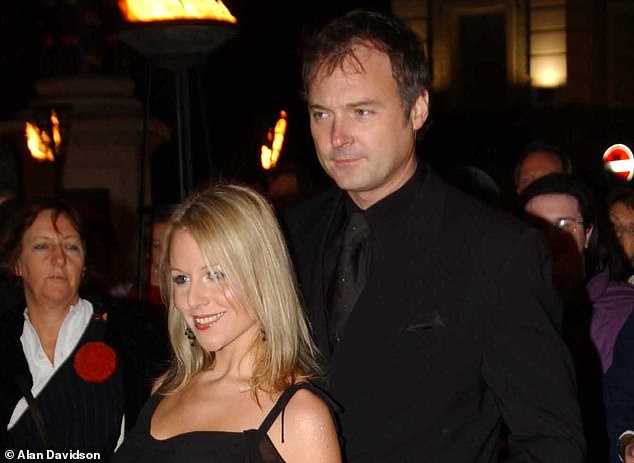 It was on the exact same spot, 17 years ago, that the former Blue Peter and This Morning presenter stood after a previous indecent assault case against him was dropped. On that occasion, in July 2003, Leslie stood arm in arm with his then girlfriend, former nurse Abi Titmuss, after being told he could leave the court ‘without a stain on his character’. The pair are pictured together above

‘John was incredibly gentlemanly. He would turn away every time I had to change,’ she said from the witness stand. ‘He averted his eyes when I had to go to the lavatory.’

Finally, there was a statement from Fern Britton, Leslie’s co-host from the 1990s, who told the jury she was ‘confident the allegation made does not fit with the man that I know in the slightest’.

Clearly the jury at Southwark Crown Court agreed with her.

Some might argue that Leslie has been cursed with monumental bad luck over the past 18 years.

But given that he has been declared innocent – and clearly held in high regard by his female former co-stars – the real question is whether he will finally be able to shake off the seedy, sex-pest image that has haunted him for nearly two decades and put right the wrongs of the past.