Dramatic footage has emerged of the moment Spanish police raided the homes of four men suspected of carrying out the Barcelona terror attack.

Heavily armed officers from the Mossos d’Esquadra police force can be seen breaking into apartments in the town of Ripoll on Thursday, where most of the alleged terror plotters lived.

Police filmed as they searched the properties, before uncovering a gas canister of the same kind found at a suspected bomb factory used by the group in Alcanar.

Police in Catalonia filmed as they raided homes in the town of Ripoll last week, where the majority of the Barcelona terror suspects lived 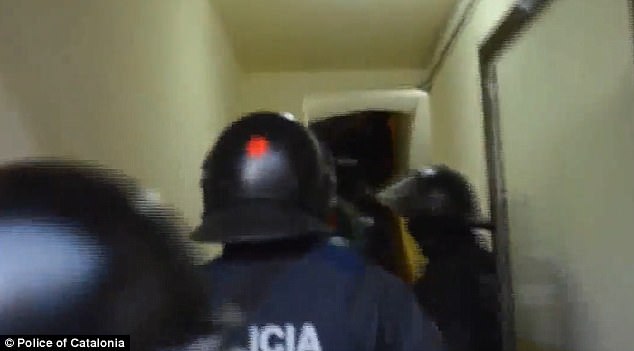 Officers can be seen storming into apartments wearing full riot gear before searching them for clues. Police say the raids happened on Thursday

Mohammed Aallaa, whose car was used in the Cambrils attack,  Driss Oukabir, who rented the van used in the Barcelona attack, and Sahal El Karib, who owns an internet cafe in the town, were all arrested as a result of the raids.

A fourth man, Mohammed Houli Chemlal, was pulled from the ruins of the suspected bomb factory before being arrested.

All four men appeared in court on Tuesday, where Chemlal and Oukabir were ordered to be held without bail and charged with terror-related murder.

Police were given 72 hours to strengthen their case against Karib as officers carried out a fresh raid on his cafe.

But Aallaa was released on bail after a judge ruled there was not enough evidence to hold or charge him. 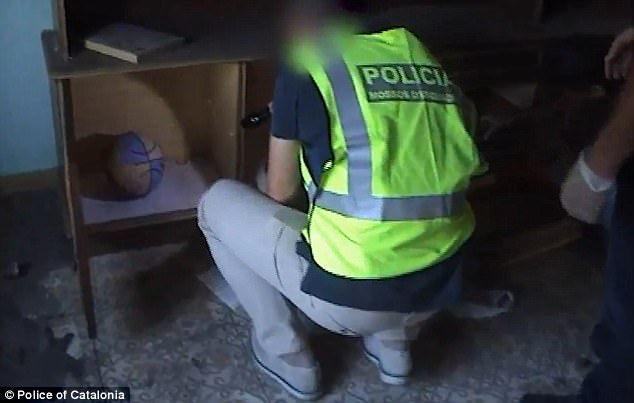 Driss Oukabir and Mohammed Houli Chemlal have been charged over the attacks while Sahal El Karib has been detained for questioning. Mohammed Aallaa has been freed on bail

However he has been forced to hand over his passport, barred from leaving the country, and must report to a court every Monday.

The men are accused of being part of a terror cell which killed 15 people and wounded more than 120 during linked attacks on Las Ramblas, in Barcelona, and the beach town of Cambrils.

Court documents say the group were plotting a much larger suicide bomb attack targeting the city’s landmarks, but were thwarted when their bomb factory exploded on Wednesday last week.

As well as injuring Chemlal, the blast killed suspected plot mastermind Abdelbaki Es Satty and likely killed Youssef Aallaa, one of the terrorists.

That explosion forced the group to downsize their plans, rushing instead to acquire vehicles and knives to carry out lone-wolf-style attacks like those in Berlin, Nice, Stockholm and London, the judge said.