Witnesses have told of the terror and chaos that gripped central Barcelona after a van ploughed into dozens of bystanders and two armed men entered a restaurant.

At least 13 people are believed to have been killed and several more injured in the incident in the Las Ramblas region.

A chilling video circulating on social media showed at least 19 people lying injured on the pavement, many of whom can be seen bleeding as they are tended to.

Tom Gueller, who lives on an adjoining road, said the van did not slow down as it sped through the heavily packed tourist area.

At least four people are believed to have been killed in the incident in Las Ramblas region of the city, which was packed with tourists 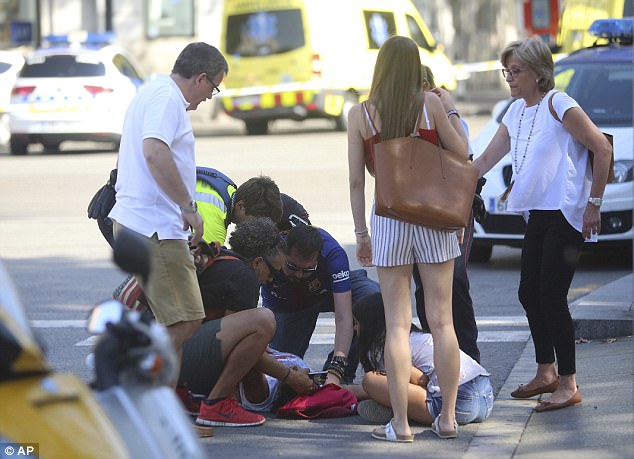 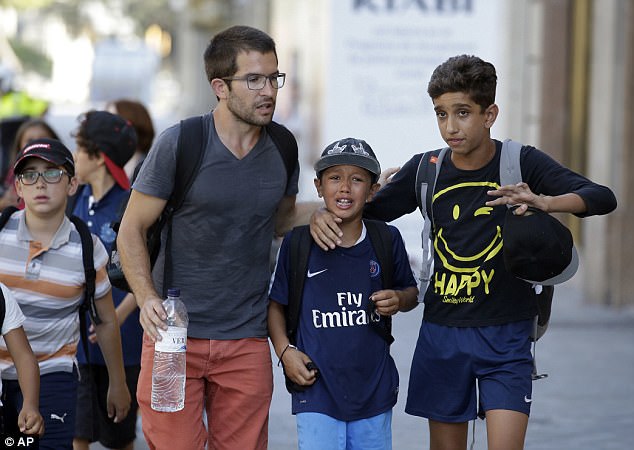 ‘I heard a crashing noise and the whole street just started to run, screaming,’ said Aamer Anwar who was in Las Ramblas at the time

Mr Gueller was forced to flee the scene when he saw the van hurtling through the crowds.

‘I heard screams and a bit of a crash and then I just saw the crowd parting and this van going full pelt down the middle of the Ramblas and I immediately knew that it was a terrorist attack or something like that.’ He told BBC’s PM.

Meanwhile Aamer Anwar, who was walking down the street at the time, told how horrified pedestrians screamed as they fled the scene of the attack.

‘I heard a crashing noise and the whole street just started to run,’ he told Sky News. ‘I saw a woman right next to me screaming for her kids.

He said police officers with guns and batons immediately descended on the scene and started pushing people to safety.

Mr Anwar described scenes of ‘chaos’, saying everyone there went into ‘panic mode’. 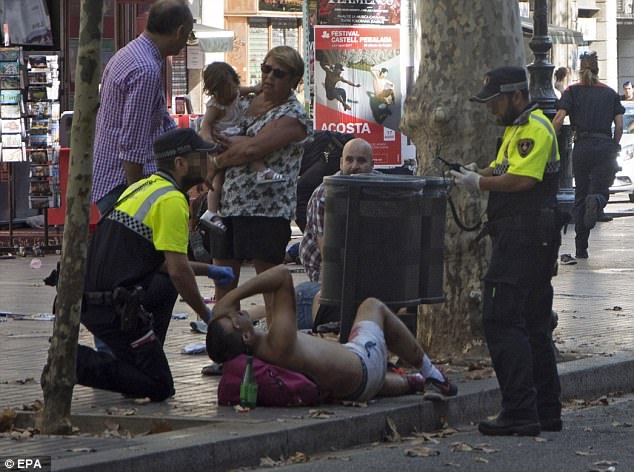 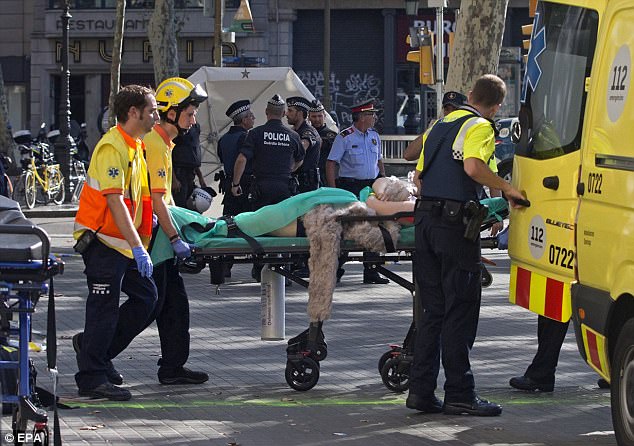 Tom Gueller, who lives on an adjoining road, said the van did not slow down as it sped through the heavily packed tourist area 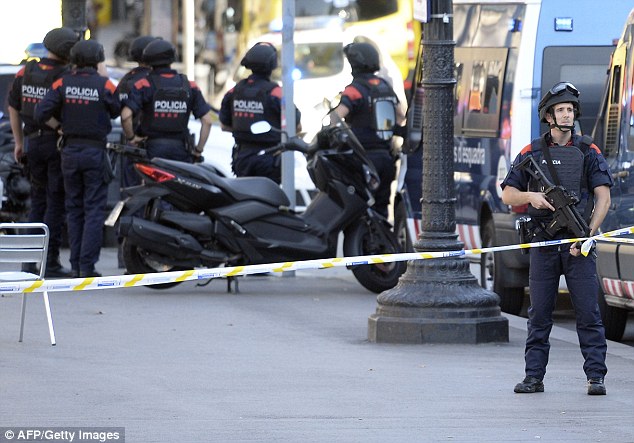 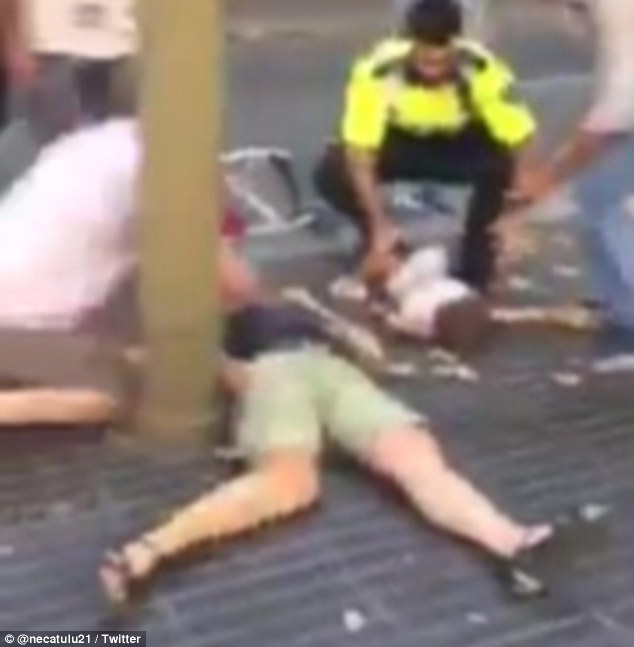 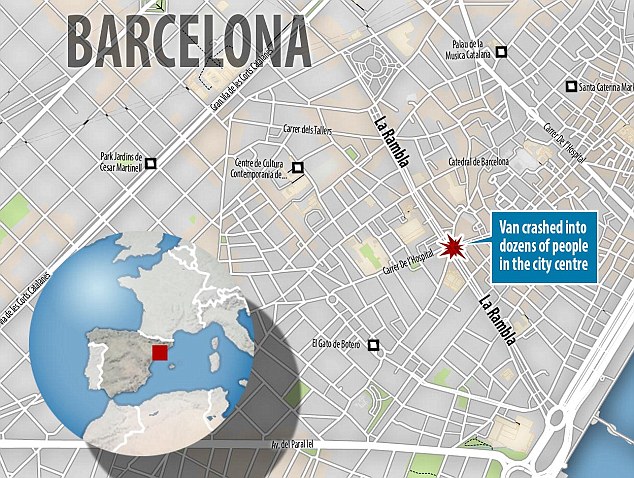 He added: ‘Police officers who got there just started screaming at people to move back, move back.

‘One of the shopkeepers tried to speak to him. He said he saw five or six people seriously injured on the ground, a van had driven into people.

‘Within 30 seconds, police vans, ambulances, police officers with guns, were piling out and we were being sectioned off and then being pushed rapidly back down Ramblas.’

Pictures and video emerging from the scene show dead bodies scattered down the busy tree-lined promenade in the centre of the city.

Gunfire is reported to have been heard at the Corte Ingles store in the area after police announced a ‘massive crash’.

It is believed the van hit pedestrians before gunmen ran into a nearby restaurant to hold diners hostage.

Eyewitnesses reported seeing people running away and screaming after the incident happened. 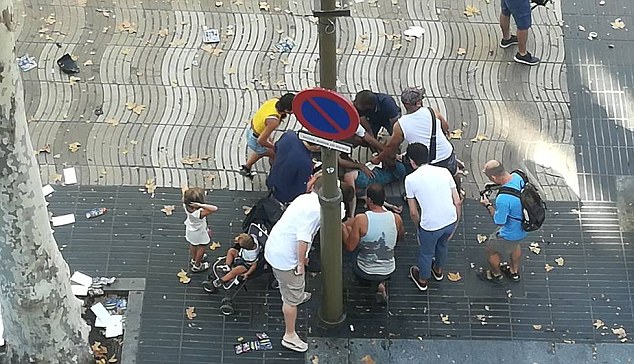 Another witness told Sky News: ‘It was quite terrifying. All of a sudden scores of people ran towards us, hysterical, children hysterical… first of all they said someone had been shot.

‘All of a sudden a second wave of people came down the street, we just ran, I lost my husband in the melee. The shops went into lockdown mode.’

She added: ‘We really had no idea what was going on other than that we needed to get ourselves out of there very quickly… there was just hundreds of people running away very quickly.’