Barcelona: Gerard Pique suffers ANOTHER injury as the defender is forced off with a calf issue

Gerard Pique suffered another injury as he was forced off with a calf issue in the first half of Barcelona’s clash with Athletic Bilbao on Saturday.

The defender lasted just 30 minutes before he was substituted for Ronald Araujo after injuring himself when he went up for a header with Bilbao’s Alex Berenguer.

Barca confirmed after the game that Pique had felt discomfort in his left calf and will undergo tests this week to determine the extent of the injury.

Ronald Koeman said the defender had been suffering from ‘minor annoyances’ in his pre-match press conference but insisted he had trained as normal all week.

Barca came from behind to claim a point against Bilbao, with Memphis Depay’s 75th minute strike cancelling out the opener from Inigo Martinez.

The Catalans had Eric Garcia sent off in the 93rd minute, leaving them even shorter in the centre back department. 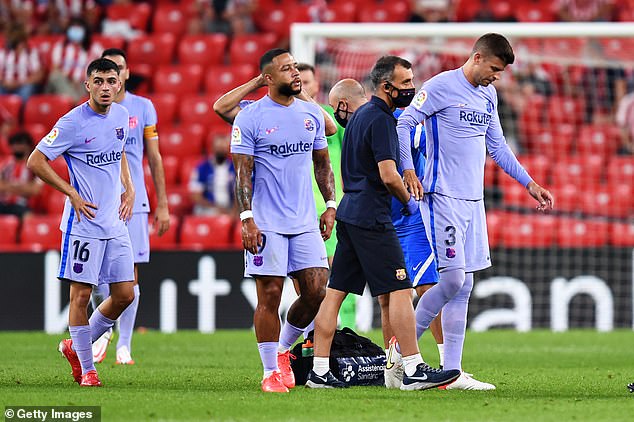 Koeman will be hoping Pique’s injury is not serious with Getafe to come next weekend before a clash with Sevilla after the international break.

Pique missed 18 league games with a knee injury last season with Araujo stepping up in his absence.

He missed four months of football from November to February before making a brief return but was forced back on the sidelines after picking up another knee issue.

The centre back was the first player to accept a significant pay cut in order for Barca to register their new signings this summer. 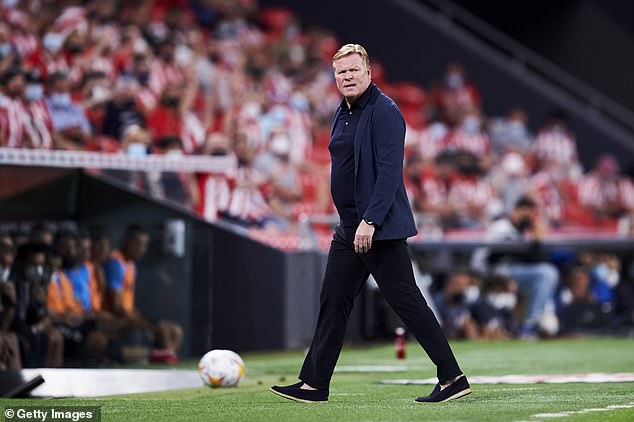 Depay and Garcia reportedly could not have been registered without Pique’s salary reduction.

‘It’s what had to be done,’ the 34-year-old defender said last week.

‘The other captains will do the same soon. Because of a timing issue I had to be the first one so we could register the players. The captains have always intended to make the adjustments needed by the club. We are proud of this decision.’