‘Are you serious?’: Barcelona joke there should be no debate over Lionel Messi winning Champions League Player of the Week after he is pitted against Luis Suarez, Frenkie de Jong and Donny van de Beek for the award

Barcelona have jokingly questioned whether there’s any need to hold a vote for this week’s Champions League Player of the Week poll.

Following the Catalan side’s emphatic 3-0 win over Liverpool and Ajax’s impressive 1-0 away win at Tottenham, the Champions League’s official Twitter page asked its followers who they’d be voting for.

Ajax duo Frenkie de Jong and Donny van de Beek were up for nomination after both played starring roles at the Tottenham Hotspur Stadium on Tuesday, while Luis Suarez and Lionel Messi were the other two nominees.

Van de Beek scored in the first half against Spurs and have left Mauricio Pochettino’s side with a difficult task when they face each other again in Amsterdam next week.

De Jong, who will join Barcelona at the end of the season, also orchestrated things for Ajax to put Spurs under real pressure.

Suarez got the nod after scoring the crucial opener against his former side while Messi doubled Barcelona’s lead before scoring a fantastic free kick to leave Liverpool with it all to do at Anfield.

Who are you voting Player of the Week? 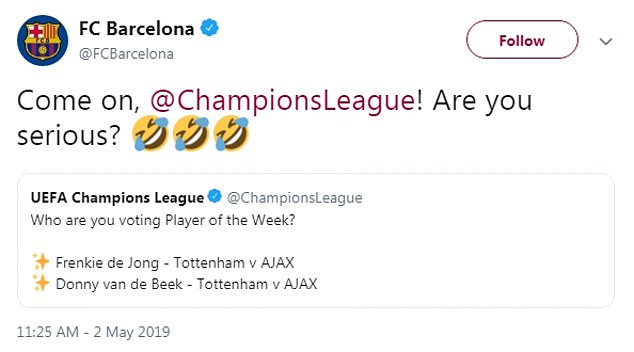 While each nomination has its own merits, Barcelona jokingly believe the answer is obvious in that Messi should be named as the competition’s player of the week without question.

After UEFA posted the poll, Barcelona replied: ‘Come on, @ChampionsLeague! Are you serious?’

Messi has won the accolade three times already this season but surprisingly missed out on the award the whole of last season.