Barcelona manager Ernesto Valverde will stay on next season

‘He is the coach we want’: Barcelona manager Ernesto Valverde will stay on next season as president Josep Maria Bartomeu backs him despite failing in Champions League

Barcelona president Josep Maria Bartomeu has confirmed Ernesto Valverde will stay on as manager next season and that he has the full backing and support of the board.

The 55-year-old’s future had been questioned following last week’s humiliating exit from the Champions League at the hands of Liverpool.

It represented another failure from Valverde to win the European title, despite his side’s domestic dominance, but it seems he has been handed a reprieve.

According to Mundo Deportivo, Bartomeu insists that the club are ‘very happy’ with their manager, who has won back-to-back league titles and could win successive doubles with a final victory in the Copa del Rey against Valencia later this month.

‘Ernesto already said the other day, he has the support of the president and the board, because it is the coach we want, has a contract in force and we are very happy with him,’ Bartomeu told reporters on Thursday.

‘The planning for next season has been underway for some time. There are already signed players and we will continue talking when the Copa final is over.

‘Now it is about the players recovering from the mental shock that we suffered, but the result of the Copa final will not be decisive for anyone.

‘We come from a painful defeat and we must recover our spirit, our enthusiasm and our desire to compete, but we are recovering from the European elimination.’ 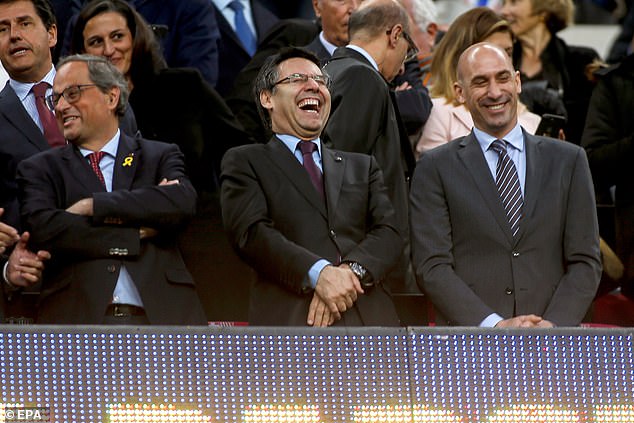 The Spanish giants slumped to a 4-0 defeat at Anfield in the second leg of their semi-final last week as the English club overcame a 3-0 deficit to progress against the odds.

Speaking last week, Valverde remained defiant as he now prepares his team for the final week of the La Liga season and then for the Copa del Rey final.

‘I feel strong, I’m good. I want to take the next step, I won’t hide under a stone,’ Valverde said.

‘I feel like I’m in The Great Escape – they have just caught me and I’m in the punishment cell.

‘After a blow like that, everything wobbles, we know what this show is like, if something like this happens you have to break and burn it all, but then you have to put it all back in its place.’