Barcelona could be without vital midfielder Sergio Busquets for their Champions League quarter-final first leg after picking up a toe injury in their victory over Chelsea.

The Catalan club have confirmed Spain international Busquets will miss three weeks of action having injured his toe against the reigning Premier League champions.

‘Tests have confirmed that Sergio Busquets has a hairline fracture on the fifth toe of his right foot. He will be out for approximately three weeks,’ said a club statement on Thursday.

Busquets was taken off for Andre Gomes in the 61st minute of the contest, which the Catalans won 3-0 to go through to the quarter-finals of European football’s elite club competition for an 11th consecutive year.

He will miss Barca’s Liga games at home to Athletic Bilbao on Sunday and away to Sevilla on March 31, as well as Spain’s international friendlies against Germany and Argentina.

Busquets, 29, has played in all of Barca’s Champions League games this season and only missed three of their league games.

Barca will learn their Champions League quarter-final opponents when the draw takes place on Friday. 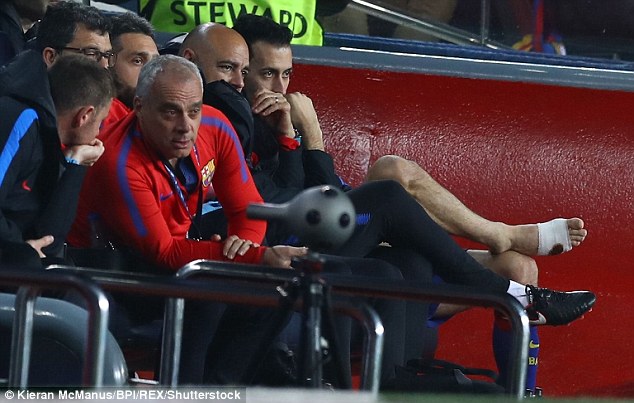 Busquets had to leave the pitch against Chelsea, and was seen with heavy bleeding on his foot 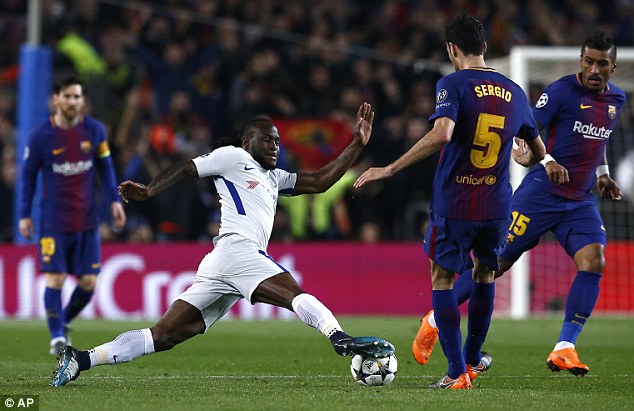 The first leg games are scheduled to play on April 3 and 4, with the return games on April 10 and 11.

Liverpool and Manchester City stand as England’s only representatives left in the competition, and are joined in the final eight by Barca, Real Madrid, Juventus, Bayern Munich, Sevilla and Roma.