The financial mess that Barcelona find themselves firmly in the midst of is truly staggering. Over the years, they have been dragged into mountains of debt and now, under new leadership, the painful road to recovery has begun.

Unfortunately for them, there is no easy fix. In layman’s terms, Barcelona now have their hands tied behind their back, and they will be unable to register any new players – including Lionel Messi – unless they make swingeing cuts.

They must make drastic savings of around €200million (£170m) this summer, or they will remain in a bind ahead of next season. That will see first-team stars offloaded and slashes in salaries as part of LaLiga’s crackdown. 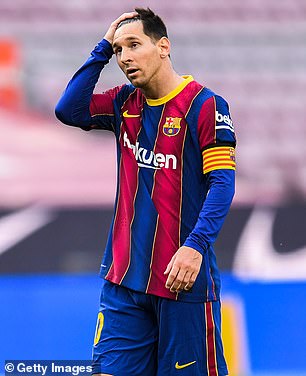 To many, the economic restrictions in place in the top-flight in Spain is a very welcome move in football. Its purpose is to prevent out of control spending and ensure that clubs operate firmly within their means.

The finances of teams are thoroughly scrutinised by analysts working in an economic control department, and a cost limit for their squads is then drawn up, which clubs simply must stick to.

This limit establishes the highest amount that can be splashed out on players, coaches, as well as the reserve teams and academy. It is up to clubs as to how they spend this money, but the cap cannot be surpassed.

In effect, it is a similar system to UEFA’s Financial Fair Play. The experts pore over reams of data relating to the finances of every club, with expected revenues, profits and losses, saving and debt repayments all weighed up. 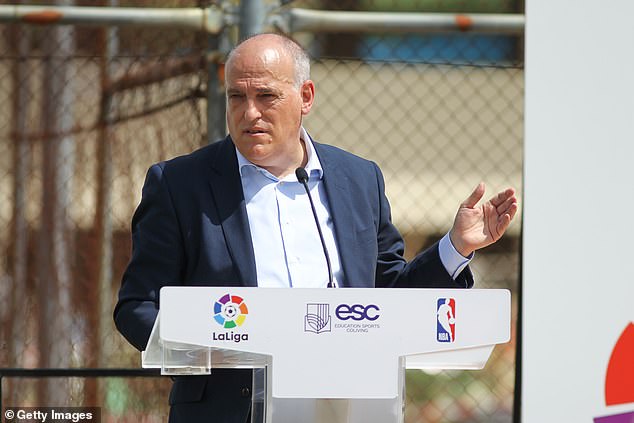 Only when LaLiga are satisfied can clubs register new players, and this is the dilemma Barcelona are currently facing. As it stands, they don’t have the permission needed to add to their first-team for the new campaign.

The ownership under Josep Bartomeu was a disaster, and the years of mismanagement have come back to haunt Barcelona. The club admitted to liabilities of around €1.3 billion (£1.1bn) and their cost cap has fallen drastically.

As a result, they have been scrambling around in recent weeks, desperately looking for fixes. 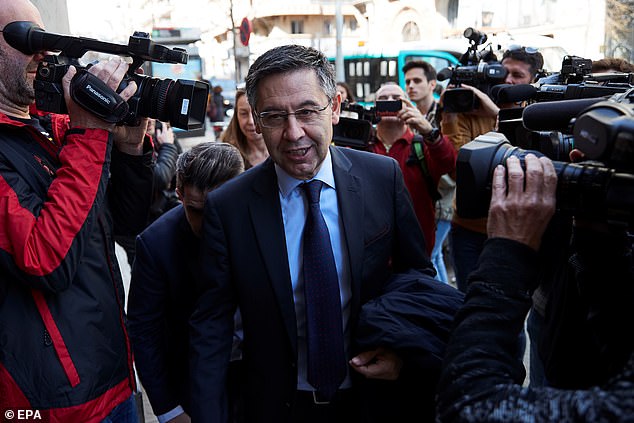 But now, they may have found one. A swap deal between high-earner Antoine Griezmann and Saul looks to be edging ever closer, and offloading the former would be a big step in the right direction at the Nou Camp.

Griezmann’s contract at Barcelona is heavily incentivised, but with bonuses his basic salary of €12m (£10m) shoots up to €20m (£17m). Saul would arrive for less than half of that figure, a saving that pushes his new club back towards the cap.

In an ideal world, either Philippe Coutinho or Ousmane Dembele would be sold instead, but after injury problems these deals may be impossible over the coming weeks. This has forced Griezmann into the firing line.

Sportsmail has reported that Griezmann has stayed in touch with his former team-mates in Madrid, and he even told them that he’d made a mistake in leaving in the first place. His return looks likely, although Saul may not be as satisfied. 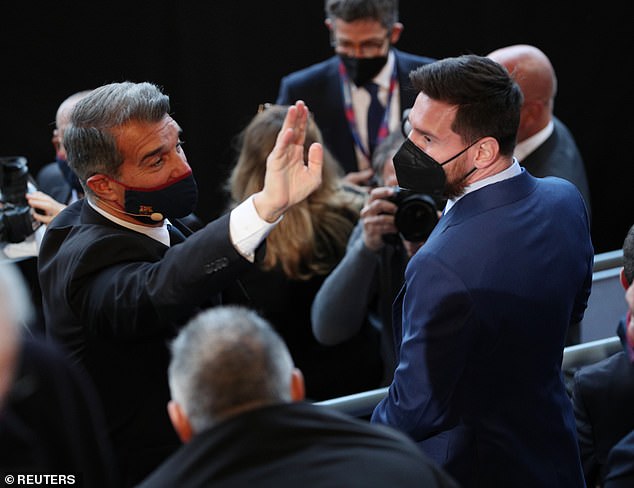 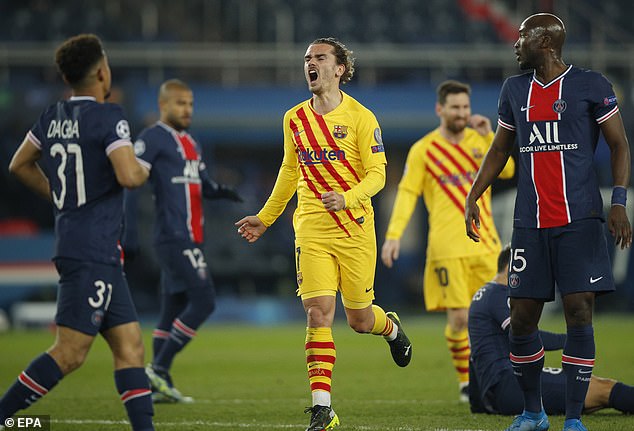 With Griezmann and his handsome earnings off the wage bill, Barcelona may then be able to finally register their talisman Messi – as well as new arrivals Sergio Aguero, Memphis Depay, Emerson and Eric Garcia.

The news broke on Wednesday that Messi has agreed to a 50 per cent pay cut on a whopping five-year deal, but while the club’s best-ever player – and perhaps the greatest footballer in history – takes a small hit, his team-mates may be axed.

Barcelona need players such as Sergio Busquets and Gerard Pique to agree to pay cuts, and the club are understood to be hopeful that Messi has laid down the marker by giving his approval to the 50 per cent slash.

Samuel Umtiti is another high earner that has been shown the exit door, while other first-team regulars, such as Jordi Alba and Sergi Roberto, also face uncertainty in this window with Barcelona considering their options. 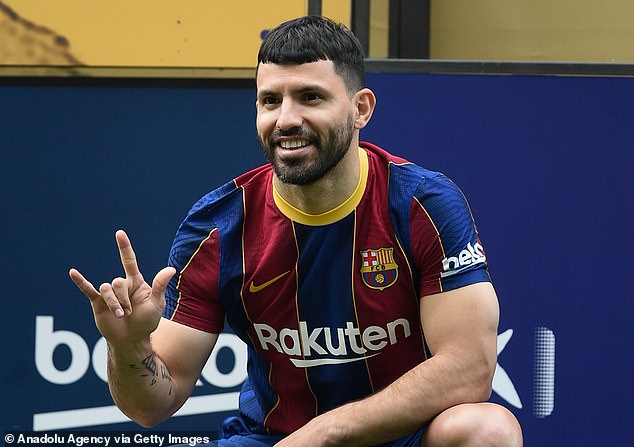 Aguero left Manchester City and joined Barcelona for free, but can’t be registered officially yet

Everyone, aside from Messi, looks to be at risk. It’s a situation no club wants to find themselves in, but it has now become inescapable for Joan Laporta and the board. They have no choice but to act, otherwise a host of stars will be stuck in limbo.

A game where they call LaLiga’s bluff hardly looks advisable, either. Back in 2014, Pedro Leon refused to take a pay cut to be registered to play at Getafe and opted to open a legal case against the league.

He was able to play after being forced out of action, but eventually the legal system in Spain sided with LaLiga. As a result, he was left hovering at his club but unable to take to the field as Getafe would have gone over their limit.

Barcelona are dicing with the same fate, and that’s even with the leniency currently being shown to clubs in the wake of the Covid-19 pandemic.

Teams are able to use 25 per cent of the profits from transfers on new costs, but the other 75 per cent must be used to pay off money they owe. LaLiga has allowed this to ensure that the transfer market remains healthy. 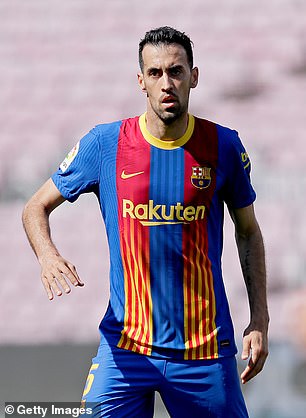 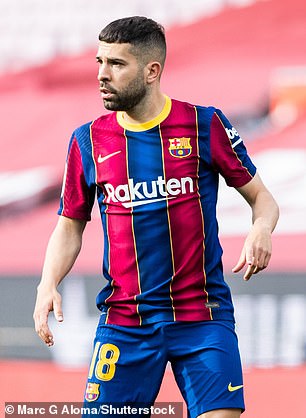 But what happens next? The worst case scenario for Barcelona is that they are unable to return to their limit. This would see all of their new signings, including Messi, stuck on the side-lines for the foreseeable future.

They will, of course, pull off every trick in the book to avoid this – but further drastic measures may force out a number of first-team names that they would rather keep, all the while further aggravating their loyal fanbase.

Even Messi’s bumper new contract reeks of kicking the can down the road, a policy that has now circled back around and seen Barcelona force to live up to their self-made demons.

They can avoid this no longer, and the damage will be devastating.