It’s almost nine years since Lionel Messi took flight in the Manchester United penalty area in Rome’s Olympic Stadium, hanging in the air just long enough to get his head to Xavi’s cross and direct it past Edwin van der Sar.

It was the second goal in Barcelona’s 2-0 win over Manchester United and there will be a few memories jogged on Tuesday night for Messi and for two of his team-mates.

Back in 2009 Cristiano Ronaldo was still playing for Manchester United – yet to score any of his 446 goals for Real Madrid. 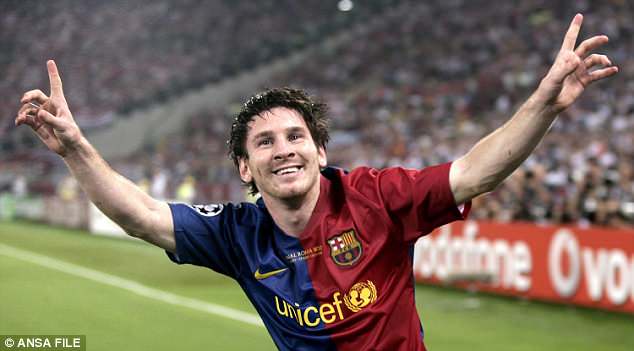 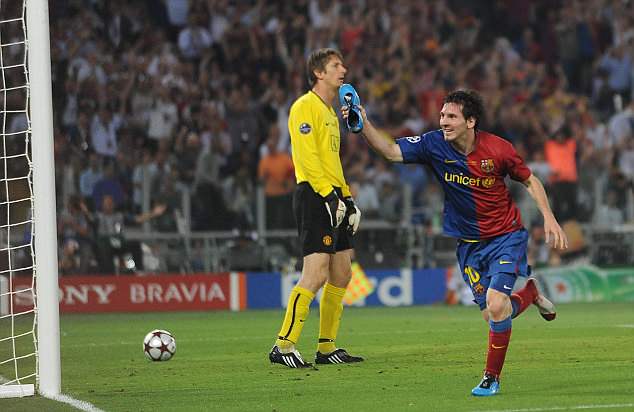 Sir Alex Ferguson was still the all imposing figure at Old Trafford and Pep Guardiola was in his first full season at Barcelona. But not everything has changed.

Messi, Sergio Busquets and Andres Iniesta were all vital that night in Rome.

All three will be on the pitch against Roma and all three will be just as important to their team, as they were almost a decade ago, if Barcelona are to lift the European Cup in Kiev next month.

Those three surviving players from the team that beat Manchester United will face Eusebio Di Francesco’s team on Tuesday night.

Busquets, perhaps with pain killing injections, Iniesta in his last ever season for Barca, and Messi fresh from scoring his 40th hat-trick for the club at the weekend.

Messi’s magic moment in Rome was brilliantly captured in that iconic image of him twisting back to get his head to the cross as Rio Ferdinand and an aghast Van der Saar look on. 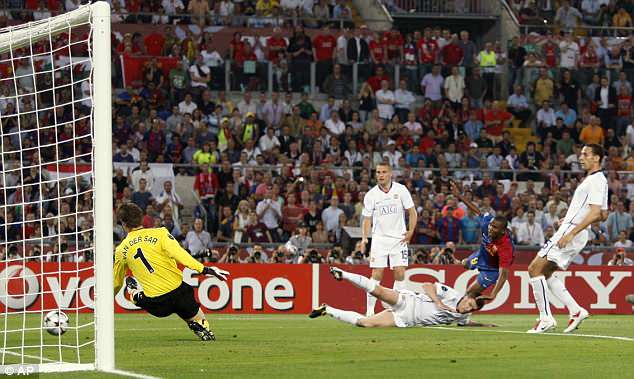 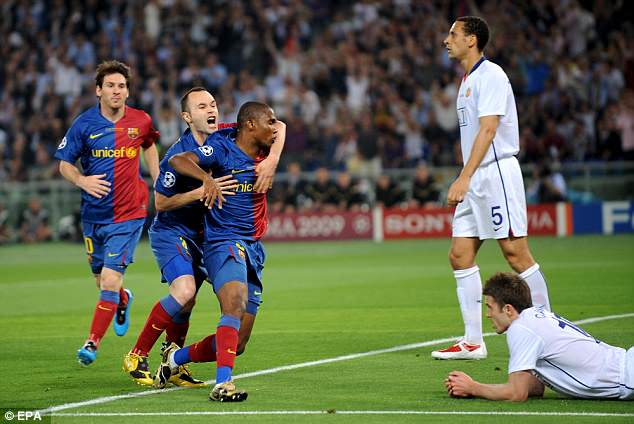 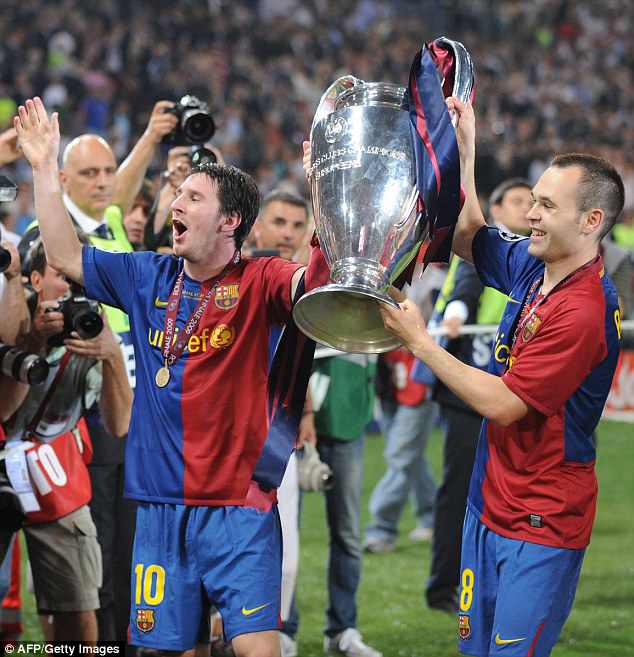 ‘He’s no good in the air,’ had been muttered a few times in the build-up as commentators wondered if the Barcelona No 10 did have a weakness.

He has now scored 100 Champions League goals for Barcelona and that remains his favourite, precisely because it was with his head, and because it meant so much to a Barcelona team that at the time were in the midst of an incredible six out of six trophy run in Guardiola’s first season in charge.

It meant a lot to Iniesta too. He had been a sub three years earlier in Paris against Arsenal and injury had nearly ruled him out of the Rome final.

But it had been his last minute goal against Chelsea at Stamford Bridge in the semi-final that had put them there so he played through the pain barrier under strict instructions not to shoot with his right foot so as not to aggravate the right thigh injury.

He set up the first goal for Samuel Eto’o on the night and he is still the man Barcelona look to for imagination and inspiration in midfield.

Without his intervention, Messi might not have given Barcelona their away goal at Stamford Bridge in the last-16. 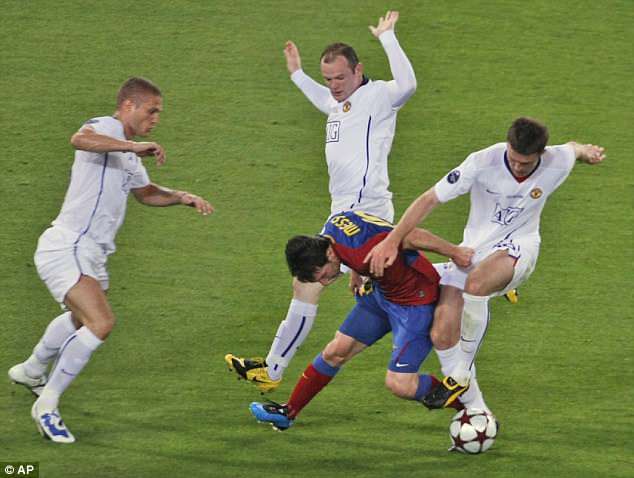 It requires the attention of United’s Nemanja Vidic, Wayne Rooney and Michael Carrick to stop Messi during the final 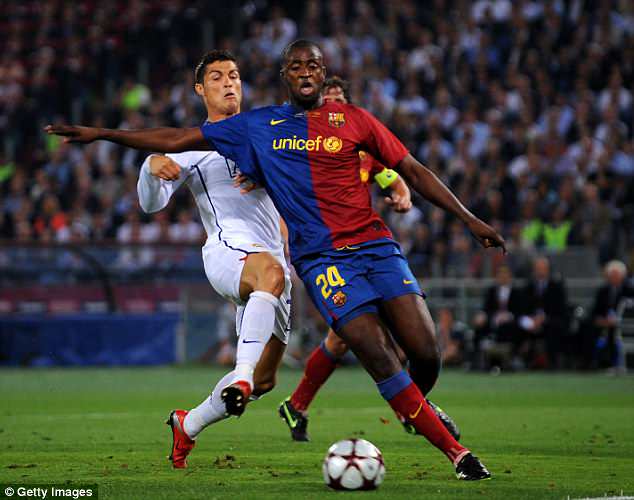 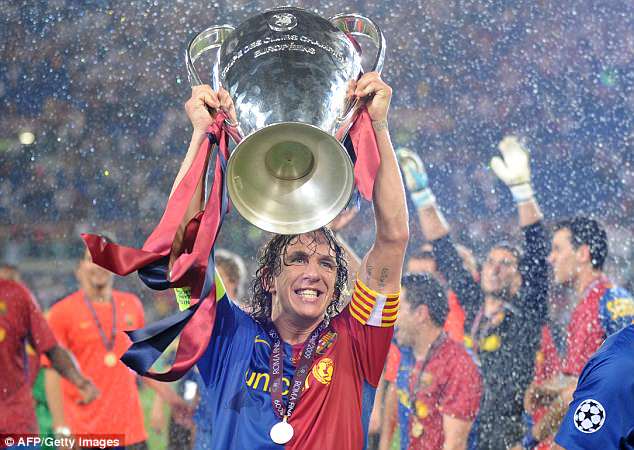 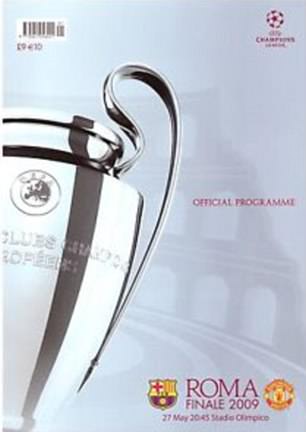 The cover of the match programme

With his long-term successor Philippe Coutinho still Champions League cup-tied Iniesta is being wrapped in cotton wool in the league so that he can make a difference in what is left of his last European Cup run before he disappears to China for a lucrative last few seasons of football.

When he goes Busquets will be the last man standing from that Xavi, Busquets, Iniesta trinity that made Barcelona so hard to get the ball off much less defeat.

His importance the team is underlined by the fact that if he plays tonight it will be with pain-killers as it was in the first leg when he asked to come off in the second half.

He remains the gently destructive influence in midfield that he has always been, dispossessing opponents without ever seeming to actually make a tackle.

And Barcelona lean on his passing more than ever before. He is so often the man who finds Messi or Iniesta.

The three of them ought to have it easy on Tuesday night back in the Olympic Stadium. 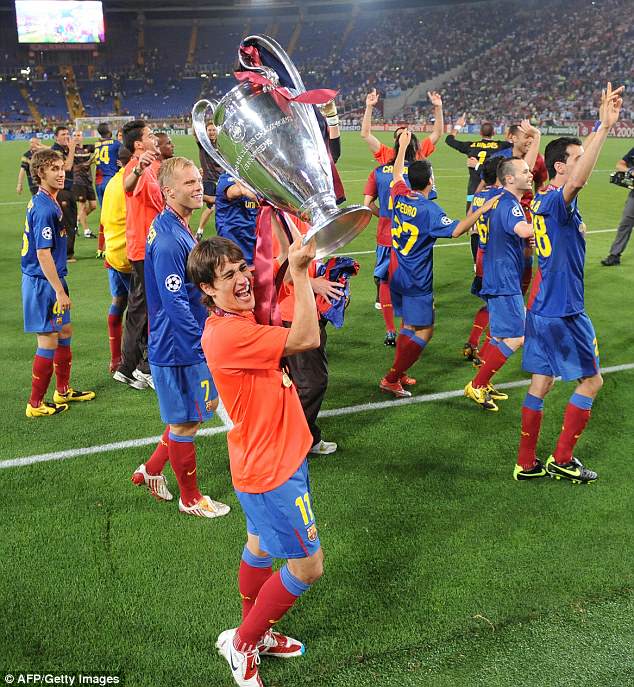 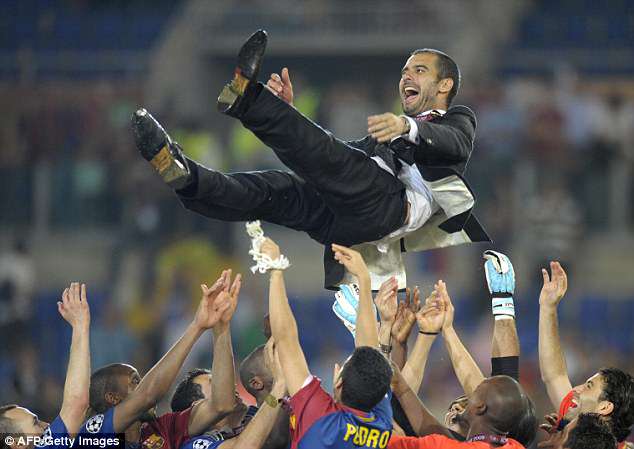 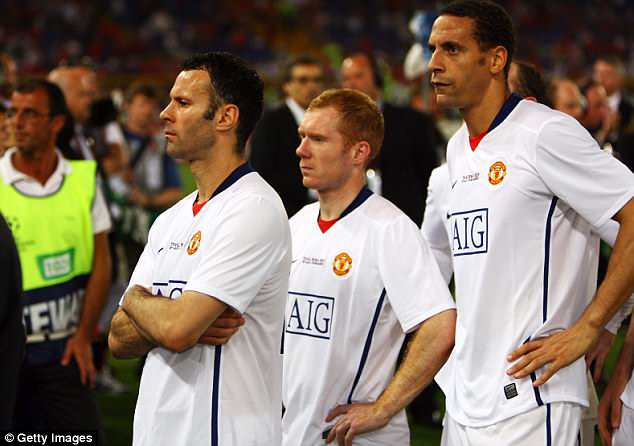 Disappointment is etched on the face of United’s Ryan Giggs, Paul Scholes and Rio Ferdinand 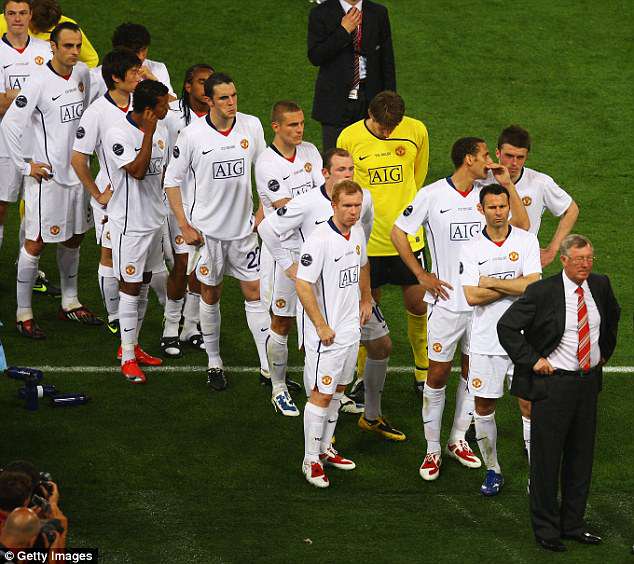 Roma were unlucky to leave the Camp Nou against a below-par Barca with a 4-1 defeat but it gives them little chance of turning things around.

The first leg margin might even encourage Valverde to use Busquets, not long back from a foot fracture, sparingly as he did last week.

Iniesta and Messi – appearing in the same Champions League game for the 100th time – are likely to be involved for longer.

What seems certain is that some point the three of them will be back on the Olympic Stadium pitch tonight with memories of their first Champions League they won together flooding back.

And the sense that they might have one more left in them before Iniesta goes his own way this summer.