The ritual of paying for a meal can be a real chore – not least the difficulty of catching a busy waiter’s eye.

Going through the details on the bill, checking if a tip is included, and then having to negotiate the buttons on a card reader can be tedious, even stressful.

Throw in the difficulty of working out how to split it, particularly if someone has enjoyed an expensive glass of wine when everyone else was on diet Coke, and a pleasant night out can turn ugly.

Now Barclaycard claims to have come up with a solution in the form of ‘Dine and dash’.

It works in a similar way to ‘tap and go’ technology which is changing the way people pay for low value items with a card.

Barclaycard have come up with a ‘dine and dash’ app to split the bill easily. Using the app with the ‘tap and go’ box means consumers can add a tip, apply a discount code or split the bill over multiple cards quickly

Essentially, a small black box – or totem – sits on the restaurant table and takes care of the entire bill paying process.

Diners, who have downloaded the ‘dine and dash’ app to their smartphone, tap the handset on the totem when they sit down.

This check in process is confirmed when a small light on the totem turns on and flashes blue.

They then order from a waiter as normal, who will be free from handling bill payments, and therefore, in theory, able to provide much quicker service.

After placing the order, diners can also use the smartphone app to add a tip, apply a discount code or split the bill between several cards.

All customers are able to watch their bill in real time using the app and they will also receive a digital receipt once they have left.

So-called proximity tracking can identify when people have left the restaurant and will charge the cost of the meal to their card. This is done using beacons that create a detection field and identify when the smartphone – and its owner – have gone.

The technology should ensure that diners are only checked out upon leaving the restaurant and the beacon field, and not when moving around inside or immediately outside.

The waiting staff know that a bill has been settled because the light on the table totem will flash – and stay – green for a period.

This means that they will not have to chase people down the road to get them to pay up.

Barclaycard said the technology has been launched in response to research showing over one in three – 36per cent – restaurant goers find waiting for the bill the most frustrating part of eating out.

A survey found that some people have had to wait as long as 19minutes to pay and get out of the door. 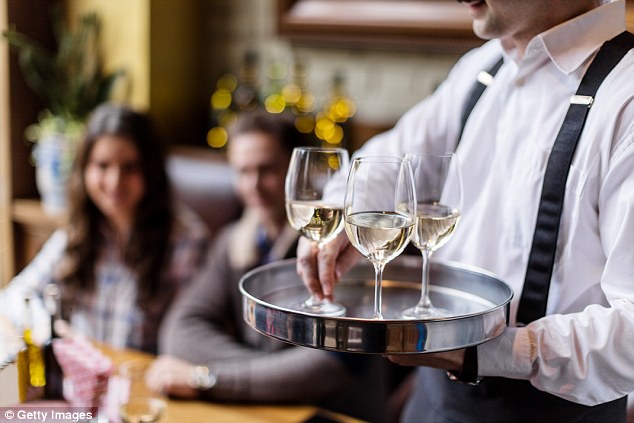 Diners then order from a waiter as normal, who will be free from handling bill payments, and therefore, in theory, able to provide much quicker service

And one in four would consider walking out without paying if the wait for the bill was too long.

The card company’s research also found that two in three restaurant owners like the idea of a so-called ‘invisibill’, created on a smartphone, on the basis this can improve service and customer satisfaction by doing away with delays around paying.

The new technology is to be trialled for one day on March 13 at a central London outlet of the Prezzo chain, in St Martins Lane Avenue.

The managing Director of Future Payments at Barclaycard, Nick Kerigan, said: ‘Eating out is something we all look forward to, yet our research shows that waiting to pay is an increasing frustration.

‘Building on our experience in ‘invisible payments’, we wanted to create an innovative solution that removes any barriers to enjoying the meal, whilst also helping restaurants deliver great service and keep those diners coming back.

‘By taking the pain out of payments, Dine & Dash is a ‘win win’ for both consumers and restaurants. We’re excited to see this solution in action as we partner with Prezzo.’ IT Director at Prezzo, Dave Broom, said: ‘Finding better ways to serve our customers is at the top of the agenda.

‘We believe we have found a unique opportunity with Barclaycard’s Dine & Dash solution as it makes payment simpler and quicker. We’re really looking forward to testing this exciting new technology.’