Barclaycard customers who have had their credit limits cut by as much as 95 per cent have faced yet more confusion, after wrongly being told new limits were based on their average balances over the last two years.

Several customers, many of whom have had perfect payment histories, told This is Money they were informed the cuts were based on average spending, rather than the maximum balance they had accumulated.

It would mean those who only used their card for occasional big purchases like holidays to benefit from higher consumer protections would be left with a limit which would not cover them.

Some 100,000 customers of Barclaycard are facing huge cuts to their credit limits

For example, someone who spent £2,000 annually on a family holiday and made no other purchases on the card, could be left with a credit limit of as little as £166 if their average balance was used to calculate it.

Meanwhile consumer spending has largely slumped over the last 13 months due to the pandemic and multiple lockdowns, with billions of pounds being cleared from credit card balances.

Following Barclaycard’s proposed cuts, some customers are facing spending limits as low as a few hundred pounds, which in some cases are set to be reduced by as much as 99 per cent.

This is Money has received more than 450 emails about the impending cuts since last Monday, with many from long-standing customers angered by the proposals and cutting up their Barclaycards in protest.

The credit card company flatly denied on multiple occasions that average balances would be used to calculate new credit limits.

However, multiple customers have told This is Money this is the explanation they have been given by its customer services. 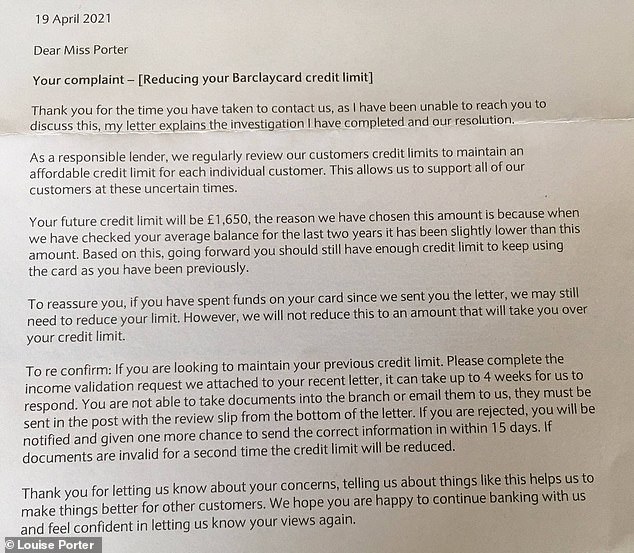 Louise Porter was told the cuts were down to her average balance over the last 2 years. However, Barclaycard denied it was making cuts on this basis

It said: ‘Your future credit limit will be £1,650, the reason we have chosen this amount is because when we have checked your average balance for the last two years it has been slightly lower than this amount.’

Louise previously told This is Money she used the card for one-off large payments and then paid them off over the course of a year.

She added: ‘Their criteria of using average balance is stupid, they should surely look at the highest balance. I don’t understand their logic, or lack of it.’

Some reported similar experiences. Mark Uffindell, another who wrote to This is Money, said: ‘I have recently been informed by Barclaycard that they are reducing my expenditure limit from £8,000 to £400.

‘The reason given when I contacted them was that £400 was my average expenditure with them.

Your future credit limit will be £1,650, the reason we have chosen this amount is because when we have checked your average balance for the last two years it has been slightly lower than this amount.

‘My average account is between £1,200 and £3,000 per month. The proposed facility wouldn’t pay my monthly fuel bill.’

He added: ‘As with many customers I have a direct debit to pay the required minimum payment every month although the full amount is generally paid monthly before this facility kicks in.

‘I am, again I suspect like many other customers, looking to apply for another card. I feel dumped on and put out that I have to spend time now looking for alternative arrangements.’

A third customer, Daniel James, is having his spending limit reduced from £12,500 to £2,200, which he described as a ‘slap in the face’ and was initially below his current balance.

He said: ‘I complained about this and was then told they averaged out how much a customer uses on their card.’

The move means more confusion for an estimated 100,000 customers already struggling to understand Barclaycard’s rationale for the proposed cuts, which it pinned on affordability concerns amid the coronavirus pandemic.

We reported last week the company, which along with Barclays debit cards accounts for nearly £1 in every £3 spent in the UK, appeared to have applied a one-size-fits-all approach to borrowers.

Some, including Louise, have been told they need to provide details of their income, which in many cases has remained the same or even improved in recent years, to keep their old credit limit but were also told the company had never checked on their financial situation. The company has denied this.

Those affected by the Barclaycard credit card cull fall into two categories. There are those who have been told they can appeal the decision if they provide the bank with up-to-date information about their incomes, and others who cannot.

For the first group, the matter is quite straightforward if they wish to try and keep their Barclaycard limit. They can write to the bank and argue why the decision should be reversed and their old limit given back to them.

However, there is no guarantee this would be successful. 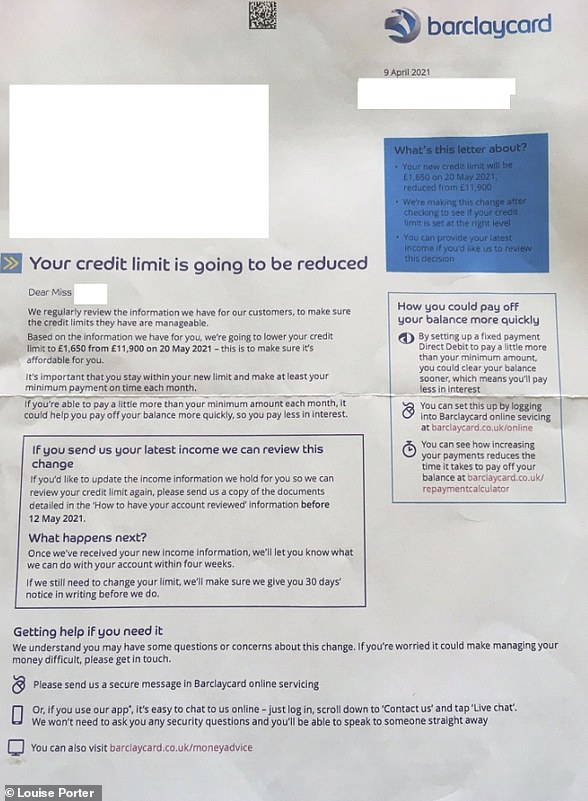 If someone wishes to apply for a new card, it is first of all worth checking their chances of eligibility.

The likes of ClearScore and Experian offer this, which allows applicants to see how likely they would be to be accepted for a card without carrying out a formal application which shows up on a credit file.

Experian also offers a service for some card providers which lets applicants see if they’ll get a high enough credit limit to cover their balance transfer which, given what has happened with Barclaycard, may be worth checking out.

Sara Williams, a debt adviser who runs the blog Debt Camel, added: ‘So many customers have had their limits slashed that Barclaycard don’t seem to be targeting people in financial difficulty specifically.

‘But some people affected will be struggling. If this is you, this is a good opportunity to talk to a debt adviser such as StepChange about your options – getting the interest frozen on credit card debts could take a lot of the pressure off.’

She added: ‘If your limit had been stupidly high before and this has caused you a lot of trouble over the last few years you may have good reason to make an affordability complaint and ask for a refund of the interest you have paid.’

As a result, This is Money has called on the company to reconsider its cuts for those whose finances have remained stable.

However, those whose new limit is higher than their maximum balance over the past two years cannot appeal the decision.

It told This is Money after looking into Louise Porter’s case she was given the wrong explanation ‘due to a human error’. Instead, it said her new limit was ‘based on a personal affordability assessment’ and apologised.

A spokesperson said: ‘I can confirm that Barclaycard does not use customers’ average balances to calculate limit decreases.

‘For some customers, their new limit is higher than their peak balance over the past two years, which means that they should be able to continue using the card in the same way as before.’

They added: ‘We have a duty of care to our customers to make sure their credit limits are affordable so that they are able to manage their borrowing effectively.

‘To make an affordability assessment, we review our customers’ finances across their full lending portfolio to ensure we are lending responsibly and that they are not borrowing more than they can comfortably afford.

‘If customers feel they can afford a higher limit than communicated, we ask they get in touch with us so we can re-review our assessment. We are extending the time customers have to provide this additional information until the end of May and will not be reducing any limits before this.

‘Customers can reach us by contacting us on the details provided in our correspondence to them.’