Barclaycard customers have called on it to reverse heavy-handed credit card limit cuts hitting cardholders whose financial circumstances have remained steady – or even improved – over the last year.

This is Money received a deluge of responses from readers by email and on social media after we reported on the growing backlash against the credit card provider yesterday.

Credit limits have been slashed by more than 90 per cent under the guise of ‘responsible lending’ but it increasingly appears the company applied a one-size-fits-all approach to borrowers.

As yet more cases of seemingly illogical credit limit cuts to customers whose finances remain steady and have never been checked emerge, This is Money is calling on Barclaycard to reconsider.

Of the more than 400 responses we have received since Monday morning, many are from customers who said their spending power was being cut back despite them never having had problems before or suffering a loss of income.

And while the lender has said in certain circumstances they can appeal the decision by providing details of their income, customers told us this information had never previously been requested.

Others were told by Barclaycard that it was cutting their limit due to the coronavirus pandemic’s effect on people’s finances, but then had the credit card firm admit that it had never checked on their financial situation.

Mark Gough, 65, told This is Money: ‘I got the letter from Barclaycard last week advising my limit of £14,600 is being reduced in May to £1,850, hardly enough to book a decent holiday.

‘I’ve had the card for 23 years and in all that time they’ve never checked my financial status. I retired in 2017 after working for a bank and, ironically, my wife and I are now more comfortable financially than we’ve been for years.’ 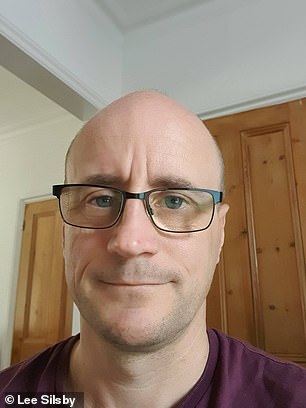 He added: ‘I plan to respond to the letter with the information they’ve asked for which will take me some time and cost in printer ink. I will be intending to pursue them to the Ombudsman until, and unless, I get my full limit back and compensation for my time and efforts dealing with them.’

Another customer, Claire Davenport, said: ‘I have recently had my Barclaycard limit reduced from £9,100 to £6,900 despite the fact that I am about to go back to work on the same number of hours as I used to do.

‘I have also been able to manage on part furlough before this and have never missed any Barclaycard payments or had to have payment holidays.’

This is Money and our sister title Money Mail have reported since last Wednesday on the fact many borrowers who have had their credit limits cut by huge sums have never missed payments or struggled to make them, despite the coronavirus pandemic.

‘I’d been with them for eight years with no problems and no missed payments’, she said. ‘I’d never maxed out the card and had always used it responsibly. I spent about £1,000 at most, and at the time they reduced my limit I had £100 on the card. It was a card for emergencies, £250 won’t cover much.

‘I don’t know what they’re playing at.’

Those affected by the Barclaycard credit card cull fall into two categories. There are those who have been told they can appeal the decision if they provide the bank with up-to-date information about their incomes, and others who cannot.

For the first group, the matter is quite straightforward if they wish to try and keep their Barclaycard limit. They can write to the bank and argue why the decision should be reversed and their old limit given back to them.

However, there is no guarantee this would be successful. 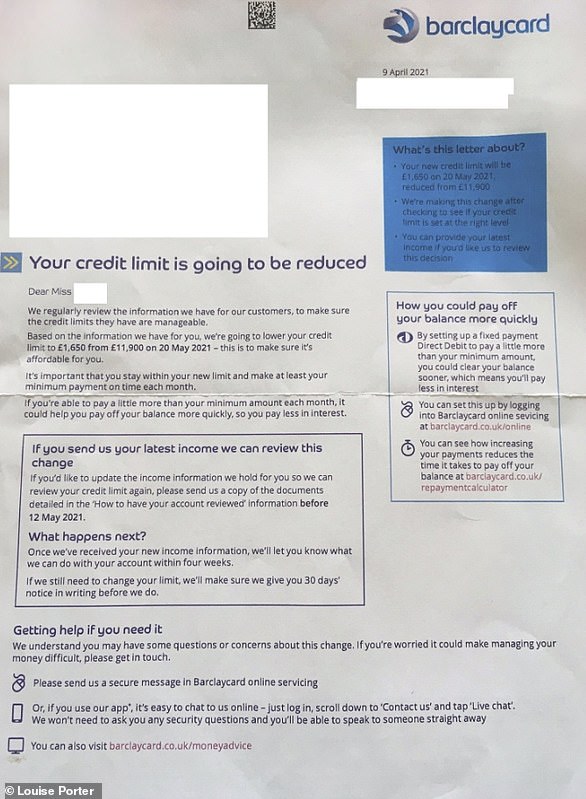 If someone wishes to apply for a new card, it is first of all worth checking their chances of eligibility.

The likes of ClearScore and Experian offer this, which allows applicants to see how likely they would be to be accepted for a card without carrying out a formal application which shows up on a credit file.

Experian also offers a service for some card providers which lets applicants see if they’ll get a high enough credit limit to cover their balance transfer which, given what has happened with Barclaycard, may be worth checking out.

The bank blamed the economic impact of the coronavirus for its decision to cut the credit limits of more customers over the last 12 months.

However, the average UK Equifax credit score actually increased 11 per cent to 398 out of 700 between March 2020 and March 2021, according to the credit-checking service ClearScore.

This is largely because things like mortgage and credit card holidays did not hit customer’s credit files.

However, the cutting of credit limits could do, because a higher utilisation of a card’s limit may suggest a reliance on debt and a need to max it out.

Emma Hasler and many others have decided to pay off their debts and cut up their cards in protest at the changes. However, others are choosing to fight their corner and to regain their old spending power, by providing Barclaycard with details they insist it has never previously asked for.

Some who are also customers of Barclays, its parent bank, wondered why they needed to provide this information to the company in the first place and why it did not have it on file.

Barclaycard said: ‘We use our data, and data held by credit reference agencies, to review each customer’s individual financial circumstances when we make a lending decision.

‘If customers feel they can afford a higher limit than communicated, we have provided information on how to appeal the decision by verifying their income.

‘We have extended the amount of time to provide us with the relevant documents from 30 days, until then end of May – no limits will be reduced before then.’

‘My limit is being cut below my current balance’

And affected customers also hit back at another part of Barclaycard’s defence of its actions.

It told This is Money: ‘When we reduce a customer’s credit limit, we will not reduce it to below their current balance, and we will ensure that they at least have sufficient headroom on their account to continue essential spending.’

It added some customers would be unable to appeal the reduction because their new limit was higher than their maximum balance in the last 24 months, which covers a period when spending slumped as a result of the pandemic.

They told me that they wouldn’t charge me for going over my limit, given that they would be the ones putting me in that position, but that I would be contacted to get me to pay it off. I was so disgusted I paid off the balance and reduced the limit myself.

However, several people affected have said their limits are being reduced to below their current balance. Although Barclaycard in January waived a £12 fee which would penalise those going over their limits, this has left them angry and frustrated.

Claire Brummell, from London, said: ‘I had never missed a payment and my credit score was good enough to get credit with another company the same day. But my limit is being reduced down to £250 when my current balance is nearly £900.

‘They told me that they wouldn’t charge me for going over my limit, given that they would be the ones putting me in that position, but that I would be contacted to get me to pay it off.

‘I was so disgusted with the treatment that I paid off the balance and proactively reduced the limit myself so as to potentially be able to get credit elsewhere. But seeing that they were going to drop my limit to lower than the current balance I thought was appalling.’

Amy Forster, another person whose income has increased in recent years, said: ‘I have received a letter, stating that my credit limit will be decreased from £4,000 to £450. What’s even more annoying is that my balance is £513.

‘In order to maintain a good credit score, I like to use below 50 per cent of my credit limit and now it seems like they’re just looking to take that away from people and/or cause financial difficulties for their customers.

‘I did try to speak to them on the phone about this, but I honestly just felt like I was being fobbed off and given excuses. I’ve yet to submit my payslips for this to be re-evaluated, given that I earn more now than I did when they approved me for a £4,000 limit.’

Barclaycard again denied any such reductions would take place.

It added: ‘When we reduce a customer’s credit limit, we will not reduce it to below their current balance, and we will ensure that they at least have sufficient headroom on their account to continue essential spending.

‘It’s important to note that credit limit decreases do not take place immediately.

‘Therefore, some customers may have recently spent money on their account – after we calculated their maximum account balance – which means that their current balance is higher than the credit limit communicated.

‘We want to reassure these customers that their limit will not be reduced to below their balance – there are checks in place before the limit decrease comes into effect, which automatically prevent that from happening.’