How you can boost your tax return by hundreds of dollars just by choosing the right accountant – as the Barefoot Investor reveals the average Aussie gets back $2,574

Australians can significantly boost their tax refund by taking their time to pick the right accountant.

Middle and average-income Australians are set to receive tax cuts of up to $1,080 just for putting in their annual tax return.

Even before the tax cuts were legislated, the average tax refund stood at $2,574, Australian Taxation Office data for 2015-16 showed.

With the tax cut added, average-income Australians are on course to receive $3,654.

Their success in claiming work-related tax deductions, however, depends on finding the right accountant.

Bestselling author Scott Pape, who is also known as the Barefoot Investor, has urged taxpayers to email a prospective accountant outlining their needs and asking about their experience and charges.

Pape suggested their response could be telling.

‘They get back to you quickly, preferably under 24 hours,’ he told his Barefoot Investor column readers in News Corp’s Sunday newspapers.

‘They sound polite and professional, and that their expertise lines up with your needs.’ 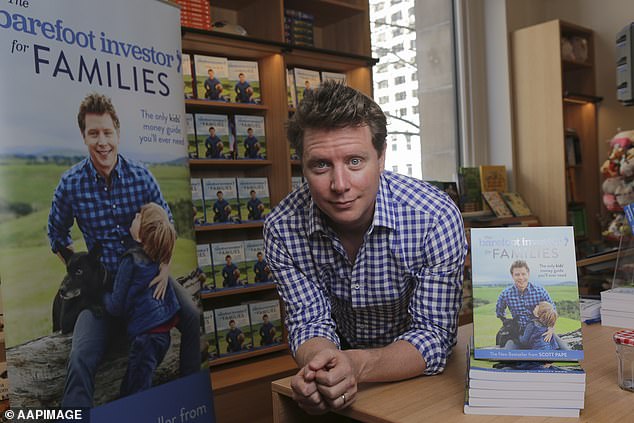 Bestselling author Scott Pape, who is also known as the Barefoot Investor, has urged taxpayers to email a prospective accountant outlining their needs and asking about their experience and charges

HOW MUCH ARE YOU GETTING BACK?

‘The same way you find a good hairdresser: ask your friends,’ he said.

‘That being said, bad tax advice is worse than a bad haircut, so I’d also suggest you jump on to the Tax Practitioners Board website and search for a few accountants in your area.’

Tax accountants H&R Block are selling the fact they are open on Saturdays, but independent accountants may also be flexible with their opening hours.

More than 4.5million Australians earning $48,000 to $90,000 a year are receiving the full $1,080 in tax relief, announced in the May budget and passed by Parliament earlier this month.

Employers with more than 20 staff are no longer required to provide group certificates, which means taxpayers need to obtain it via the myGov website or through a tax accountant.

Online tax returns are already partially filled in by the government to take account of private health insurance details and bank interest. 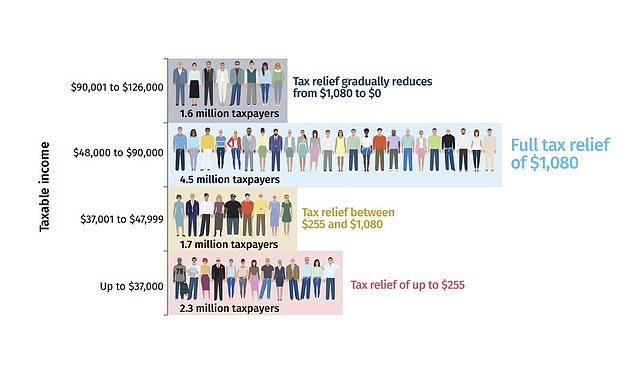 This graph shows how the tax cuts are broken down per bracket – with 4.5 million taxpayers getting the full cut of $1,080

HOW AUSTRALIANS CAN GET THEIR TAX CUT VERY SOON

Tax accountants H&R Block are recommending that Australians find an accountant who is open on Saturdays if they want to have their tax returns processed as soon as possible.

The group’s director of tax communications Mark Chapman said finding an accountant that opened after hours and weekends made a huge difference.

‘Much better than having to take time off work to get it done at an accountant that only opens nine to five, Monday to Friday,’ he told Daily Mail Australia.

‘As a general rule, you need receipts and invoices to prove you spent the money, so gather together all your paperwork before you visit your accountant.’

This year, tax returns are also pre-filled in with employers, banks and private health funds providing details direct to the Australian Taxation Office.

Many income earners are no longer receiving group certificates in the mail or by email from their employer, with employers with 20 or more staff no longer required to provide a payment summary.

This means taxpayers filing a return will either have to obtain it via their accountant or by visiting the myGov website.

Mr Chapman said those working for small businesses may have to wait a little longer to be in a position to file their tax returns.

‘It can take until late July or early August for some slow-moving organisations to fully report data to the ATO but as we head to mid-July, most organisations have reported,’ he said.

From July 2020, smaller employers with less than 20 staff will no longer need to provide payment summaries to their staff.