A holiday on the ‘cut’ — as regulars call the canal network — is about unhurried tranquillity: slowing down to a pace where all the time in the world is just about enough to take in your countryside surroundings.

Boatees vie to let others pass through a lock before themselves; catching a glance which asks ‘Why not?’ is all the persuasion anybody needs to moor at a canal-side pub.

True, there are brawny duties at locks — mainly winding the sluice paddles open and shut with a heavy metal windlass. But steering a 60ft narrowboat is easier than most first-timers expect. Here is a pick of narrowboat holidays on canals around Britain.

The extraordinary Anderton Boat Lift in Anderton, Cheshire, which raises vessels 50ft from the River Weaver to the Trent and Mersey canal

The Cheshire Ring is a magnificent and varied circular route starting and ending at Anderton in Cheshire where the extraordinary Anderton Boat Lift raises vessels 50ft from the River Weaver to the Trent and Mersey canal. The route threads six different waterways passing through 92 locks.

Sleepy Peak District villages are a stark contrast with a day’s weaving through the heart of Manchester, passing the Old Trafford football stadium. 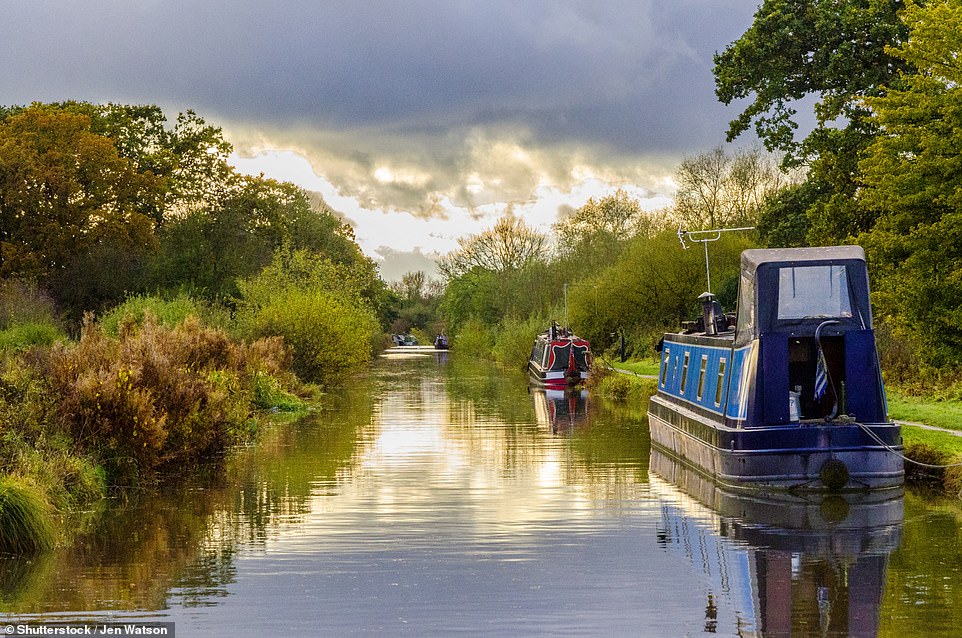 The Oxford Canal is the most popular leisure canal in Britain and a great place to spot charming villages, herons, grand estates and alluring pubs

The Oxford Canal is the most popular leisure canal in Britain, and it’s not hard to see why as it winds its Wind In The Willows-esque way through the countryside, passing charming villages, herons, grand estates and alluring pubs.

Take a four-day pootle from the boatyard at Napton in Warwickshire to Cropredy near Banbury in Oxfordshire and back.

From £859 for a three-night weekend aboard a six-sleeping ‘Regency Class’ boat with king-size beds and WiFi with Napton Narrowboats (01926 813644, napton-marina.co.uk). 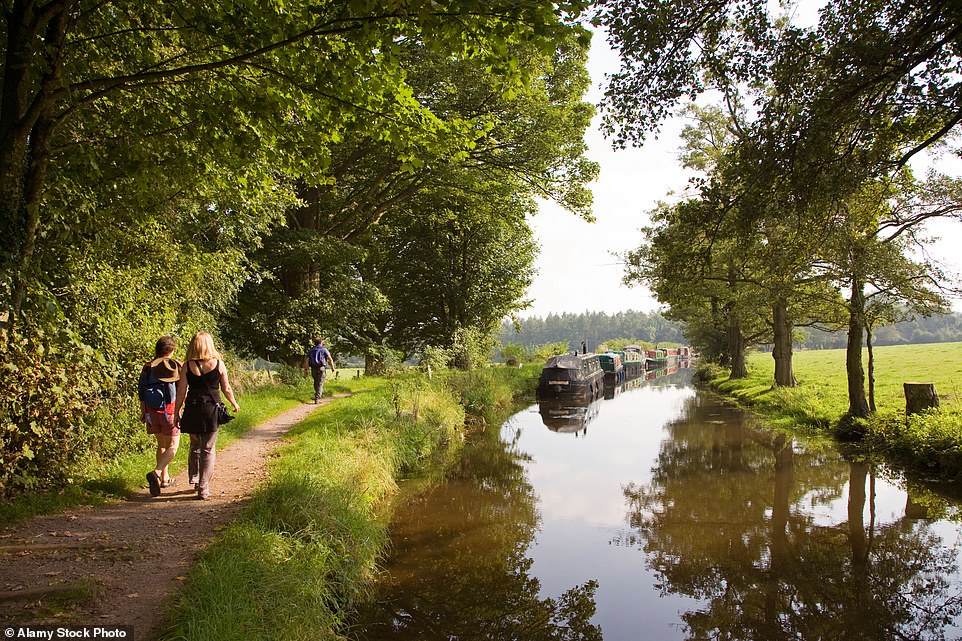 The only UK canal where electric (rather than diesel) narrowboats are for hire, is the 33 mile-long Monmouthshire and Brecon Canal — the ‘Mon & Brec’, pictured

The only UK canal where electric (rather than diesel) narrowboats are for hire, is the 33 mile-long Monmouthshire and Brecon Canal — the ‘Mon & Brec’ — between Brecon and Pontypool, which is not connected to the rest of the canal network.

You purr rather than putter through the Brecon Beacons National Park to a mountain backdrop.

Castle Narrowboats (01873 830001, castlenarrowboats.co.uk) offer a three-night cruise on a four-berth electric narrowboat from £672. 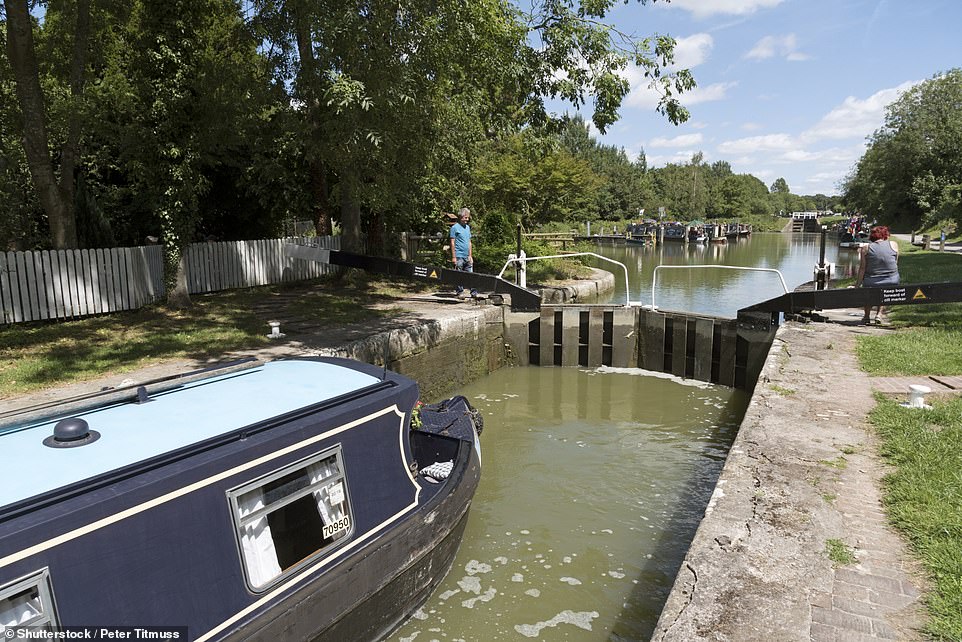 A boat passes through Caen Hill Flight — 16 locks packed together in a steep, straight line – in the Wiltshire town of Devizes

Even water’s unwillingness to flow up a 250ft hill was no problem for those industrious early 19th-century canal engineers determined to link Bristol, via the Avon, with Thames tributary the Kennet.

The Caen Hill Flight — 16 locks packed together in a steep, straight line — begins at the Wiltshire town of Devizes. After that, it is more of a dawdle through the enchanting Vale of Pewsey and along the edge of the myth-laden Savernake Forest, drifting to Hungerford and back. 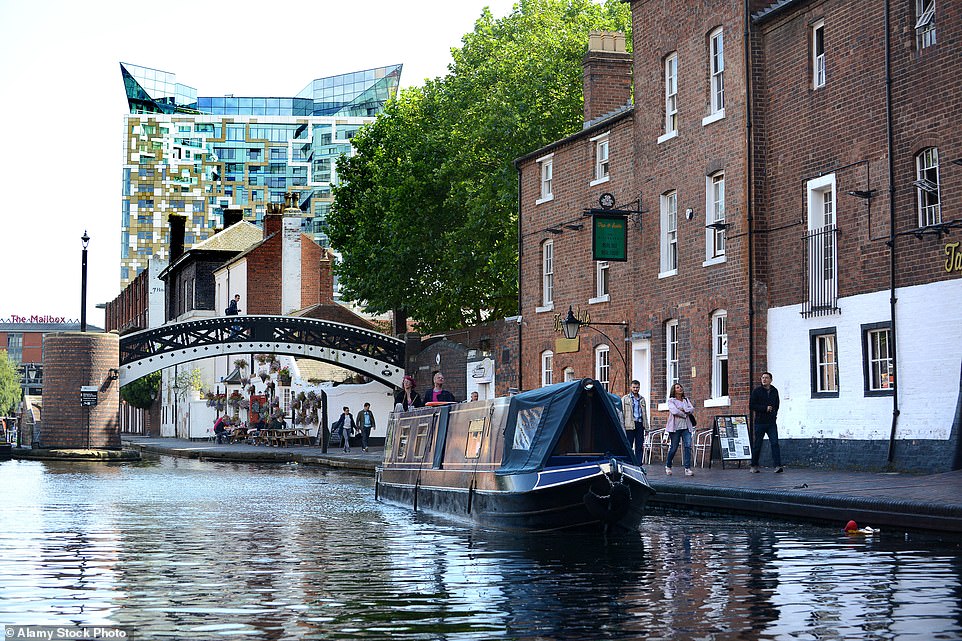 The Birmingham Canal winds past Broad Street in Birmingham City Centre. Birmingham has more miles of canals than Venice

Birmingham has more miles of canals than Venice — an oft-repeated fact. So how about viewing Brum puttering through the 35 miles of waterway?

Start at Tardebigge near Bromsgrove, then cruise into the heart of England’s canal network admiring the Victorian iron and timber lock machinery along the way.

STREAM IN THE SKY 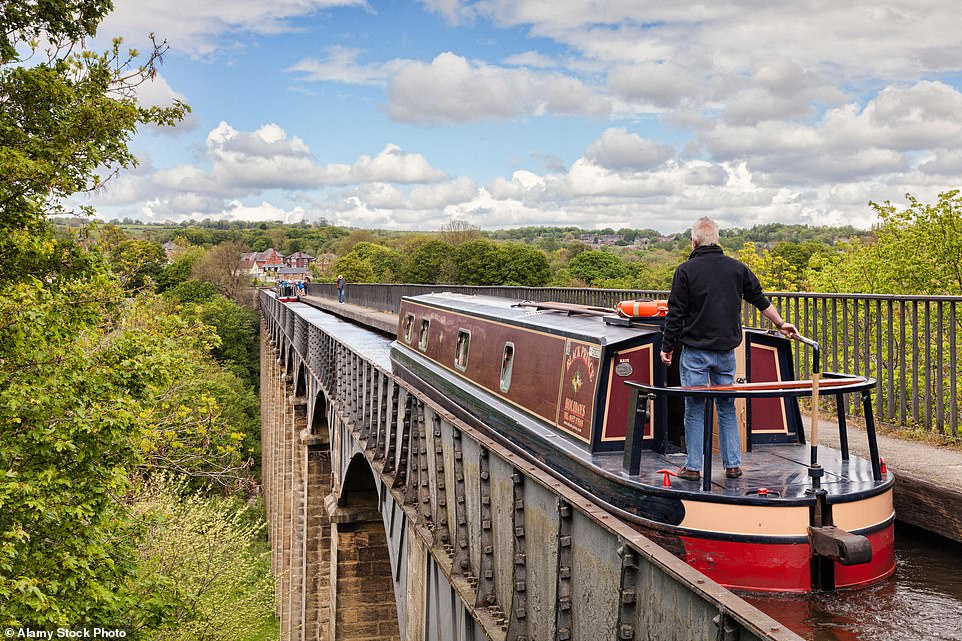 The Pontcysyllte aqueduct, completed in 1805, was designed by Thomas Telford. There are no side barriers on the Llangollen Canal

There are no side barriers on the Llangollen Canal, just a short metal lip between it and a 126ft plummet. 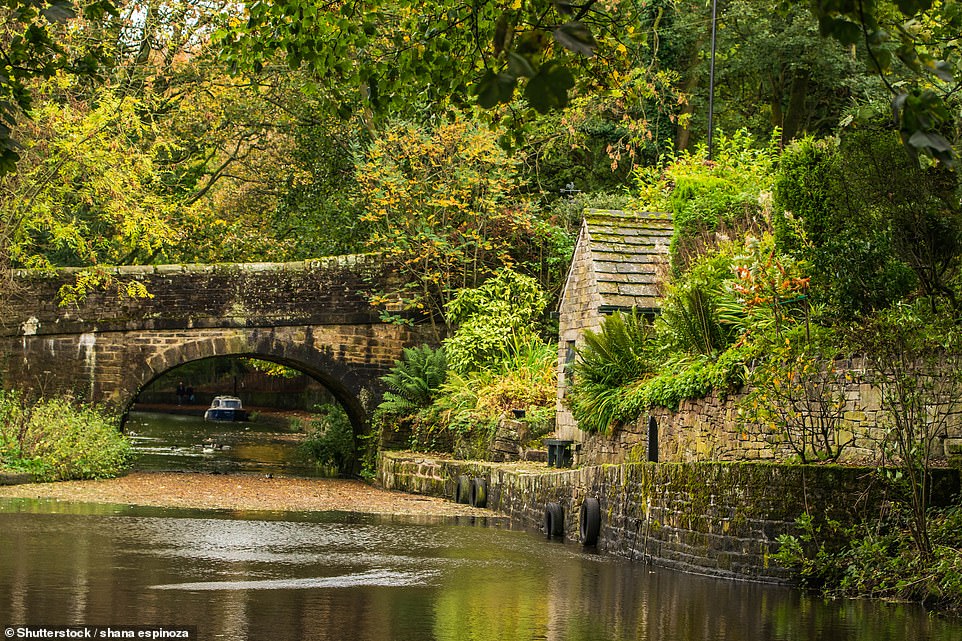 There are 97 locks to negotiate and a 645ft ascent on the Huddersfield Narrow, pictured

Rise to a War of the Roses challenge on this epic, one-way traverse of the backbone of England between Greater Manchester’s Ashton-under-Lyne and Sowerby Bridge in West Yorkshire.

There are 97 locks to negotiate and a 645ft ascent on the Huddersfield Narrow, the highest canal in Britain.

This is a week-long trip with wow factor that needs an active, experienced crew. From £1,105 aboard a four-berth boat for a week with Shire Cruisers (01422 832712, shirecruisers.co.uk). 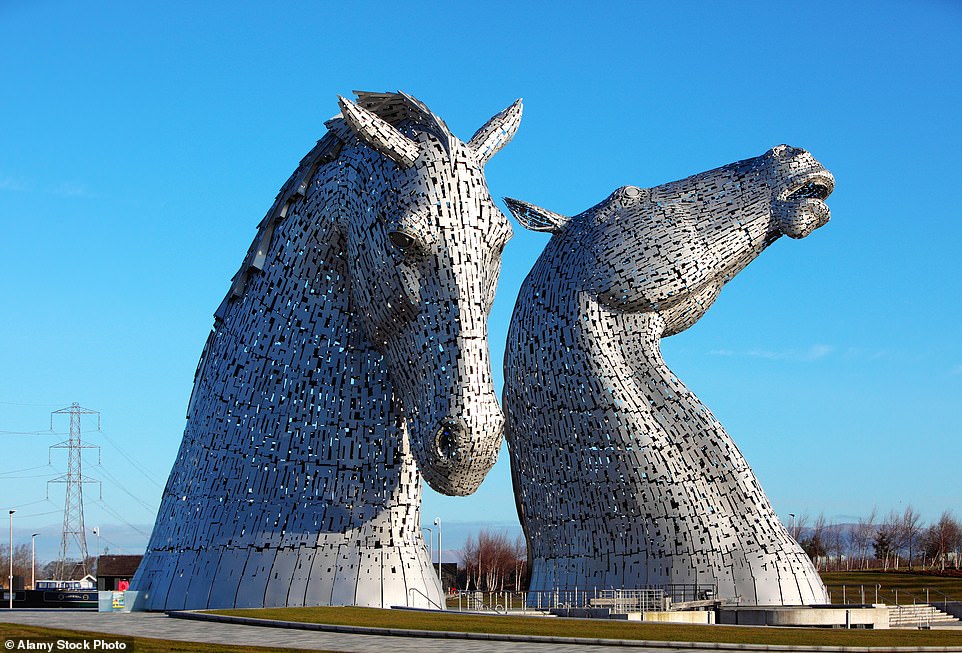 The Forth & Clyde and Union Canals link Glasgow with Edinburgh and flows through Falkirk, home to the famous Kelpies equine sculpture

Further information on canal holidays from Drifters (0344 984 0322, drifters.co.uk) and the Canal and River Trust (canalrivertrust.org.uk).

Potter through the Scottish Lowlands on the Forth & Clyde and Union Canals, which link Glasgow with Edinburgh.

The scenery is sprinkled with historic monuments such as Linlithgow Palace, birthplace of Mary Queen of Scots. You pass through two tunnels and cross a trio of magnificent aqueducts. An engineering highlight is the astonishing Falkirk Wheel, opened in 2002. This is the world’s first and only rotating boat lift, raising vessels by 80ft and connecting the two canals. Falkirk is also home to the famous Kelpies equine sculpture.

ABC Boat Hire (0330 333 0590, abcboathire.com) charge £1,399 for a week aboard the broad-beamed, eight-sleeping Alvechurch Sanderling, including a king-size bed.

Once a major trade and transport artery, nowadays the Briare loops through the middle of bucolic nowhere.

As soon as the opulent barge Renaissance had crossed the Loire on M. Eiffel’s prettily ornate aqueduct and headed north into the ravishing countryside, none of us passengers knew where we were. 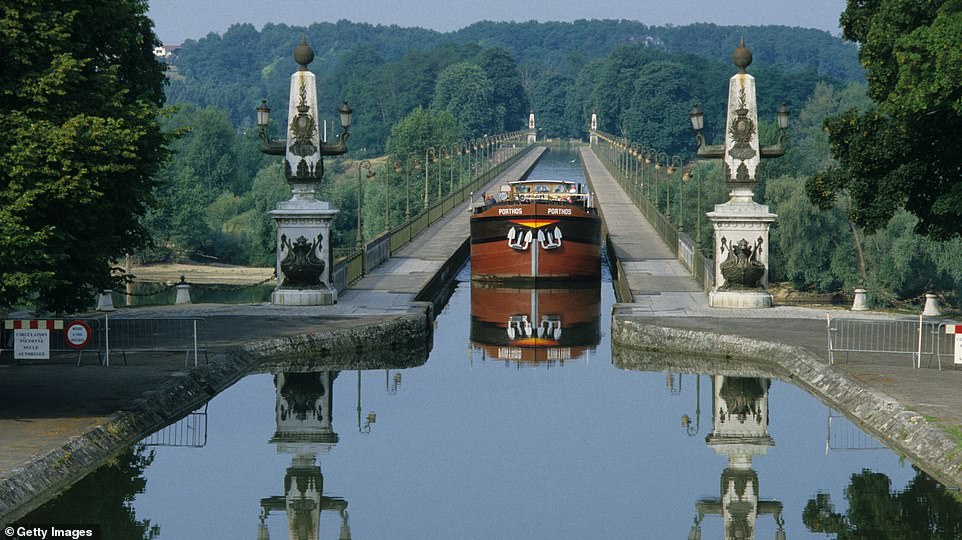 A barge makes its way along the Briare Canal, which was dug by 12,000 labourers between 1604 and 1640 to link the Upper Loire valley and the Seine 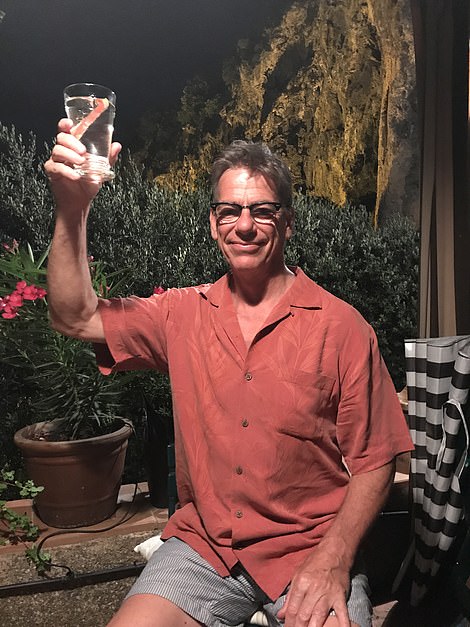 Salut! Jeremy Clarke toasts life on board a barge on the Briare Canal

According to the map placed in my lavish suite, however, by the end of the week we’d cruised about an inch, which was roughly the same distance I’d had to let out the belt of my jeans. I was also pampered to within an inch of my life. The 128 ft-long Renaissance was converted from a working barge into a sort of Royal Barge in 1960 and upgraded again in 2016 (wifi was excellent).

Looking after us four (maximum eight) passengers were five crew: a bearded young captain, a cherub-faced deckhand-cum-driver, an unfailingly modest and wonderful chef, an English rose hostess and a French housekeeper straight out of ’Allo’ ’Allo! called Mimi. They treated us like minor royalty, with Mimi actually curtsying to us.

Along the Briare’s 35-mile length, which took us a week, we passed another vessel roughly once every other day. Otherwise it was just us. Occasionally the pointy, ornate roof of a chateau could be glimpsed through the beech, sycamore and plane trees lining the towpath.

The muted thrum of the 250 horsepower diesel engine propelling us through the water was inaudible when you weren’t listening for it. Far louder was birdsong. Concealed among the unfurling leaves and creamy blossoms, blackbirds, thrushes and nightingales celebrated the green surge of early summer, while egrets and herons paced the shallows or stood around looking vacant as if on fentanyl.

Hawks made hay. Doting mother mallards and their chicks had to accelerate and alter course only slightly to evade the Renaissance’s mighty, but slow-moving, prow.

Each evening we tied up in, or near, some picturesquely dying village with an unpronounceable name. At one of these, a stupefyingly excellent jazz duo had driven three hours from Paris to perform for us during cocktail hour.

Once, when everyone else had gone to bed, I stood on the moonlit deck and listened to a nightingale’s singing clarified by the reflective surface of a lake.

The Renaissance has four air-conditioned suites below deck. Ours was ‘Moliere’ (French author of Tartuffe, or the Imposter), a light and spacious 265 cream-carpeted square feet with four large portholes just above the waterline.

Only one other of the remaining three suites was occupied. Mary and Bert hailed from San Francisco. All told, we shared six ruminative breakfasts, 11 four-course haute cuisine meals and numberless bottles of France’s most prestigious wines with this delightful American couple. (Once we’d agreed to keep President Trump off the conversational menu, all was well.) 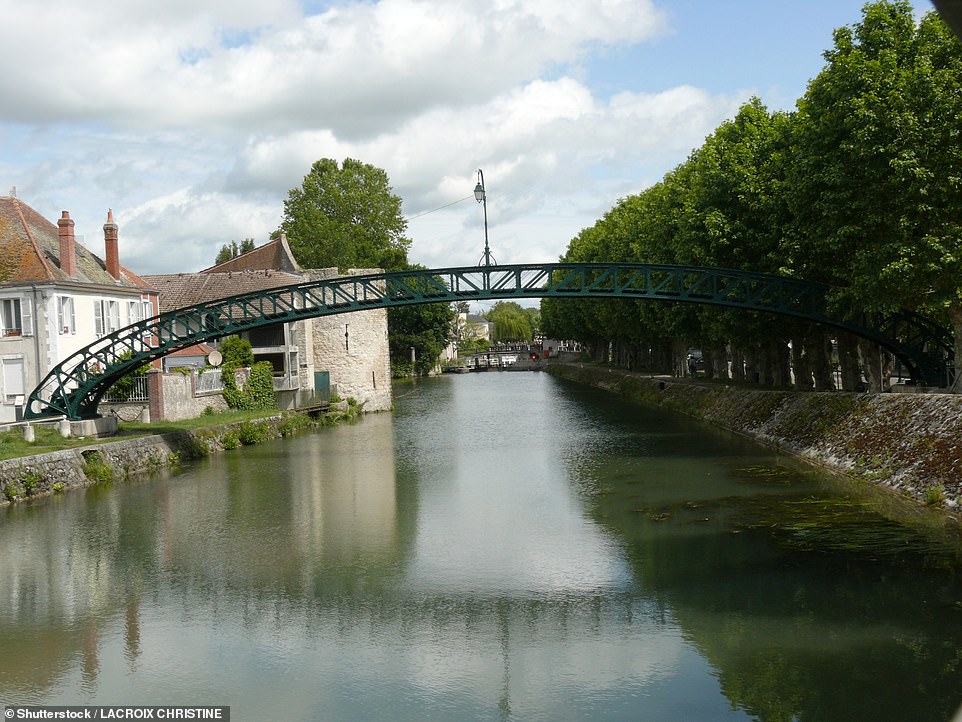 Along the Briare’s 35-mile length, Jeremy say they only passed another vessel roughly once every other day

Bert was a wine and rock music buff. At the first dinner together, he’d put on a CD. ‘Tina Turner all right for you?’ he asked us as we tucked into the starter. Fortunately, it was. Unfortunately, Bert had an aversion to goat’s cheese.

Mornings we walked our expanding waistlines along the towpath. Bicycles were available for the agile. Bert tried one, but afterwards was highly critical of the gear ratios.

Afternoons we climbed aboard the Mercedes for a side trip. Monday was a wine tasting at Sancerre led by none other than old M. Bourgeois, the winemaker, himself. M. Bourgeois: ‘Any questions?’ Bert: ‘Will you marry me?’ Tuesday was a tour of the famous pottery factory of Gien.

Who did we think were the prettiest, French girls or English girls, she wondered? Bert argued strenuously for French girls. The Anglophile Countess judged the contest about even.

Friday afternoon was spent touring the immense Royal Palace of Fontainebleau. In the courtyard, Russians were queuing to get married. After a week on the Renaissance, it felt odd to be in such regal surroundings without someone enquiring every five minutes whether we wanted anything.

So pampered had we become, we were overjoyed to return to that lovely watery spot (we knew not where exactly) where the Renaissance awaited us, and to dear Mimi, standing at the top of the gangplank with a silver tray of pre-dinner Cosmopolitans and a bobbed curtsy.

A six-night cruise aboard the Hotel Barge Renaissance starts at £4,750 pp, including all meals, wines, an open bar for the duration of the cruise, daily escorted excursions, and private transfers.