Barmaid at ‘haunted’ pub soaked as glass of wine moves itself

A landlady is convinced a Victorian ghost is haunting her pub after a glass was filmed moving by itself and soaking a barmaid with wine.

CCTV footage from The Queen pub in Mosborough, near Sheffield, shows manager Christine Thompson and two staff sharing some wine at the end of a shift.

In the video, barmaid Elaine Drabble can be seen taking a sip before setting her glass back on the table, several inches from the side. 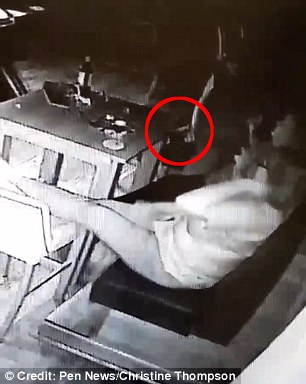 Then- inexplicably – the glass appears to to move towards the women, teetering on the edge of the table before tumbling into Elaine’s lap.

Landlady Christine, 61, said her colleague had just been describing a book she was reading about the horrors of the Nazi regime.

Christine claims that this topic of conversation may have ‘upset the ghost’.

She believes that a school mistress from Victorian times ‘haunts the pub’. 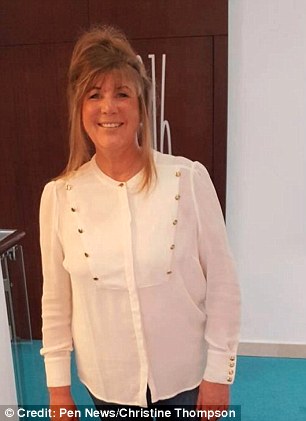 Landlady Christine, 61, believes the pub she manages is ‘haunted’ by a school mistress

She said: ‘I’ve got cameras all round the pub and that particular table does have one more or less just to one side, so it would give a real clear view.

‘I didn’t look at the CCTV until the following day, but I watched Elaine pick her glass up, take a sip of the wine and put the glass back on the table.

‘She set the glass back from the edge about four inches.

‘On the camera as you watch the footage, you can see her glass starts to move.

‘I said to Elaine, ‘I think the spirit didn’t like the subject you were talking about’.’

Christine claims the ghost may be a school mistress from the 1800’s when the pub’s function room was used as a classroom while a new school was built nearby.

She says the teacher was spotted by builders in 1998, when the function room was extended.

The Queen pub in Mosborough, near Sheffield has been surrounded by ‘haunting’ rumours

‘That particular morning,’ she said, ‘two guys were upstairs with massive hammers hitting the stone walls to knock a doorway through.

‘Next thing I know they came flying down the staircase – two burly builders in their 40’s with tattoos and massive shoulders on them – not the sort of guys you would think scare very easily- jumped into the bar, their faces were ashen, and they looked at me and said ”tell us you haven’t got a ghost”. ‘

So I started smiling and said ‘rumour is it, we have – but I’ve never seen it’.

They said ‘well we have, she’s just walked through the wall’.’

Christine describes the ‘spectre’ as a woman in a long black skirt with lace-up boots. Christine has a historical photo showing two mistresses from Mosborough Endowed School in similar attire. 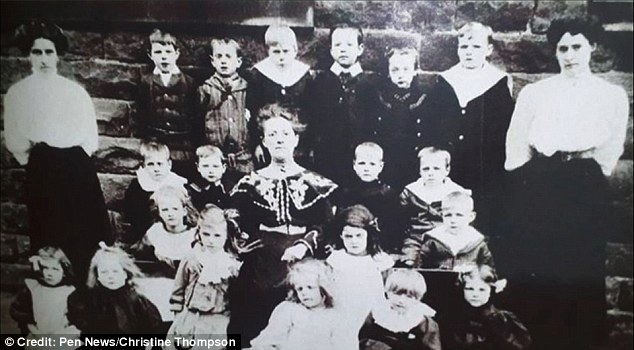 The pub’s function room was used as a classroom while a new school was built nearby in the 1800s.  The ‘school mistress ghost’ wears similar clothes to the two women in this photo

Another patron who visited the pub told Christine that she’d encountered the ‘school mistress ghost’ while working at The Queen two decades before.

‘She said, ‘the woman I saw in the kitchen, she had a long black skirt on down to her calves, and black lace up boots’.

‘It was exactly the same description,’ said Christine. The landlady also claims that a photo taken in her cellars by a local history group captures the faces of four ghosts.

‘Honestly,’ she said, ‘I can see four faces in this photograph – as clear as day. ‘To me they’ve got to be ghosts. They can’t be anything else, because there was nothing down there [when they were taken] – just us.’