Barnaby Joyce has revealed why he has refused to support proposed new abortion laws – despite his own daughter slamming his stance.

The former deputy prime minister explained it was not morality that was driving his opposition to the controversial New South Wales Government bill.

‘My issue is this legislation doesn’t clearly differentiate when there’s clearly two people – when a person can be viably born,’ he said on Sunrise on Monday morning.

Mr Joyce has faced backlash from within his party after speaking out against the proposed laws.

He threatened to quit the Nationals if four party members had stepped forward urging for his resignation, but on Monday revealed no colleagues had phoned him to voice their disapproval.

One of his harshest critics has been his youngest daughter, who took to social media to slam her father over his stance on the proposed abortion law.

The daughter, who is one of four girls Mr Joyce shares with ex-wife Natalie, shared an article written by SBS regarding her father’s involvement in the anti-abortion rally.

‘Once again I do not support you,’ she captioned the screen grab.

She was clear in where she stood on the matter after her father addressed the rally asking people to ‘use logic’ when it came to the potential new law.

Barnaby Joyce’s four daughters have a close bond with their mother, but less so with their father

‘I am not here to try and espouse a religion. I’m not here saying I’m some saint. I’m here because I’m trying to argue to those people on logic,’ Mr Joyce said.

He also used his social media platform to further share his opinions. 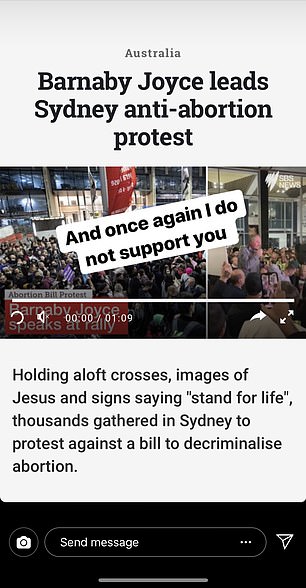 ‘I have a real problem with a law that allows a perfectly healthy full-term baby to be aborted because two doctors say it’s okay,’ he wrote.

‘Yet NSW’s legislation allows exactly this.’

Pro-life activists rallied in Macquarie Street last week chanting the phrases ‘abort this bill’ and ‘love them both’ as members of the upper house deliberated in the building above.

The Reproductive Healthcare Reform Bill 2019, a private members bill, will be introduced to NSW parliament this week by independent MP Alex Greenwich.

It would allow for terminations on request for women up to 22 weeks of pregnancy.

After this time, terminations would be lawful if two doctors believe it should be performed in light of future physical, social and psychological circumstances.

Chantal Czeczotko, who is 26 weeks pregnant, broadcast the sound of her unborn child’s heartbeat to provide ‘evidence’ as to why she believed the bill shouldn’t be passed.

Social media users were quick to point out the hypocrisy of Mr Joyce’s moral stance on the issue.

‘I think he’s done his dash commenting on any issues concerned with morality,’ one person wrote. 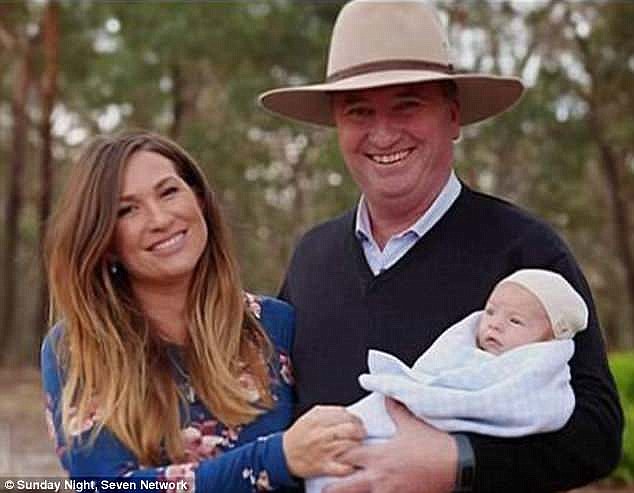 WHAT DOES THE PROPOSED BILL PUT FORWARD?

The bill states that a woman does not commit an offence if she procures a termination within the framework provided in the legislation and would amend the offences listed under act.

It would allow for terminations on request for women up to 22 weeks of pregnancy.

After this time, terminations would be lawful if two doctors believe it should be performed in light of future physical, social and psychological circumstances.

The bill would also create a new criminal offence under the Crimes Act for those who assist in terminations who are not authorised to do so – attracting a maximum penalty of seven years imprisonment.

‘This is a man who technically lives in ”sin” after breaking one of the commandments – adultery,’ another added.

Mr Joyce gained national notoriety when it was uncovered he was having an affair with his staffer Vikki Campion.

As for his relationship with his four daughters from his previous marriage, Mr Joyce acknowledges it will require a bit of time and effort to build bridges.

He previously told the Today Show he knew he ‘made mistakes’ with his family.

‘With hindsight you can look back and see the mistakes you made and how you could’ve been a better person.

‘I know the mistakes I’ve made, but I don’t just want to dwell on that because I think that’s really limiting and egotistical.

‘When you talk about repairing the relationship, that’s something I have to do, and I have to do over a long period of time,’ he said. 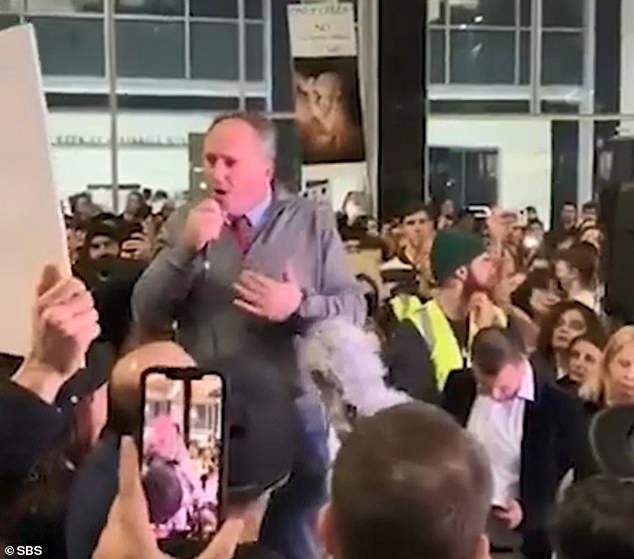