BARNEY CALMAN: Is it possible the Queen simply died of old age as on just 2% of death certificates?

What does it mean to die of old age? It’s a familiar phrase, and yet, when it emerged that it had been officially recorded as the sole cause of death on the Queen’s death certificate, many expressed surprise.

‘Old age seems to me just a number, not a medical term,’ suggested one.

‘Surely there’s a medical term used to explain the failure of a biological organ?’ wrote another.

American celebrity website TMZ said the certificate was ‘simple, perhaps oddly so’. And it could have a point. It was also the cause of death given for Prince Philip, who died in April last year at the age of 99. But although it is a legally acceptable explanation for death under specific circumstances, it is an unusual one.

Death certificates are part of the public record, alongside birth and marriage certificates. This is why the Queen’s was made public. They are required before the family can make funeral plans and settle the deceased’s estate. And they are a vital tool used by government bodies to track causes of death across the country.

Death certificates must be completed by the doctor who attended to the deceased ‘during their last illness’, and they are responsible for determining the cause of death. In the case of the late monarch, who died at Balmoral on September 8 at 3.10pm, this was done by Dr Douglas Glass, who has worked for the Royal Family for more than three decades. 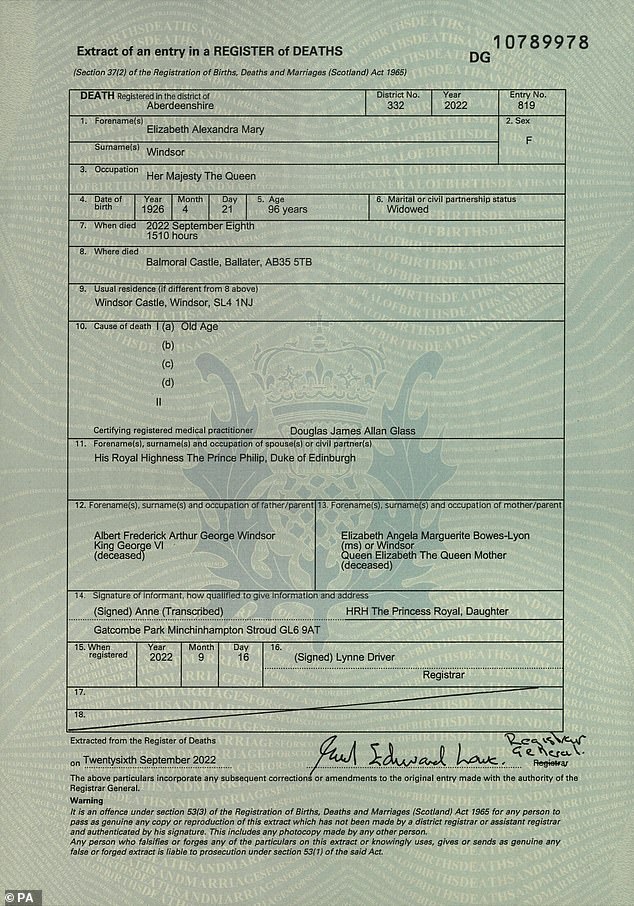 Death certificates routinely list both the direct cause of death, such as pneumonia or sepsis, and what led to that condition or event developing. They may also list other conditions that might have contributed to that person dying – for instance, if they suffered an illness such as dementia or diabetes that left them vulnerable.

The importance of each of these factors, and the order in which they are listed, is up to the medic writing the document. The certificate must be signed off by a local medical examiner – an expert trained in the legal and clinical elements of the process.

Government guidance says ‘old age’, ‘senility’ or ‘frailty of old age’ can be given as sole cause of death only if the doctor who writes the certificate has cared for the deceased over a long period and observed a gradual decline in health that couldn’t be attributed to a disease or injury.

However, one GP, who asked to remain anonymous, said: ‘If old age is given as the only explanation these days, a doctor writing such a certificate might expect a phone call from the medical examiner or the register office at the town hall, requiring further detail.’

If a resolution can’t be found, this situation might trigger a referral to the local coroner – usually a doctor, lawyer or both – for an inquest.

According to the Office for National Statistics (ONS), in August, the most recent month on record, there were 44,381 deaths in England and 2,931 in Wales.

Dementia was the most common cause, accounting for just over 11 per cent of fatalities, followed by heart disease, lung cancer and stroke. The ONS routinely publish the top ten causes of death, but ‘old age’ is uncommon enough not to make the list. Research suggests it may be recorded as the sole cause in about two per cent of deaths – so it would be fair to say the Queen’s certificate is unusual, but not so much so it would appear suspicious.

On the other hand, the GP added: ‘It would be surprising for a woman in her late 90s not to be suffering from at least one underlying condition that would warrant listing as a contributory factor.’

However, Professor David Oliver, a consultant in geriatric medicine, said: ‘There are circumstances where you might just write “old age” or probably more often “frailty of old age”. When we talk about someone becoming frail, we mean there has been a steady decline in energy and mobility.

‘It’s been clear that the Queen had slowed up considerably over the past year – she was cutting down on engagements and walked with a stick.

‘Also, it’s not uncommon for older people to make it clear to their family or GP that they do not want to die in hospital, and you can imagine the Queen saying that.

‘Although treatment, such as pain relief, would still be given if it was required, it might mean the doctor caring for them would avoid referring them for tests and investigations.’ 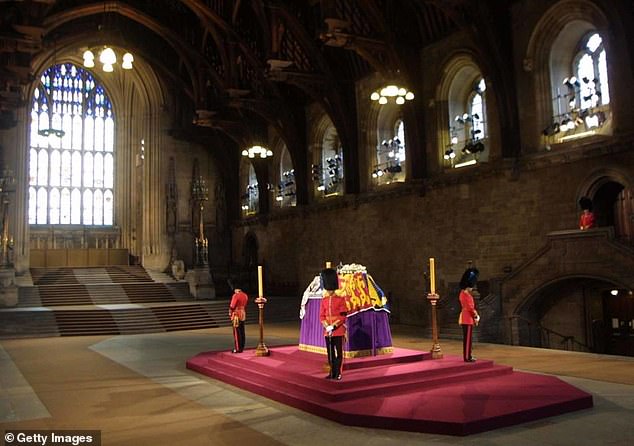 The coffin of Queen Elizabeth, the Queen Mother as it lied in state at Westminster Hall in central London April 9

It is possible to put such a wish into writing, as part of a patient’s Advance Decision to Refuse Treatment, or ADRT, or in a living will – although it is not known if the Queen had done so.

In some instances, family members may prefer ‘old age’ on a death certificate instead of a list of ailments that may or may not have contributed to the death. Indeed, there was widespread criticism during the Covid pandemic that the virus was listed as primary cause of death when, in fact, the deceased had been very frail for some time.

‘But if you’d seen them slow down gradually, and they’d had no other diagnoses or problems, then it would be fair.

‘What frailty really means is that a person has nothing in reserve. It means the smallest thing, such as a minor infection or bug that might be inconsequential to most of us, could tip them over the edge.

‘All deaths are triggered by something that causes various organs and the heart to stop working, leading to death. But cases involving an elderly, frail person, where that trigger simply wasn’t clear, you might as well just say that person died of old age.

‘The truly remarkable thing about the Queen is that she stayed so healthy for so long.’