EU negotiator Michel Barnier finally conceded he would have to offer Britain a unique deal on Brexit today in the first hint of a climb down from Brussels.

In remarks that sent the pound soaring up against the euro and the dollar, Mr Barnier promised a ‘partnership with Britain such as has never been with any other third country’.

Mr Barnier has repeatedly insisted Britain must choose from an existing model used by either Norway or Canada.

The Brussels chief still insists Britain cannot have an ‘a la carte’ choice of benefits from the EU single market.

The intervention is a significant boost for Theresa May who has spent the summer trying to win support in EU capitals for her Brexit blueprint.

Her Chequers plan – which triggered the resignation of Boris Johnson and David Davis in July – had been rejected in previous statements by EU leaders.

Mr Barnier told reporters in Berlin: ‘We are prepared to offer Britain a partnership such as there never has been with any other third country.

‘We respect Britain’s red lines scrupulously. In return, they must respect what we are.

In other developments today, Dominic Raab admitted that a Brexit deal could be delayed until after the October deadline – amid fears the UK could crash out without an agreement.

The new Brexit Secretary insisted that ministers are ‘ambitious’ and still optimistic a deal can be done with Brussels.

But he said that finalising the agreement could ‘creep beyond’ the EU summit on October 18 and 19, which has been the deadline for the talks.

His remarks, made in front of the House of Lords select committee on the EU, is the first time a minister involved in talks has publicly admitted the deadline could slip.

Mr Raab made the admission as he called for the EU to match the UK’s energy in coming up with a deal for the crunch talks. 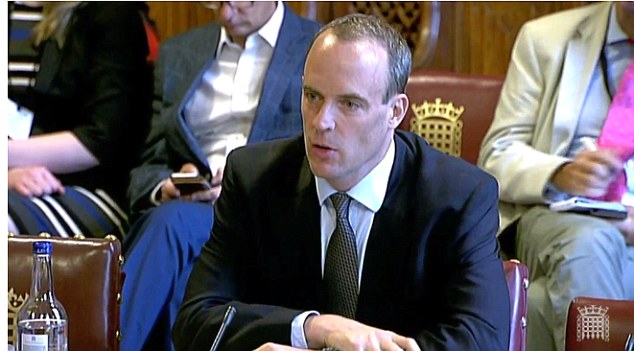 He said: ‘It’s important as we enter the final phase of the negotiations to the lead up to the October council and the possibility that it may creep beyond that, we want to see some renewed energy.

What is in Theresa May’s Brexit blueprint?

These are some of the key features of the Chequers plan being pushed by the UK government:

‘We are bringing the ambition and substance of our white paper on our future relationship, and also some pragmatism to go the extra mile to get the deal that I think is in both sides interests.

‘We need that to be matched. Obviously.’

He said that a deal is 80 per cent done and that ‘the contours of an agreement is there’.

The chairman of the committee, Lord Boswell of Aynho, quizzed the minister on how delayed a deal may be.

He said: ‘You have indicated it could go a bit further than that – can we ask you to go a it further.’

Mr Raab said: ‘My starting point is March next year when we are leaving the EU and I work back from there.

‘We are aiming for the October council but there is some measure of leeway.’

His words are a shift in tone from the Government, which yesterday was still stressing that it is working towards the October deadline.

The PM’s spokesman said yesterday: ‘The PM has already addressed this. She has confirmed we are working to the October deadline and that remains the case.

Mr Raab also played down reports in The Guardian today suggesting that the EU’s lead Brexit negotiator Michel Barnier has failed to make himself available for face to face talks with him.

The newspaper reported that despite his assertion that he is available ’24/7′ for talks, Mr Raab had been left frustrated at his lack of meetings with Mr Barnier.

But the UK ministers poured cold water on the report today – insisting he has met with Mr Barnier several times and the two have a close working relationship. 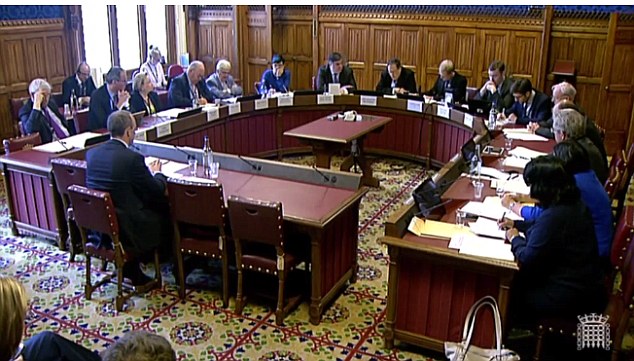 His remarks, made in front of the House of Lords select committee on the EU, is the first time a minster has publicly admitted the deadline could slip

Asked about it today, Mr Raab said: ‘In relation to whatever tittle tattle will appear in whatever newspaper, I’m in Brussels tomorrow evening for a long substantive meeting with Mr Barnier on Friday.

‘On a one to one level, we have established a good professional personal rapport. 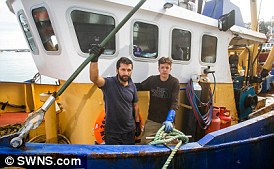 Fishermen Nathan and Callum Clark were among those attacked by the French this week. They said it was ‘very scary’ when French crews through rocks and pieces of metal at them

British fishermen have vowed to return to English Channel later this week despite so-called ‘scallop wars’ being fought with the French.

A sea battle blew up off the coast of France this week after Normandy crews accused British trawlers of ‘scallop pillaging’ in a row over access to the Seine Bay.

But British fisherman insisted they have done nothing wrong and will return to fish in the area at the end of this week.

‘My nephew Callum was petrified – it’s his first year on the boats and he was scared for his life. We had to get him in the boathouse to get him under cover and away from the objects being thrown.’

But despite safety fears, the boat will return to the area later this week, with Mr Clark insisting: ‘It won’t stop us. We’ll take a few days off but we’ll go back out there again.’

‘I would say we have a good working relationship and the beginnings of a good personal relationship….and these things matter.’

Mr Raab is making his first appearance in front of the Lords select committee since being promoted to Brexit Secretary in July after David Davis’ shock resignation.

Mr Davis quit the role in protest at Theresa May’s Chequers proposal – a compromise deal which would mean the UK sticks to EU rules for goods but leaves the  single market and customs union.

The proposal sparked outcry from Brexiteers and Tory activists who warned it would leave the UK stuck half inside the Brussels bloc  and hamper the country’s ability to strike free trade deals globally.

And the EU also greeted the plan with scepticism – and it emerged yesterday that Mr  Barnier threatened to boycott Brexit talks if Mrs May insisted on basing a deal on her Chequers plans.

Mr Barnier furiously told officials the controversial proposals could save British businesses billions of pounds a year if they were able to trade in Europe free from many EU regulations.

Speaking in front of the select committee today, Mr Raab was quizzed on the thorny issue of the Irish border, which has threatened to derail the talks.

The EU wants a ‘backstop’ which would see Northern Ireland effectively stay in the single market and customs union if no other deal can be done.

The Brexit Secretary insisted that it ‘is not on the cards’ as it would create a border in the Irish Sea, and he stressed that any backstop for Northern Ireland must be ‘temporary’ and ‘short’.

He added: ‘We have been very clear that in the event of a no deal scenario we would not return to a hard border or extra infrastructure at the border.’

He said: ‘The Prime Minister has been clear that the EU proposals were unacceptable. I don’t have the solution to give you yet.

‘Michel Barnier has also confirmed he is open to new solutions on the backstop and he has said the backstop we eventually agree on is not necessarily going to be the one the Commission came up with.

‘He has acknowledged the position could be amended or improved. 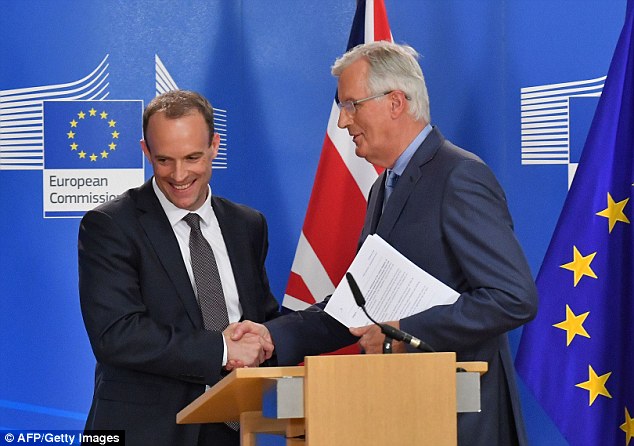 Dominic Raab (pictured with the EU’s chief Brexit negotiator Michel Barnier in Brussels in July, played down reports that Mr Barnier has been snubbing his requests for meetings and said they have a close working relationship

‘What I can say is we’re both committed to a solution and there is a lot of interesting, innovative technical work to make sure we resolve it.’

He also suggested that the £40bn Brexit divorce bill could be cut if they UK crashes out without a deal.

He said: ‘Her majesty’s Government always pays its dues. Equally, the financial settlement as it is calibrated in the Withdrawal Agreement details a whole range of considerations – not just the strict legal obligations.

‘If we left with no deal then not only would there be a question about the scale of those financial obligations but also the timing.’

He also insisted that the Chequers plan has won support in Europe, telling the peers: ‘There are still some hard rounds to do on the future relationship for sure.

‘But I actually think it has had a reasonably positive landing.’