Baroness Lawrence has said it is ‘unbelievable’ that inquiries into the aftermath of her son Stephen’s murder are still ongoing after nearly 26 years – as she insisted the Met is still ‘in some respects’ institutionally racist.

A public inquiry into undercover policing, which has been beset by delays, is looking at claims that grieving families were spied on as they campaigned for justice, including the Lawrences.

Giving evidence to the Home Affairs Select Committee today, Baroness Lawrence accused the Metropolitan Police of trying to avoid giving the ‘true facts’ of what undercover officers did to the inquiry.

She said: ‘The undercover inquiry that’s happening now, the police are doing all that they can not to give the true facts of what happened.’

The peer also claimed that chairman Sir John Mitting has not appreciated the lengths an officer would go to in order to keep their activity secret.

‘I don’t think he understands the level of what a police officer would go through in order to deny and to secret whatever it is that they’re doing,’ she said.

‘This has been going on for three years now and he still hasn’t taken evidence. They’re still going through the paperwork. 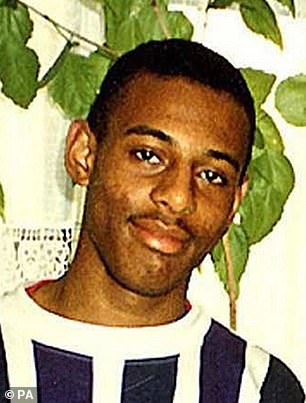 Stephen was murdered by a gang of up to six racist attackers as he waited for a bus with his friend Duwayne Brooks in Eltham, south-east London, in 1993

‘For me 25 years, coming up to 26 years, and this to be still going on, is unbelievable that any family should have to go through this.’

When asked if she believes that police in England and Wales are institutionally racist now, Baroness Lawrence said: ‘I think in some respects that they still are.

‘Nobody wants to be labelled as that, but at the same time it’s undercover, it still exists.’

She told the committee that officers on the beat cannot expect young people to show them respect if they do not give them the same consideration, and claimed that they are too heavy-handed with black suspects.

‘I still feel that police on the beat don’t get it. I would drive past, walk past, and I see one individual, a young black man, he’d probably have about six officers around him. Do you need that intimidation, do you need that amount of officers? No you don’t.’

Baroness Lawrence was called to give evidence on progress in the 20 years since the publication of the Macpherson report into the aftermath of her son’s death.

Stephen was murdered by a gang of up to six racist attackers as he waited for a bus with his friend Duwayne Brooks in Eltham, south-east London, in 1993.

The bungled original investigation into his death sparked outrage amid claims of racism and corruption in the police.

A public inquiry was set up four years later and in 1999 the damning Macpherson report was published, accusing Scotland Yard of institutional racism.