Bartender admits she ‘ruined a wedding’ by quitting

A bartender has admitted she ‘ruined a wedding’ after she quit during the reception and left the bar unattended because guests were rude.

Explaining the situation she revealed she was the only bartender for a wedding party of 200 guests who ‘sexually harassed her’ and verbally abused her over the ‘slow service’, all while her manager left at 8pm.

She revealed she ended up having a ‘panic attack’ so she decided to quit her job leaving at 11:30pm and spent the evening ‘drinking wine and watching TV’-  even though the bar was supposed to be open until 2am.

Many commenters claimed they would have done the same thing and she was right to leave because it was ‘an unsafe’ environment.’

Meanwhile, others said they ‘feel sorry for the bride and groom’ and she shouldn’t have left without telling management and the other staff members.

She wrote: ‘Took on a weekend part-time bar job, needs must. I’m a single mum to teen children who are fine to be left and I have a 9-5 in the week, so it made sense.

‘I’ve been working there two months now. It’s a large hotel that has wedding functions. I actually loved it at first, the buzz, having a crack and making conversation with people etc. Some of the other bar staff were similar age to me (late 30s) which was lovely as well. 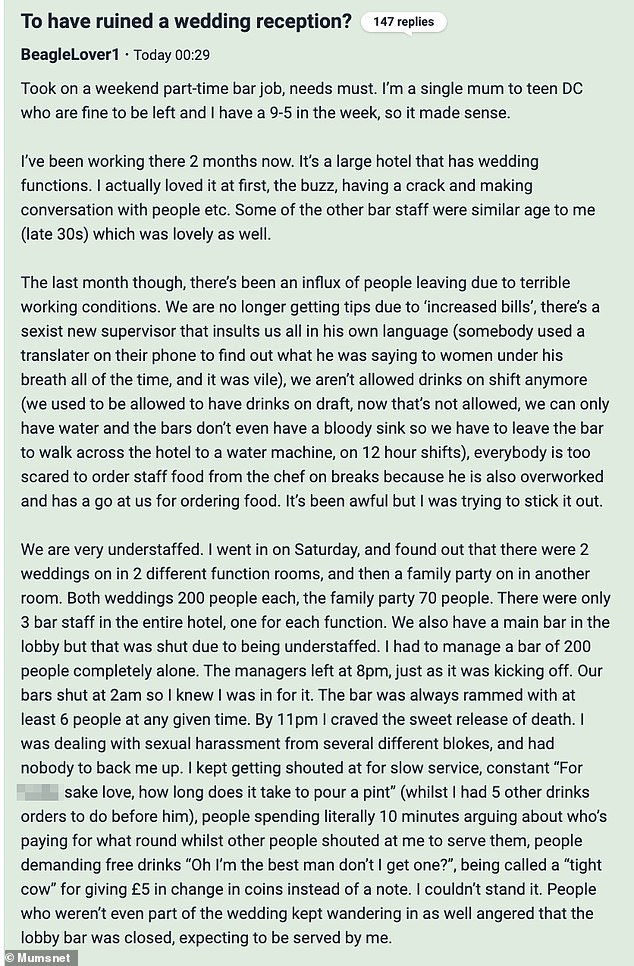 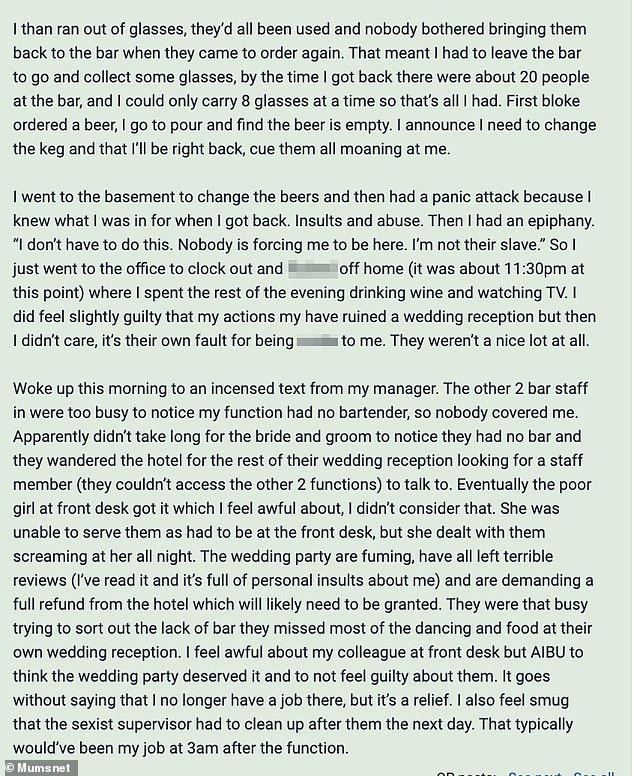 ‘The last month though, there’s been an influx of people leaving due to terrible working conditions. We are no longer getting tips due to “increased bills”.

She added that the new supervisor is ‘sexist’, they have to walk across the hotel to get a drink of water on shift and the chef snaps when anyone asks for food on their breaks.

‘It’s been awful but I was trying to stick it out,’ she explained.

‘We are very understaffed. I went in on Saturday, and found out that there were two weddings on in two different function rooms, and then a family party on in another room.

‘Both weddings 200 people each, the family party 70 people. There were only three bar staff in the entire hotel, one for each function. We also have a main bar in the lobby but that was shut due to being understaffed.

She continued: ‘I had to manage a bar of 200 people completely alone. The managers left at 8pm, just as it was kicking off. Our bars shut at 2am so I knew I was in for it. The bar was always rammed with at least 6 people at any given time. By 11pm I craved the sweet release of death. I was dealing with sexual harassment from several different blokes, and had nobody to back me up.

‘I kept getting shouted at for slow service, constant “For f*** sake love, how long does it take to pour a pint” (whilst I had 5 other drinks orders to do before him), people spending literally 10 minutes arguing about who’s paying for what round whilst other people shouted at me to serve them, people demanding free drinks “Oh I’m the best man don’t I get one?”, being called a “tight cow” for giving £5 in change in coins instead of a note.

‘I couldn’t stand it. People who weren’t even part of the wedding kept wandering in as well angered that the lobby bar was closed, expecting to be served by me.

‘I than ran out of glasses, they’d all been used and nobody bothered bringing them back to the bar when they came to order again. That meant I had to leave the bar to go and collect some glasses, by the time I got back there were about 20 people at the bar, and I could only carry 8 glasses at a time so that’s all I had. First bloke ordered a beer, I go to pour and find the beer is empty. I announce I need to change the keg and that I’ll be right back, cue them all moaning at me. 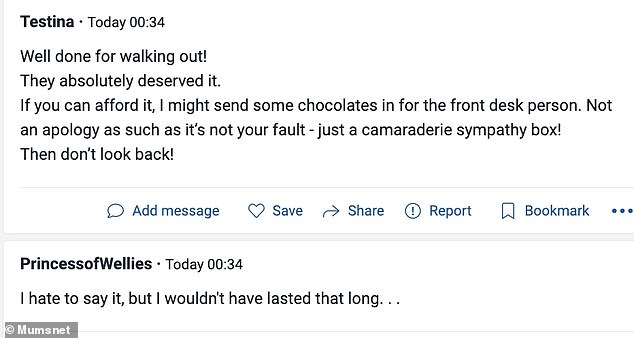 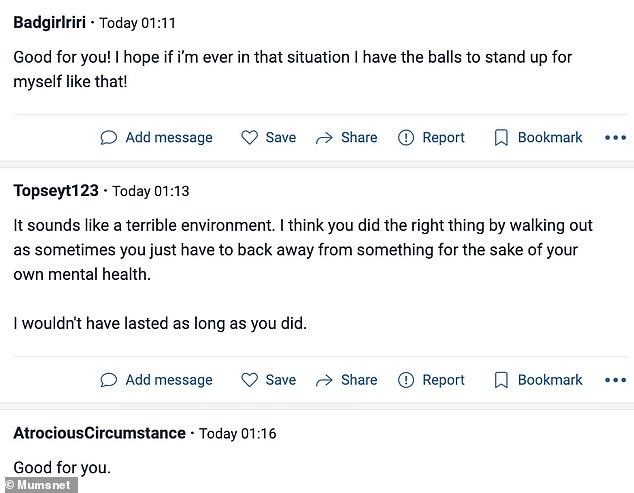 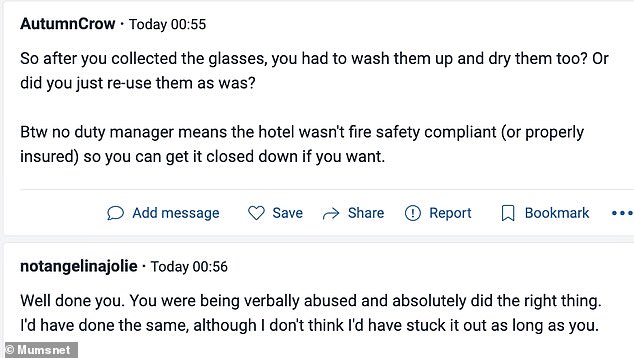 ‘I went to the basement to change the beers and then had a panic attack because I knew what I was in for when I got back. Insults and abuse. Then I had an epiphany. “I don’t have to do this. Nobody is forcing me to be here. I’m not their slave.”

She went on: ‘So I just went to the office to clock out and f***ed off home (it was about 11:30pm at this point) where I spent the rest of the evening drinking wine and watching TV. I did feel slightly guilty that my actions my have ruined a wedding reception but then I didn’t care, it’s their own fault for being c**** to me. They weren’t a nice lot at all.

‘Woke up this morning to an incensed text from my manager. The other two bar staff in were too busy to notice my function had no bartender, so nobody covered me.

‘Apparently didn’t take long for the bride and groom to notice they had no bar and they wandered the hotel for the rest of their wedding reception looking for a staff member (they couldn’t access the other two functions) to talk to.

‘Eventually the poor girl at front desk got it which I feel awful about, I didn’t consider that. She was unable to serve them as had to be at the front desk, but she dealt with them screaming at her all night.

‘The wedding party are fuming, have all left terrible reviews (I’ve read it and it’s full of personal insults about me) and are demanding a full refund from the hotel which will likely need to be granted.

‘They were that busy trying to sort out the lack of bar they missed most of the dancing and food at their own wedding reception. I feel awful about my colleague at front desk but AIBU to think the wedding party deserved it and to not feel guilty about them.

‘It goes without saying that I no longer have a job there, but it’s a relief. I also feel smug that the sexist supervisor had to clean up after them the next day. That typically would’ve been my job at 3am after the function.’

Many congratulated the woman for leaving her job and agreed she done the right thing. 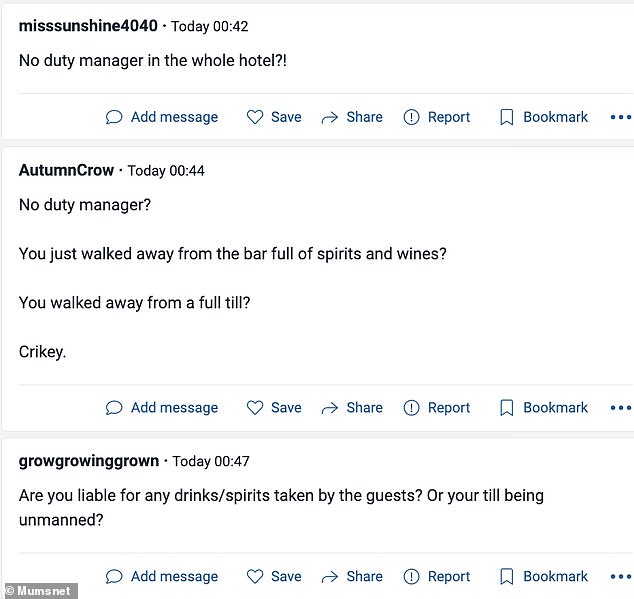 One person wrote: ‘Well done for walking out! They absolutely deserved it.

‘If you can afford it, I might send some chocolates in for the front desk person. Not an apology as such as it’s not your fault – just a camaraderie sympathy box! Then don’t look back!’

Another said: ‘You were being harassed, bullied and verbally abused. I don’t blame you for removing yourself from the situation at all.

While a third wrote: ‘Well done you. You were being verbally abused and absolutely did the right thing. I’d have done the same, although I don’t think I’d have stuck it out as long as you.’

Others blamed the managers for the shambles as they left while the parties were understaffed.

One person said: ‘That’s awful. I bet you were all on minimum wage dealing with all that too. You aren’t a manager, a glass collector or wedding coordinator. Someone else should have been there to deal with that.

‘Of course they’re going to lose staff. Hospitality is dreadful for how it treats it’s staff. Yes it was a shame the wedding suffered and the girl on reception got the flack all night, but all that is due to dreadful managers.’

Another wrote: ‘The actual people at fault are your managers. If I was waiting for ages at an understaffed bar with no beer and no glasses I’d be cheesed off. Not rude because I’ve been where you are.

‘But people are rude and your managers knew what they were doing. It certainly wasn’t the bride’s fault and doubtless she paid a lot for one day she wanted to be good.

‘Lone working when there’s alcohol is a bloody stupid idea and no manager should have left at that point. Walk out by all means but the poor bride as well as you.’

While another wrote: ‘The managers should not have left obviously if there was a staff shortage. They should have stayed on to help, part of being a manager surely. One bar staff for 200 people at a wedding is ludicrous and you did very well to last as long as you did.

‘I probably would have called or texted one of the managers and said I had diarrhoea or something so someone needed to come to take over, then never gone back, but I can understand heat of the moment and all that. ‘ 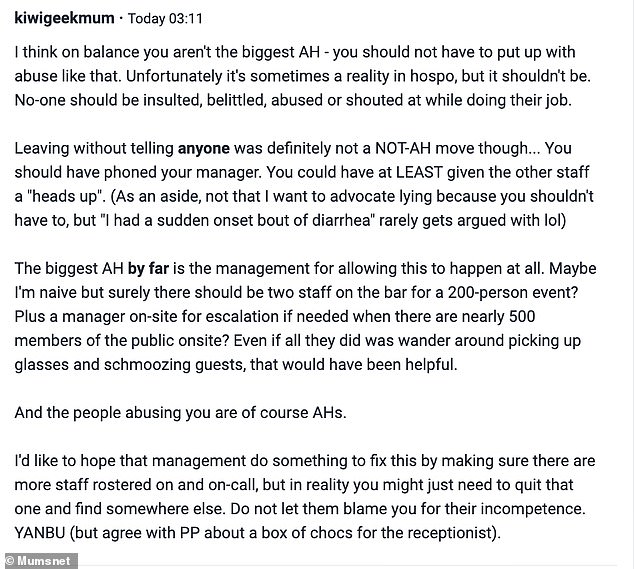 Some people thought the woman should have told the other staff members or management before leaving as she could have been ‘liable’ if the till was stollen.

One person wrote: ‘I think on balance you aren’t the biggest a*****e – you should not have to put up with abuse like that. Unfortunately it’s sometimes a reality in hospitality, but it shouldn’t be. No-one should be insulted, belittled, abused or shouted at while doing their job.

‘Leaving without telling was definitely not a move though… You should have phoned your manager.

You could have at LEAST given the other staff a ‘heads up’. (As an aside, not that I want to advocate lying because you shouldn’t have to, but “I had a sudden onset bout of diarrhoea” rarely gets argued with lol)

‘The biggest a*****e is the management for allowing this to happen at all. Maybe I’m naive but surely there should be two staff on the bar for a 200-person event?

‘Plus a manager on-site for escalation if needed when there are nearly 500 members of the public onsite? Even if all they did was wander around picking up glasses and schmoozing guests, that would have been helpful.

‘And the people abusing you are of course a*****es. I’d like to hope that management do something to fix this by making sure there are more staff rostered on and on-call, but in reality you might just need to quit that one and find somewhere else. Do not let them blame you for their incompetence.’

Another wrote: ‘Did you let anyone else know you were leaving? The staff in the other function? Reception? What time does the night manager start?

‘I understand how stressful it was for you but to walk out and not inform anyone is awful.

A fourth wrote: ‘Whilst the abuse the wedding group gave you was very wrong, I would be very upset if I booked a reception or party for 200 people and there was one bar staff on, they have paid a lot of money and the hotel wasn’t fulfilling its obligation.

‘Disappearing without informing the duty manager is plain wrong too, I can understand you were at the end of your tether but you should have told someone what em was happening earlier especially the sexual harassment.