Base jumpers walk along ‘plank of death’ before 300ft leap

This is the moment two thrill-seekers made the terrifying walk over the ‘Plank of death’ before leaping 300ft.

Andrew Toyer and Mick Hill, described online as the ‘BASE jumping bandits’, said that their legs turned to jelly as they walked along the plank before their jump.

It is unclear where exactly the footage is filmed, but it is a radio antenna in Europe described as the ‘most dangerous base jump exit in the world’ by the jumpers.

In the clip, you can see the two thrill-seekers shakily making their way across the plank.

They can be heard cursing multiple times while describing their legs as shaking like jelly.

At one point, one can be heard joking that the 300ft jump is ‘nothing’ compared to the walk across the ‘Plank of death’.

After they both make the walk across, they laugh nervously, giving each other high fives as they reflect on their walk.

After that, they ready themselves for the terrifying jump, though they seem relaxed about it in comparison.

The first man makes his exhilarating leap, landing on the sandy ground before turning back and waiting for his companion. 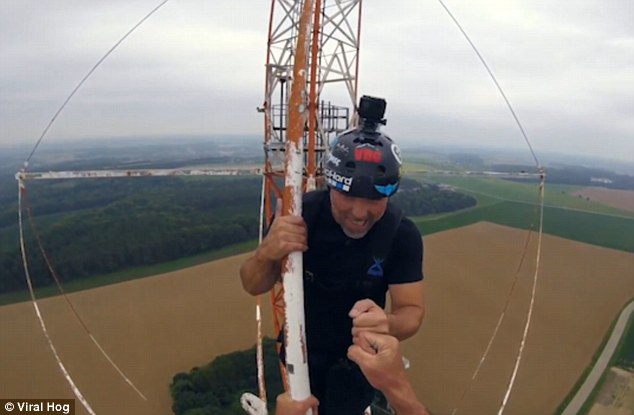 After they both make the walk across, they can be seen clasping hands in relief while talking about how their legs are shaking like jelly

The camera angle really emphasises the heart-stopping nature of the 300-ft jump as the second man is seen leaping from the antenna while looking like a speck in the sky.

He eventually lands safely with the daredevils exchanging high-fives as they celebrate the successful base jump. 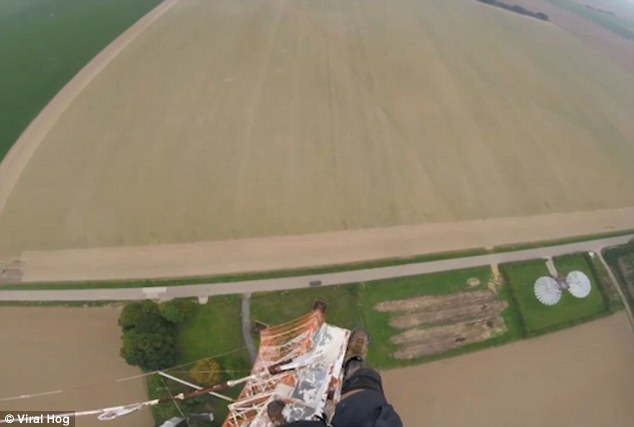