Basil Goulandris’ property in Belgravia where he claims he was forced to move out due to renovation noise. But after missing an appeal deadline he now owes neighbour Nicholas Knight thousands to cover legal costs

A billionaire shipping magnate who sued his neighbour for more than £800,000 has seen his attempts backfire after an admin delay meant his appeal was thrown out.

But despite demanding £821,000 to compensate for his family’s misery, Mr Goulandris now owes thousands in legal fees for missing the appeal deadline.

He claimed the project damaged his 18th Century home in London’s exclusive Chester Square and his family were so disturbed by the racket they had to move elsewhere for months.

Mr Goulandris, 56, demanded £640,000 to cover the costs of four months alternative accommodation for him and his family – but will not receive a penny after an Appeal Court ruling today.

Tom Weeks QC, for Mr Goulandris, earlier told the court he and his family had ‘endured two years of building works next door’, causing ‘excessive noise, vibrations and disturbance’.

A building surveyor came up with the £821,000 compensation figure, saying the family had been forced to move out by the upheaval of the subterranean work which had damaged their home.

But Mr Knight said the internal decor of the Goulandris home was ‘defective from the outset’ and he should not have to pay to make it perfect.

Adding that it had also been unnecessary for the family to move out for months. 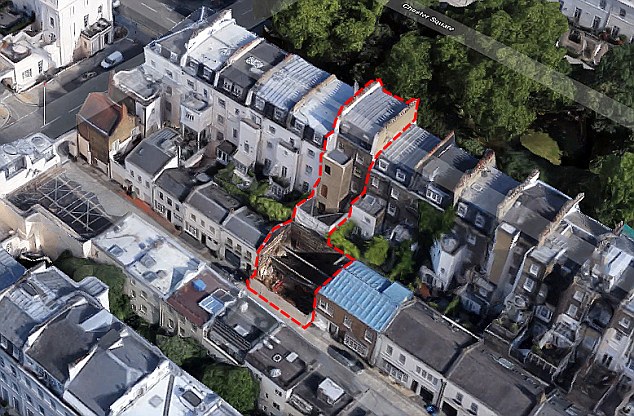 Mr Goulandris was awarded just £55,000 in 2015 by an independent expert who said that many of the defects in his home – including hairline cracks in the walls – had been there before work started on Mr Knight’s basement (Google image of Mr Knight’s property during the extensive building work)

Mr Goulandris was awarded just £55,000 in 2015 by an independent expert who said that many of the defects in his home – including hairline cracks in the walls – had been there before work started on Mr Knight’s basement.

Decorative damage was ‘comparatively minor’ and there had been no need for the family to vacate their home, he ruled.

Mr Goulandris had 14 days to lodge an appeal against the expert’s decision – but three Appeal Court judges today ruled that he missed the strict deadline by one or two days.

Lords Justice Patten, Hamblen and Henderson decided that he had been validly served with the expert’s report by email and the two-week time limit began to run when it landed in his inbox.

Mr Goulandris is a relative and namesake of the renowned shipping tycoon and art collector, Basil Goulandris, who helped create Greece’s Museum of Modern Art and amassed a collection of treasures worth over £1billion.

He died in 1994, aged 81, but his son has carried on the family’s maritime tradition by taking a key role in managing the Goulandris shipping fleet, whch has its roots in the 19th Century.