Mother, 40, is ‘lucky to be alive’ after she contracted sepsis from a SPIDER BITE that left her ‘dripping with sweat’

Rebecca Matthews-Johnson, 40, said she ‘thought she was going to die’ after she contracted sepsis from a spider bite on her right leg after spending an afternoon with her husband Dave, 42 (pictured)

A mother says she is lucky to be alive after contracting sepsis from a spider bite.

Rebecca Matthews-Johnson, 40, noticed a red bite mark on her right leg after an evening in her garden in Bassetlaw, Nottinghamshire.

But in just 72 hours, the community support leader was in the grips of a horrific fever – and told her son she thought she was going to die.

Her leg swelled and turned bright red, so she took herself to Bassetlaw District General Hospital where medics immediately saw that she had the signs of early-onset sepsis.

Mrs Matthews-Johnson said: ‘If I hadn’t gone in when I had it could have been curtains potentially. I would have been a much worse scenario. It was the worst I’ve ever felt in my life.

‘I’d felt worse and worse over the course of that week. On the Wednesday night I felt terrible and feverish, the sweat was just pouring off me.

‘I told my son on the day I went to hospital, “I think I’m going to die”. He just laughed. I knew something was wrong, I couldn’t put my finger on it though.

‘Overall, I feel very lucky, it could have been a lot worse.’

She believes she was bitten on Saturday July 13 after spending an afternoon sitting in the garden with her husband Dave, 42.

After only a few days she began to feel unwell and noticed that the skin on her right leg near the bite mark was slowly turning bright red. 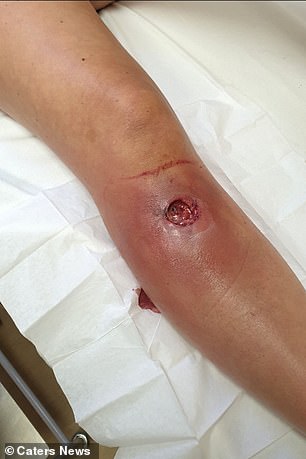 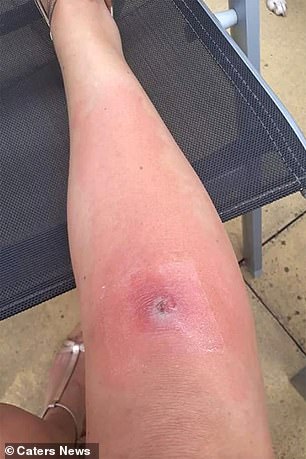 She developed fever, chills and was becoming slightly forgetful. Her leg swelled and turned bright red, she took herself to A&E where medics immediately saw that she had the signs of only-onset sepsis

Mrs Matthews-Johnson recalled that she had an itch on her right leg but thought nothing of it until redness began to spread under the skin.

She dismissed the symptoms as a minor bug and visited her GP who proscribed her some antibiotics, which she said didn’t work.

‘I still felt really terrible, the bite went black and started to abscess. The poison spread from my knee right down to the bottom of my leg.

She said: ‘I only went to the hospital when I had a gut feeling I was going to die, it was that bad.

At that point she had developed fever, chills and was becoming slightly forgetful. 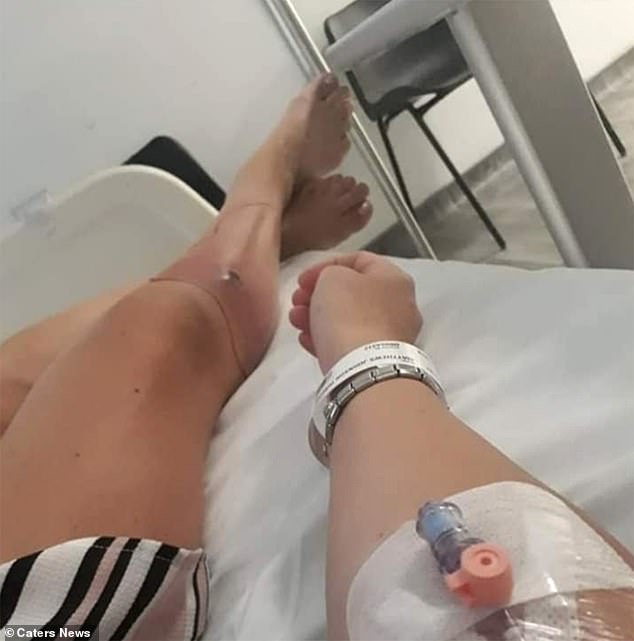 ‘I told the nurse my symptoms, they came in, took my temperature and checked me out. They quickly hooked me up to intravenous drugs and fluids,’ she said

‘I told the nurse my symptoms, they came in, took my temperature and checked me out. They quickly hooked me up to intravenous drugs and fluids.’

Mrs Matthews-Johnson had a temperature of 40 degrees and heart rate of 122 was in the midst of a major bacterial infection and the early stages of sepsis.

She had surgery on the abscess and spent two weeks recovering from a severe bacterial infection.

She said the one of the nurses told her that if she had not admitted herself into hospital sooner when she did, she would would have developed full blown sepsis.

‘The hospital were absolutely fantastic, they were so quick and without them it could have been a different story.’

Mrs Matthews-Johnson, who is now back to work after her nightmare ordeal, added: ‘For anyone else feeling unwell I’d say don’t leave it as long as I did. Go and get medical attention, it’s not worth the risk.

‘I consider myself to be very lucky. I’m just glad I’m alive and I’ve still got my leg,’ she added.