The new boss of Australia’s feared Comanchero bikies, Allan Meehan, has shown off his style in a designer Versace dressing gown, posing at home in his kitchen with his wife Elise.

Mrs Meehan is seen wearing slightly more humble sleepwear than her husband’s $867 ‘I Love Baroque’ robe, donning a $55 set of Peter Alexander Winnie the Pooh pyjamas – but both leisure wear outfits are made from fabric patterned in the Comanchero bikie gang colours of red, black and gold.

Posting the photo of himself and his wife on his Instagram page, Meehan added the comment ‘new robe same love’ with a yellow heart emoji.

The Meehans have lived in their four bedroom Yerrinbool home, in the Southern Highlands of NSW, that they are pictured in, for four years, and have a teenage daughter together.

The bikie boss’s new designer robe and his Instagram comment may be a reference to the grey, slightly daggy bath robe he was captured in on police video when they paid him a visit to the home in early July.

NSW Police released video and still images which were published nationally showing officers handing Meehan a notice informing him they intended to go to the Supreme Court and take out a serious crime prevention order against him. 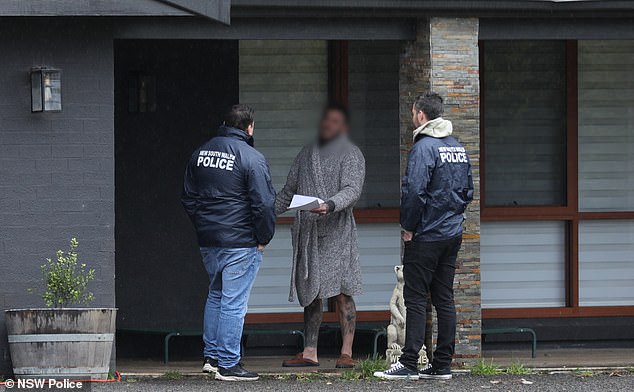 It was a show of authority by the state’s Strike Force Raptor which proactively targets Outlaw Motorcycle Gang (OMCG) activity.

Just two days earlier, Meehan had announced his elevation to gang national president with an Instagram post showing a patch on his leather vest which revealed his new title and the caption: ‘U cant see the eyes of the demon, until him come a callin.’

Puffing on a cigarette, Meehan stood on his front verandah reading the order which would allow police to stop him from associating with other bikies in NSW, or use phones or bank accounts not approved by them and which included a firearms prohibition.

With his bare, heavily tattooed legs thrust into brown slippers, and wearing a dark grey jumper beneath the shapeless grey robe, the new Comanchero boss wasn’t exactly the picture of sartorial elegance. 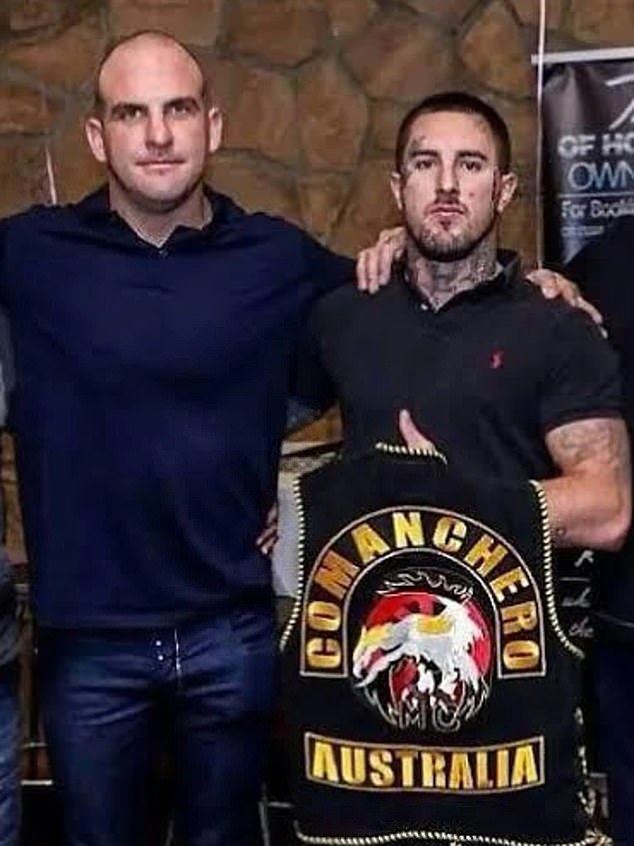 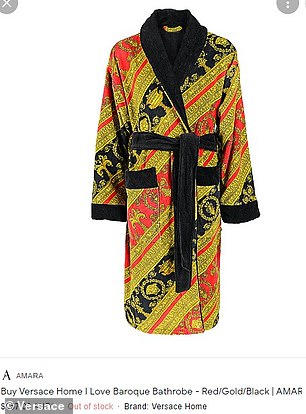 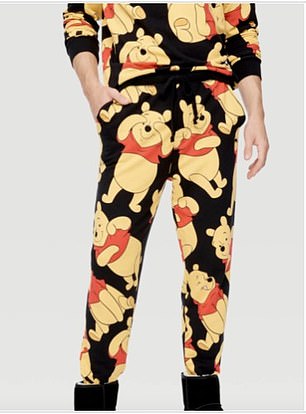 In the wake of the visit, Meehan may have felt he needed to look the part for the big job ahead of him.

He has taken over a feared organisation that is nevertheless facing major internal and external challenges. His immediate predecessor is in jail charged with murder, and another of the men who previously held his position was shot dead four years ago.

Meehan’s ultimate boss, Mark Buddle, who was the club’s self-declared ‘commander of the world’, was on the run overseas until this week.

Buddle is now under heavy protection in custody after being extradited from Turkey and flown to Victoria to face charges of allegedly smuggling $40 million worth of cocaine. 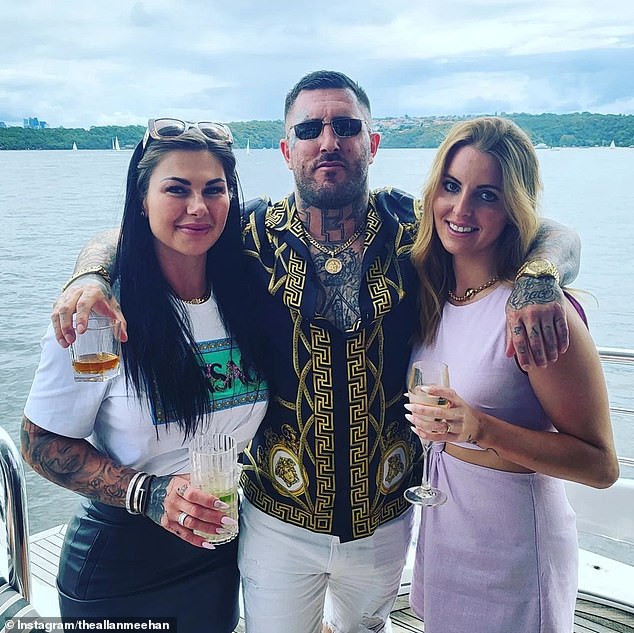 Allan Meehan posted this image on Instagram of himself photographed with his wife, Elise (left) and another woman, commenting ‘What’s life good for is you don’t go thru it as a man’s man!’ 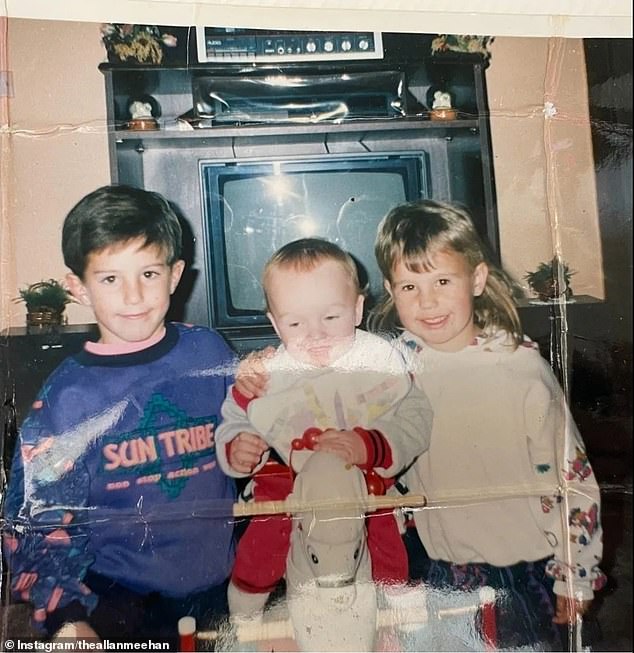 The new Comanchero bikie boss also posted this throwback photo of himself and two other children, possibly his siblings, commenting on his ‘humble beginnings’ and ‘many lessons learned’ 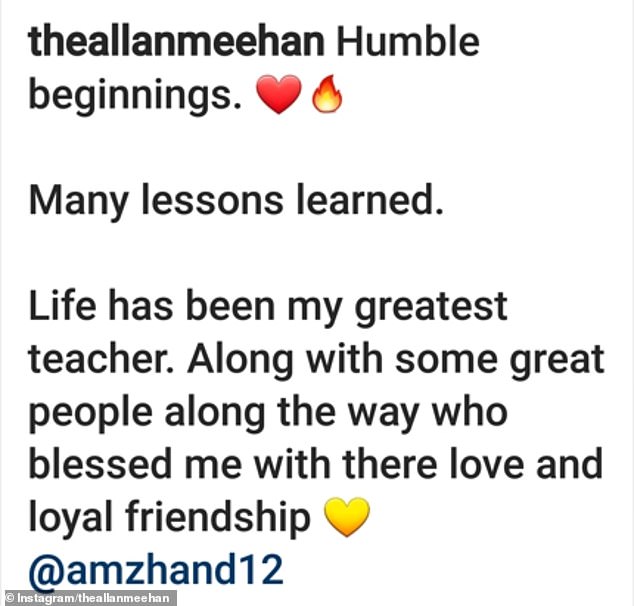 Since becoming national president of the feared Comanchero bikie gang, Allen Meehan has made a philosophical comment on Instagram crediting the people in his life for giving him their love and friendship

Detective Superintendent Grant Taylor of the NSW Criminal Groups Squad has warned that Meehan will continue to be targeted like other bikie leaders who came before him.

But Meehan appears to be taking a philosophical approach while taking control of the Comanchero.

Before posting the latest photo of himself in his wife in their new bikie club coloured sleepwear, Meehan had earlier posted a photo of himself as a young boy, with the statement ‘Humble beginnings. Many lessons learnt. Life has been my greatest teacher.

‘Along with some great people along the way who blessed me with their love and loyal friendship’.

Meehan grew up in public housing at Liverpool in Sydney’s south-west and joined the Rebels when he was just 18, rising to president of that club’s Cronulla chapter.

He was reportedly lured to patch over to the Comanchero by Mark Buddle, who reportedly gave him his blessing for the top job. 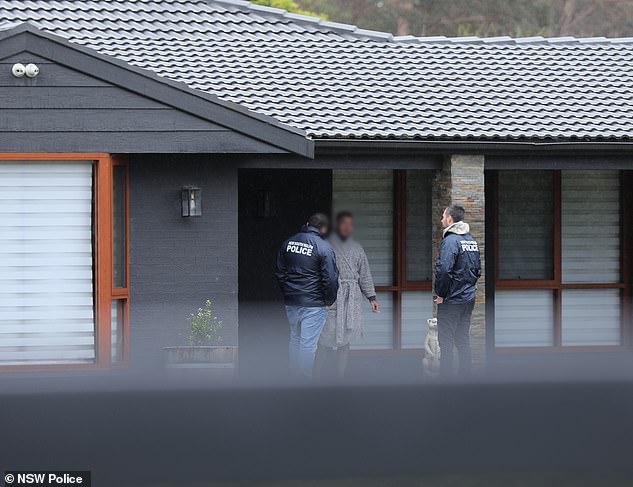 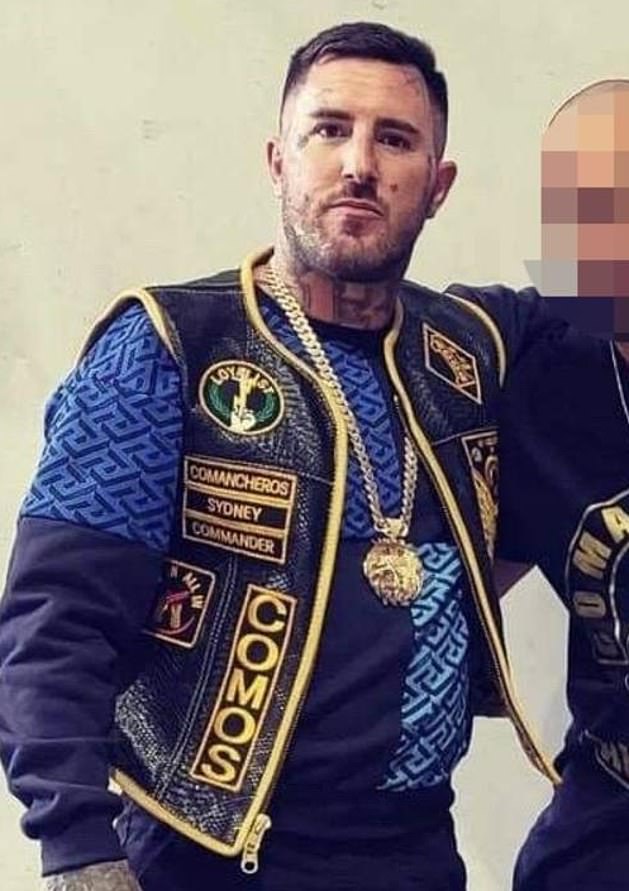 New Comanchero national president Allan Meehan, 35, (pictured) has his work cut out for him taking over the country’s most powerful outlaw bikie gang.

The 35-year-old Meehan took over the Comanchero national presidency in early July from 44-year-old Mick Murray, who was arrested in by Victoria Police in April over the 2019 killing of Mitat Rasimi, an associate of high-profile drug lord Tony Mokbel.

After Murray stood down and following a gang member’s funeral, Meehan’s appointment was made at a meeting of senior Comanchero leadership in Melbourne.

Since taking over, Meehan scored a coup by convincing Jesse Vella to patch over from the rival Rebels to the Comanchero, effectively stealing a member of that gang’s ‘royal family’ and potentially sparking pay back violence.

Murray had run the gang from the Victorian capital but Meehan is expected to base himself in New South Wales where the Comanchero was founded.

Meehan is also seen as the rightful restorer of the Comanchero to the gang’s roots.

Since its inception on the NSW Central Coast the ‘Condor Empire’ – named for the bird of prey on the Comanchero colours – has started up chapters in Russia, Bosnia, Spain and New Zealand.

A Catholic who regularly attends Mass, Meehan is known for his devotion to his family as well as to being a bikie. 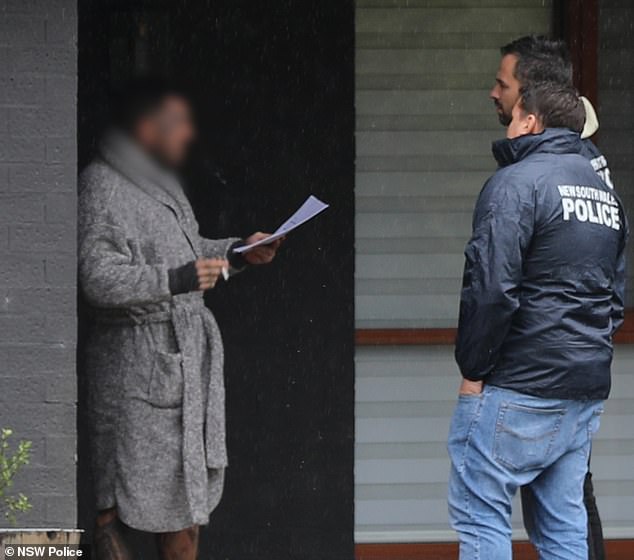 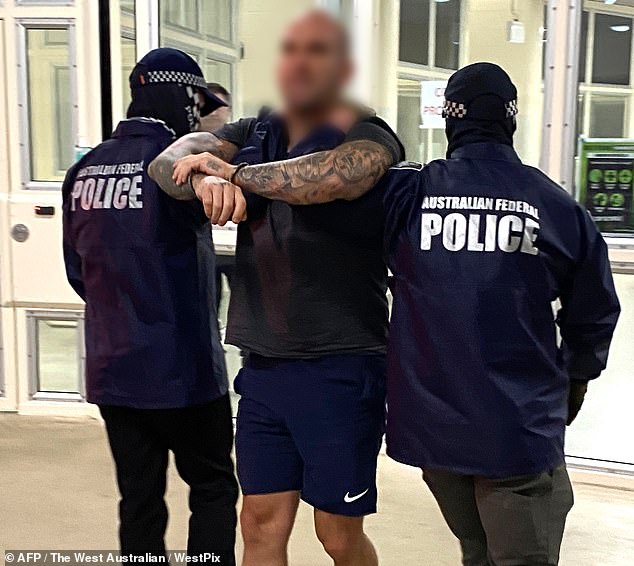 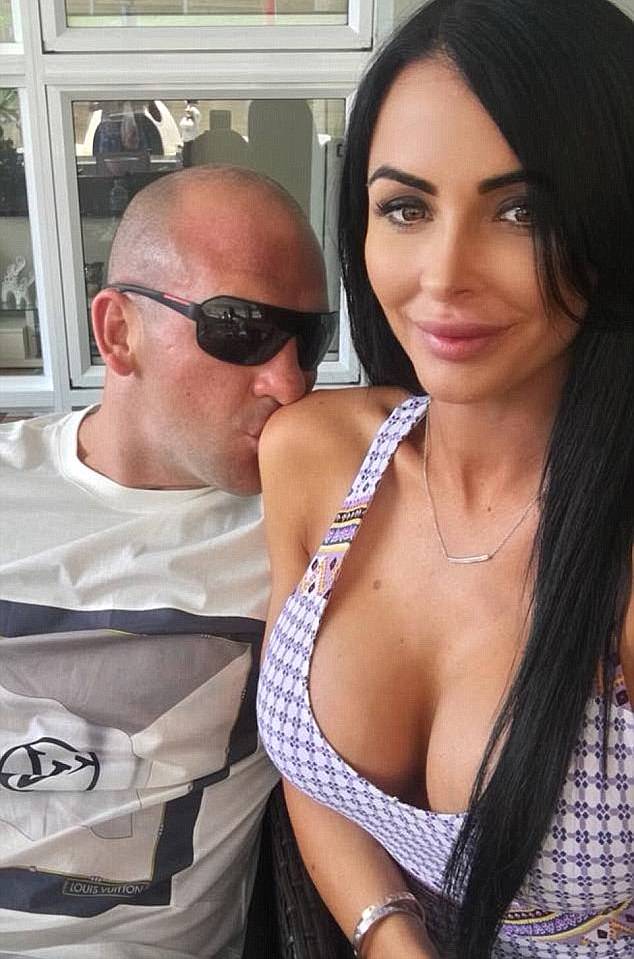 Meehan was reportedly lured to patch over from the Rebels to the Comanchero by onetime national president Mark Buddle, pictured with his partner Mel Ter Wisscha, who is in a detention centre in Istanbul

‘He’s spent his entire adult life in bikie gangs. He doesn’t know any other life.’ a source told the Herald Sun which reported that he is well respected among the Comanchero’s remaining old guard as well as new recruits.

The gang had been run by Beirut-born Mahmoud ‘Mick’ Hawi who later left the Comanchero only to be shot dead outside a Rockdale gym in Sydney’s south in February 2018.

That killing followed the shooting of senior Comanchero Tarek Zahed, 41, and his brother Omar, 39, as they were ambushed by two gunmen while leaving an Auburn gym in the city’s south-west on May 10.

Tarek survived but his brother Omar died at the scene. 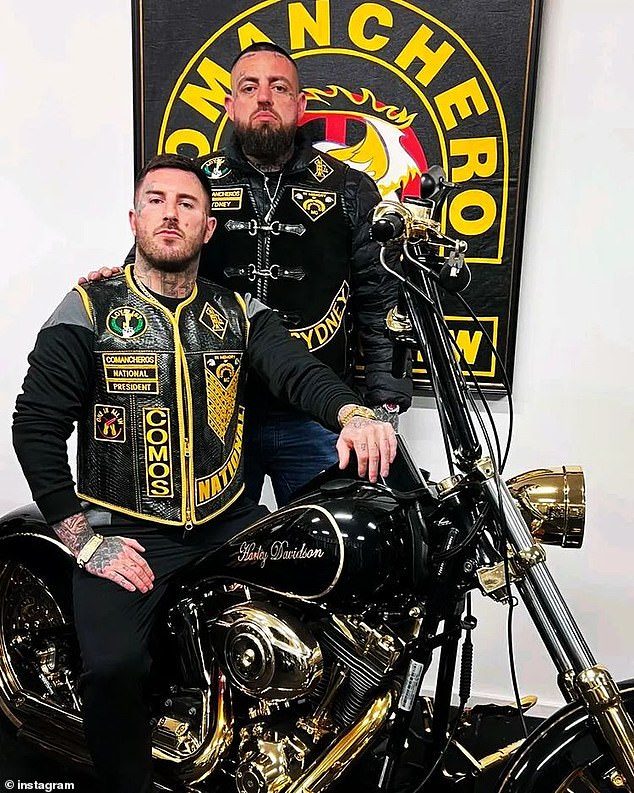 After patching over from the Rebels to the Comanchero, when Allen Meehan (left) became national president he lured Rebel ‘royalty’ Jesse Vella (right) over to the club in July 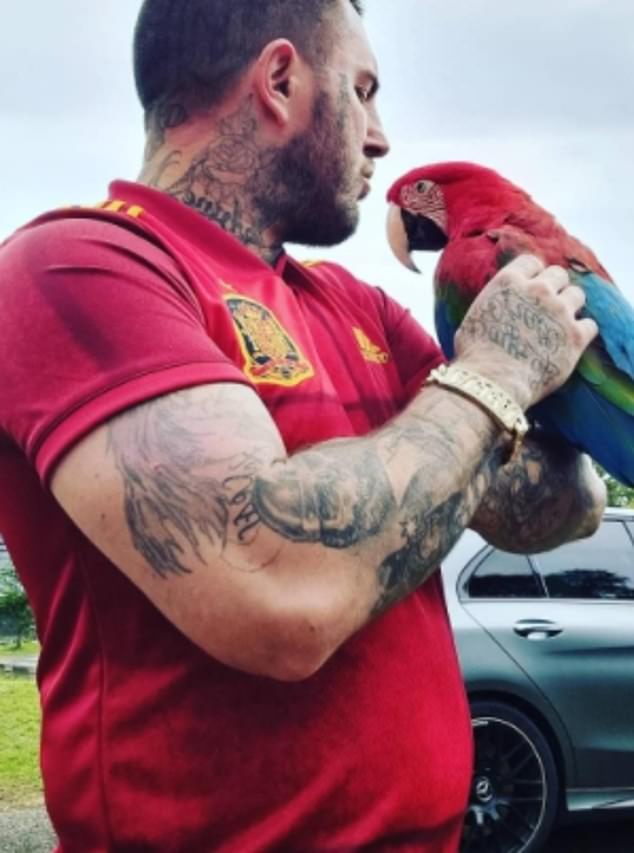 Meehan (above) grew up in public housing at Liverpool in Sydney’s south-west and joined the Rebels when he was just 18, rising to president of that club’s Cronulla chapter

Dozens of Comanchero have been arrested in federal police raids as part of Operation Ironside, one of the most significant crackdowns on Australian organised crime.

Det. Supt Grant Taylor said Meehan’s takeover of the Comanchero in NSW had focused police attention on him for the foreseeable future. 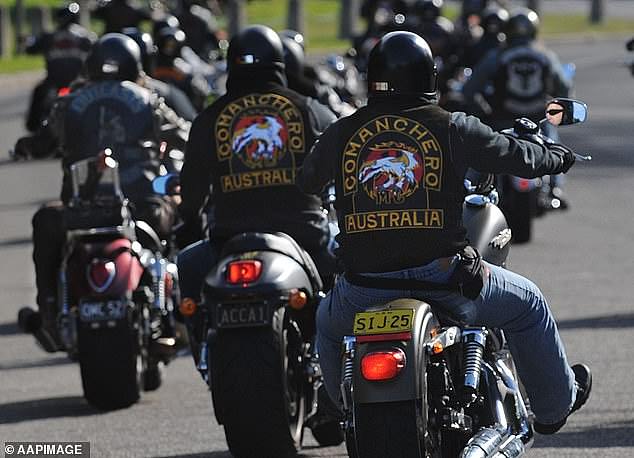