The Blenheim Palace bathroom where a £4million 18-karat gold toilet was ripped out by thieves and stolen has been pictured for the first time since the multi-million pound burglary.

The golden toilet, entitled ‘America’, had been plumbed into the stately Oxfordshire home for visitors to use after an exhibition by Italian artist Maurizio Cattelan opened there on Friday.

Cattelan, known for his provocative sculptures, arranged for the toilet to be moved to the palace, which is also the birthplace of Sir Winston Churchill, in the same way he did at the Guggenheim Museum in New York in 2016, when 100,000 people queued to use it.

But the toilet, valued at $5million, was stolen in the early hours of Saturday, leaving the artist and Blenheim bosses devastated and the bathroom in tatters.

Chief executive Dominic Hare said he hopes the ‘stupid and pointless’ act of stealing the toilet will ‘immortalise’ the work of the artist – as he defended the stately home’s ‘sophisticated security system’ and insisted it was insured.

He added: ‘When you show the finest art to everyone, to the audience it was made for, you take a risk. Almost always that risk is worth taking. We say that even today.

‘We hope against hope that we can recover this precious work of art. It is deeply ironic that a work of art portraying the American Dream and the idea of an elite object made available to all should be almost instantly snatched away and hidden from view.’ 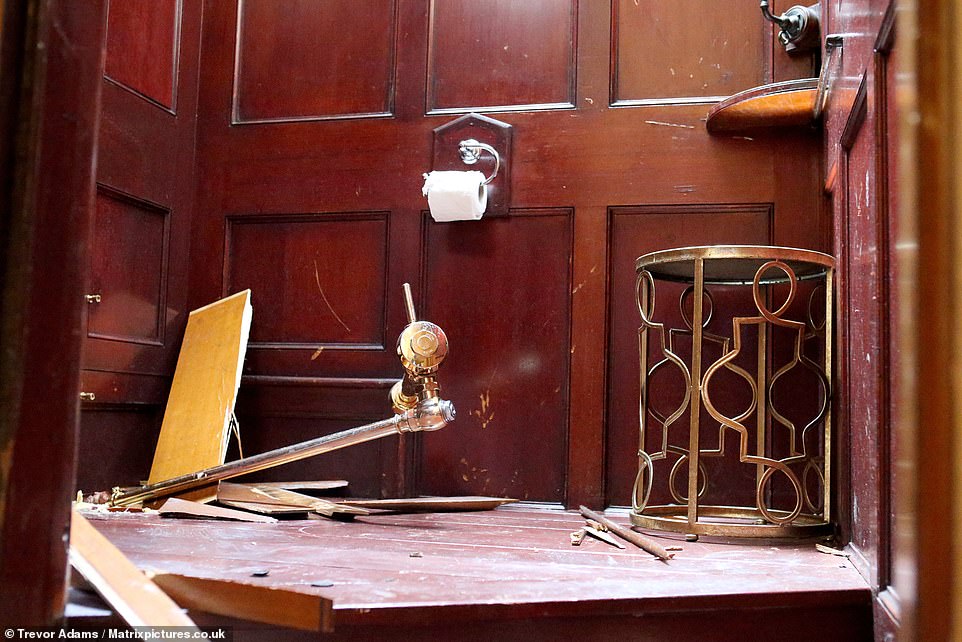 Crime scene: The bathroom at Blenheim Palace is pictured in tatters after thieves stole the golden toilet over the weekend

Earlier today, Mr Hare told the BBC that a gang ‘mounted a very fast’ raid on the Oxfordshire palace overnight, stealing the fully functional loo before security could respond.

In the early hours police were called to the stately home and found the solid gold toilet gone and water gushing over the floor, causing extensive damage.

Thames Valley Police confirmed a 66-year-old man had been arrested in connection with the theft on Saturday.

Cattelan denied staging the burglary in a Banksy-style prank, telling the New York Times: ‘I wish it was a prank. Who’s so stupid to steal a toilet?

‘America was the 1 per cent for the 99 per cent, and I hope it still is. I want to be positive and think the robbery is a kind of Robin Hood-inspired action.’

Speaking on BBC 5 Live, Blenheim boss Mr Hare said this was the ‘first theft of its type in living memory’ from the palace, and confirmed the home has a ‘sophisticated security system’. 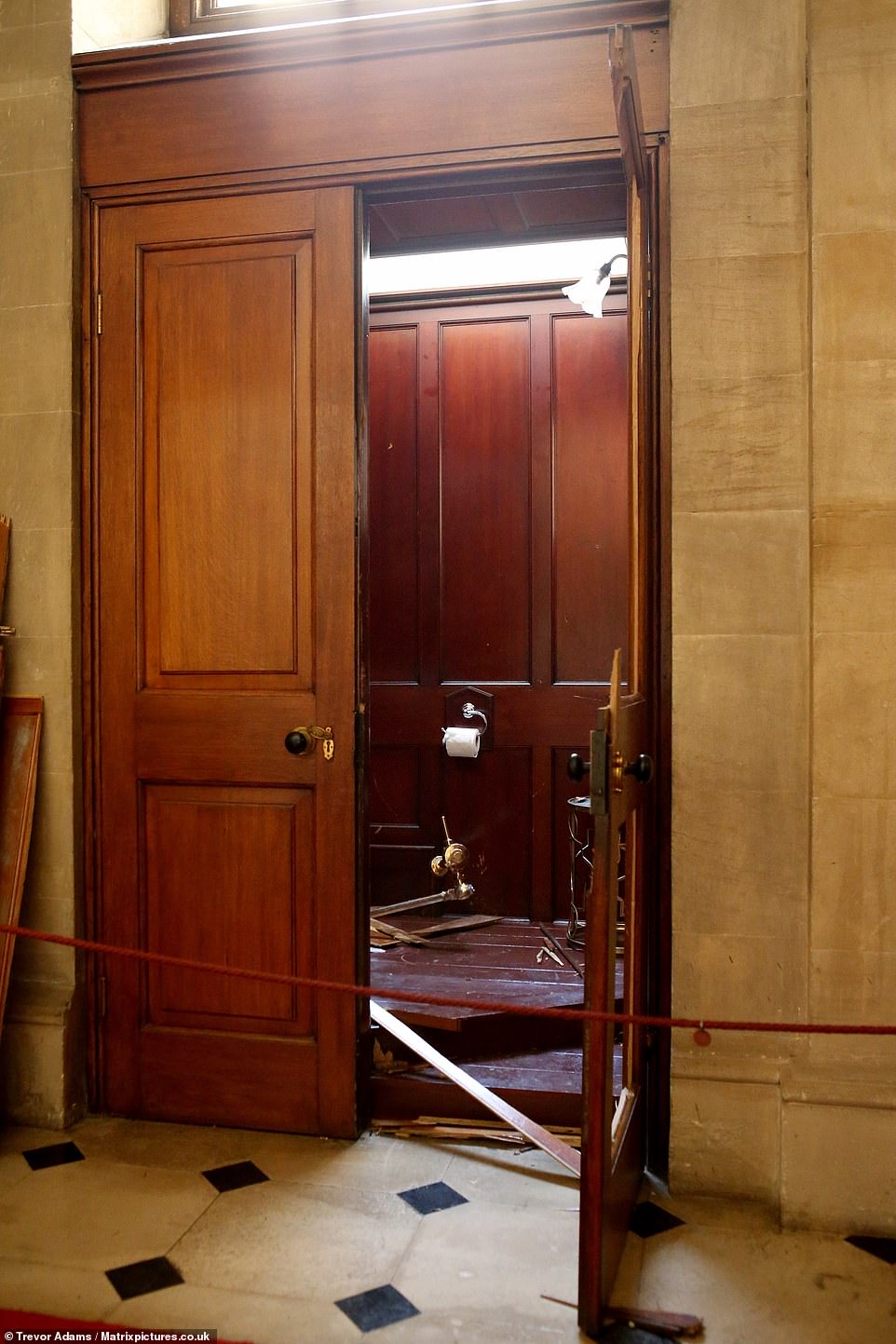 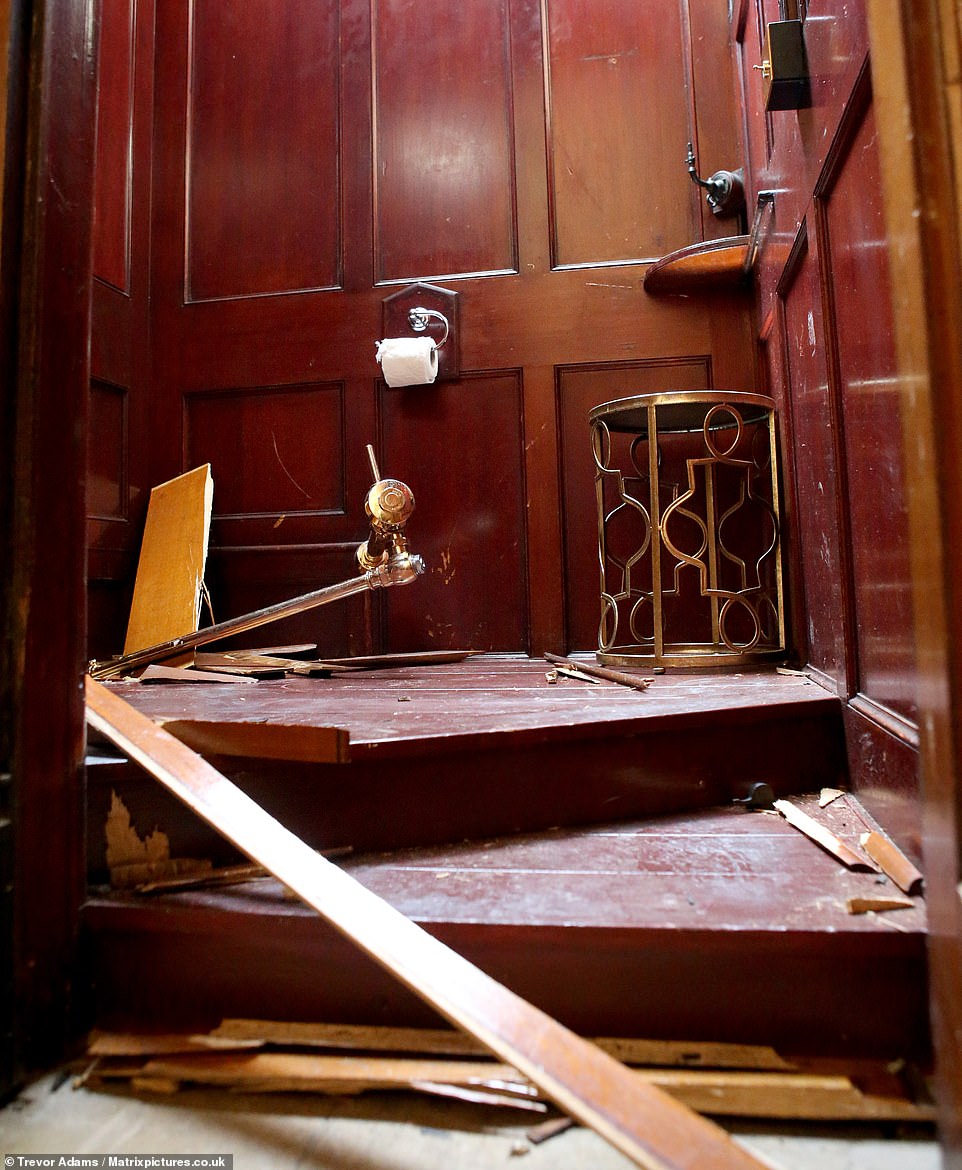 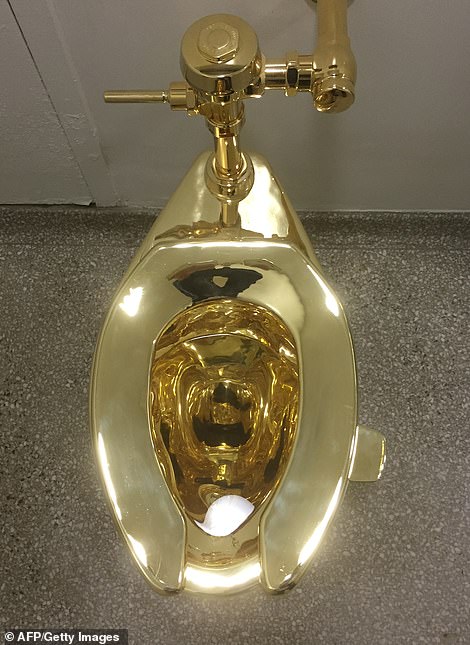 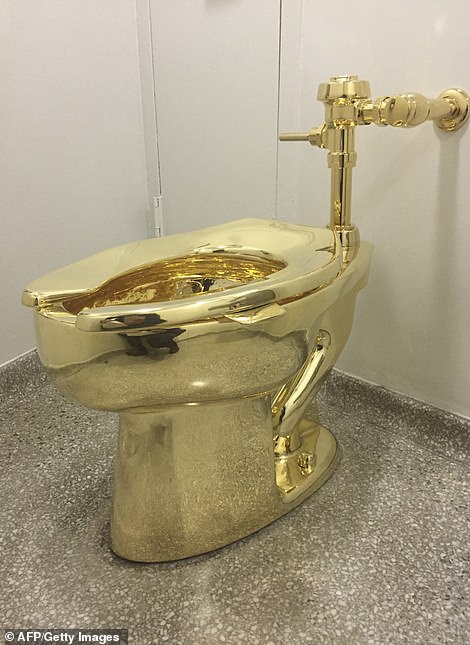 The golden lavatory titled ‘America’ was created by Italian artist Maurizio Cattelan. The toilet was created for the Guggenheim Museum in New York (pictured), where more than 100,000 people queued to use the security-guarded loo

He said: ‘We have a sophisticated security system and we have not had a theft of this type in living memory. But what’s happened has happened and so we clearly need to challenge ourselves on that.

‘We have security on site. A group of men in two vehicles mounted a very fast smash and grab raid before security could respond.

‘The sadness is that unlike most art, its constituent parts are valuable anyway so it’s not out of the question it will be melted down’.

Police confirmed this morning that they are making ‘every effort’ to locate the thieves and the stolen toilet – and will remain ‘in and around’ Blenheim Palace as investigations continue.

Investigating officer Detective Inspector Jess Milne said: ‘We are following a number of lines of enquiry and there will continue to be a police presence in and around the area of Blenheim Palace while our investigations continue.

‘We are making every effort to locate the offenders and the toilet that was stolen.’ 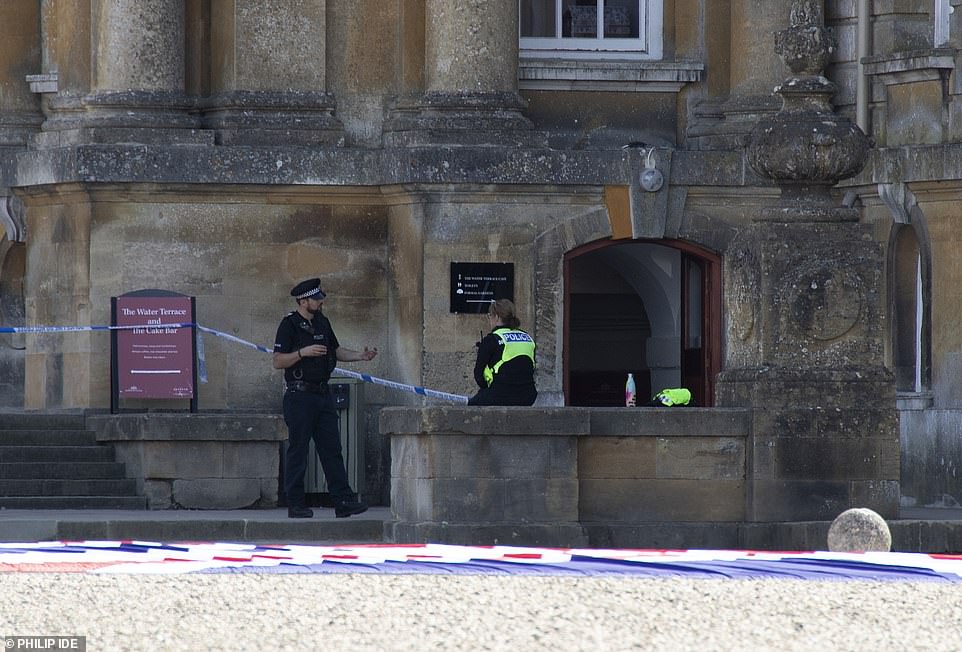 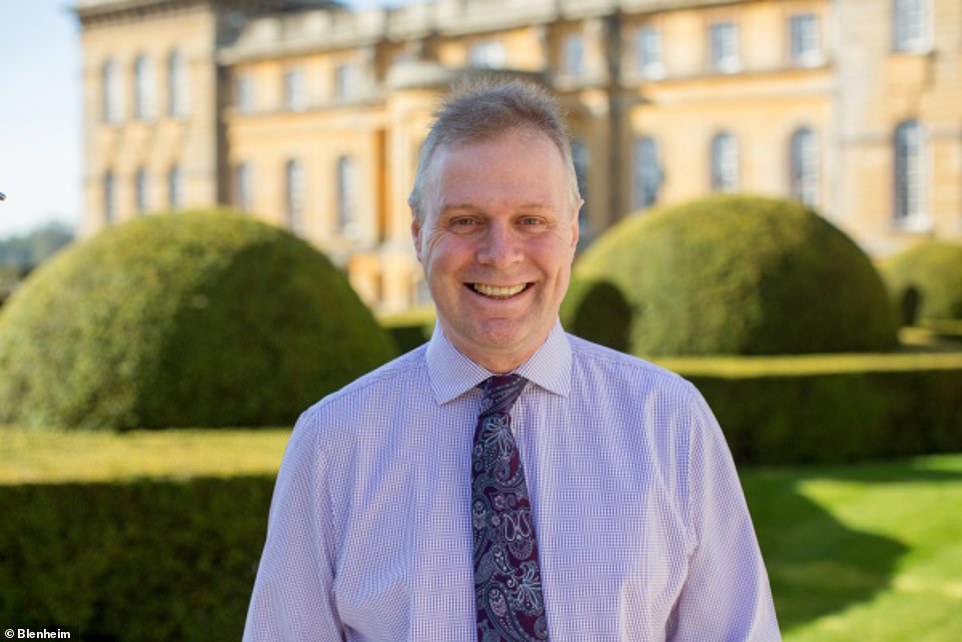 Chief executive for Blenheim Palace Dominic Hare (pictured) said this was the ‘first theft of its type in living memory’, and confirmed the home has a ‘sophisticated security system’

Sources at the estate, near Woodstock, said the gang used a heavy vehicle, believed to be a 4×4, to break down a large metal gate on the estate and drive to the palace. Several broken window panes near the Great Court suggested one possible entry point, but police refused to comment.

However, quite how thieves moved the hefty item remains a mystery. A palace source said there was a ‘lot of consternation’ about how they had been able to get inside and spend so long at their task.

‘There’s a lot of serious art in the palace,’ said the source, ‘but these guys were clearly highly professional and knew what they were about.

‘They could have studied the palace on the internet, or as made as many visits as they needed to, familiarising themselves with the layout.

‘We can only assume they took the gold purely for its intrinsic value to be melted down, because a gold loo is not going to be easy to conceal for very long.’ 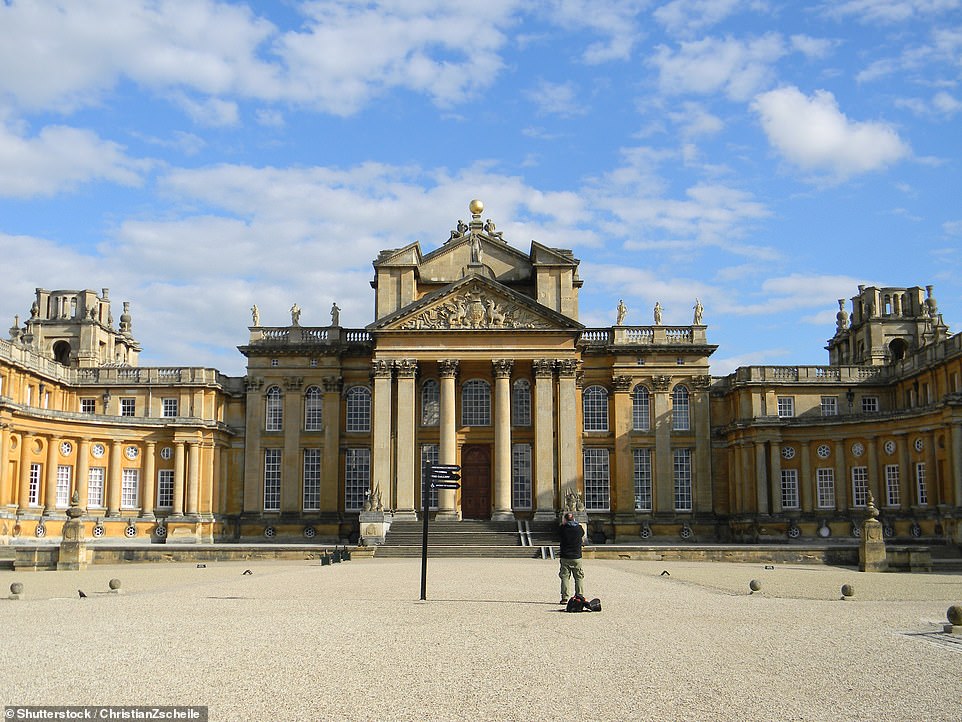 In what now seems a remarkable display of hubris, Lord Edward Spencer-Churchill last month said he had no plans to guard the valuable WC, which was part of an exhibition from the Italian ‘prankster of the art world’, Maurizio Cattelan.

‘It’s not going to be the easiest thing to nick,’ said the Duke of Marlborough’s half-brother. ‘Firstly it’s plumbed in, and secondly a potential thief will have no idea who last used the toilet or what they ate. So no, I don’t plan on guarding it.’

The Cattelan exhibition – which also includes lifelike models of a praying Hitler and Pope John Paul II being hit by a meteorite – was launched with a glittering dinner on Friday night. It is believed to have been attended by the artist himself.

Once open, visitors would have been able to book a three-minute slot to use the gold toilet as part of the £27 admission price. The piece, entitled America, was placed opposite the room where Churchill was born in 1874. 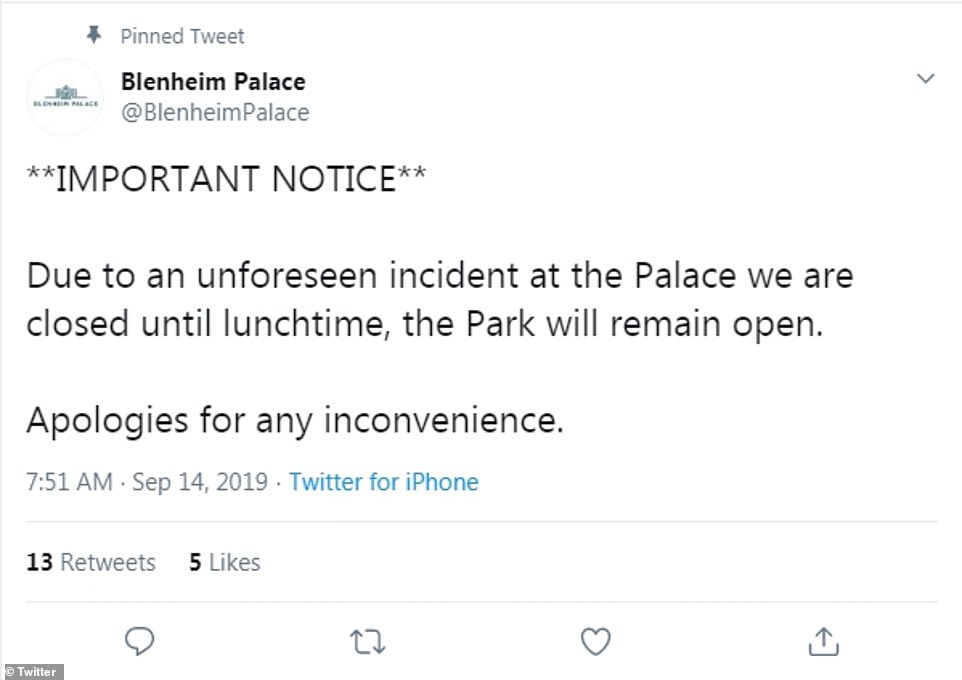 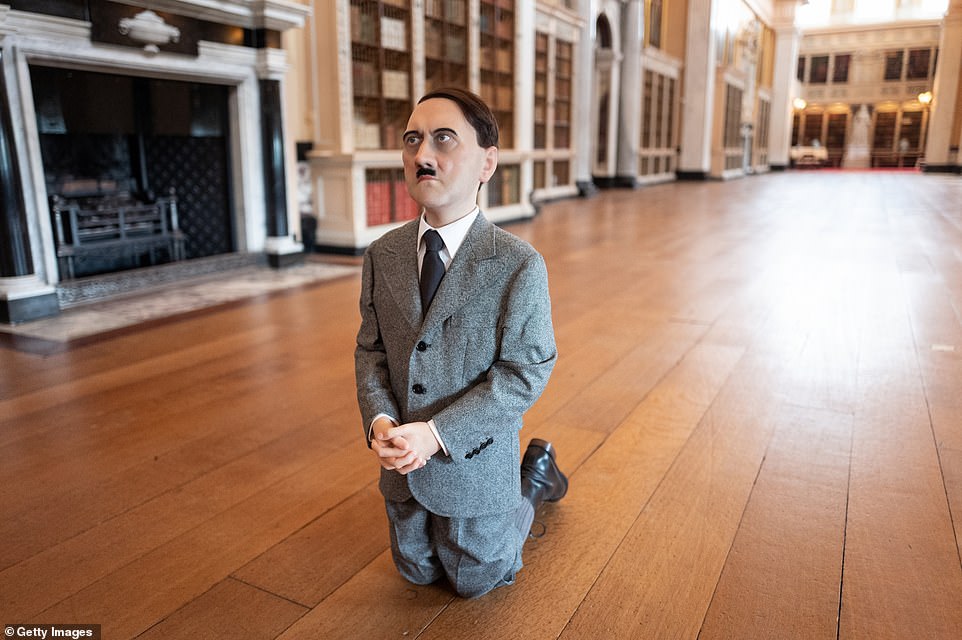 Him, is a realistic model of a schoolboy version of Adolf Hitler on his knees praying. It has been placed in the organ room at Blenheim for visitors to see for themselves. The controversial work is one of many on show at Blenheim this autumn

It had previously been on display at the Guggenheim in New York during Donald Trump’s election campaign, when more than 100,000 people used it.

The museum subsequently offered to lend it to the White House – rather than a Van Gogh Trump’s staff originally asked for – but officials declined the offer.

Speaking to the The Mail on Sunday last night, Mr Hare said: ‘We are saddened by this extraordinary event, but also relieved no one was hurt and that nothing else was stolen.

‘This would have taken some planning. I’m not exactly sure how much the toilet weighs, but it’s certainly a lot – two grown men would struggle to lift it.

‘Even apart from the artwork that was taken, which is worth around £4.8 million, there are many other valuable pieces, both in the exhibition and on display in the palace’s own collection. 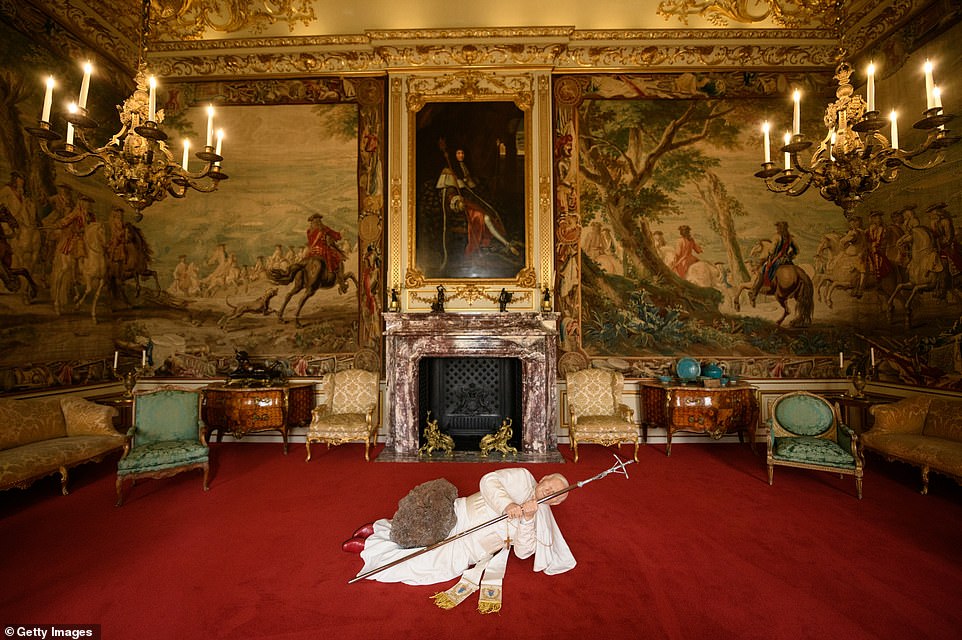 ‘La Nona Ora’, translated as ‘the ninth hour’ is the name given to Cattelan’s realistic model of Pope John Paul II being hit by a meteorite. It is one of many controversial pieces placed in and around Blenheim Palace this autumn

However, he promised it would be ‘business as usual’ for visitors and the exhibition as the investigation continues.

Detective Inspector Jess Milne, of Thames Valley Police, said on Saturday: ‘The piece of art that has been stolen is a high-value toilet made out of gold that was on display at the palace.

‘Due to the toilet being plumbed in to the building, this has caused significant damage and flooding. We believe a group of offenders used at least two vehicles during the offence.’

Detectives believe the gang left the estate just before 5am. Yesterday, the five-bar gate they smashed to enter the 120,000-acre estate was being guarded.

Mr Hare added: ‘We are very grateful to our staff and to Thames Valley Police for their rapid and brave reactions.

‘We knew there was huge interest in the Maurizio Cattelan contemporary art exhibition, with many set to come and enjoy the installations. But we still have so many fascinating treasures in the palace and the remaining items of the exhibition to share.’