With many still reeling from the gales and downpours of Storm Ciara, the last thing we all need is more bad weather.

But forecasters are warning that Britain faces another battering, with the arrival of Storm Dennis.

The fourth named storm of the season comes with a further ‘danger to life’ warning for this coming Saturday.

It will reach the UK less than a week after Ciara brought 97mph winds and up to seven inches of rain.

A man died after being struck by a falling tree yesterday morning, becoming the fourth weather-related death in recent days.

The dog walker was hit by the tree while at Black Wood in Woolton, Liverpool, Merseyside Police said.

A weather warning has been issued for the whole of England – apart from the far North – and Wales between noon and the end of Saturday.

The Met Office said: ‘Storm Dennis will bring very strong winds and potential for disruption to many parts of England and Wales on Saturday. Gusts of 50mph are expected widely inland, with around 60mph in places.

A jogger runs through snow near the village of Lees in Greater Manchester this morning, as cold weather hit the North of England in the wake of Storm Ciara 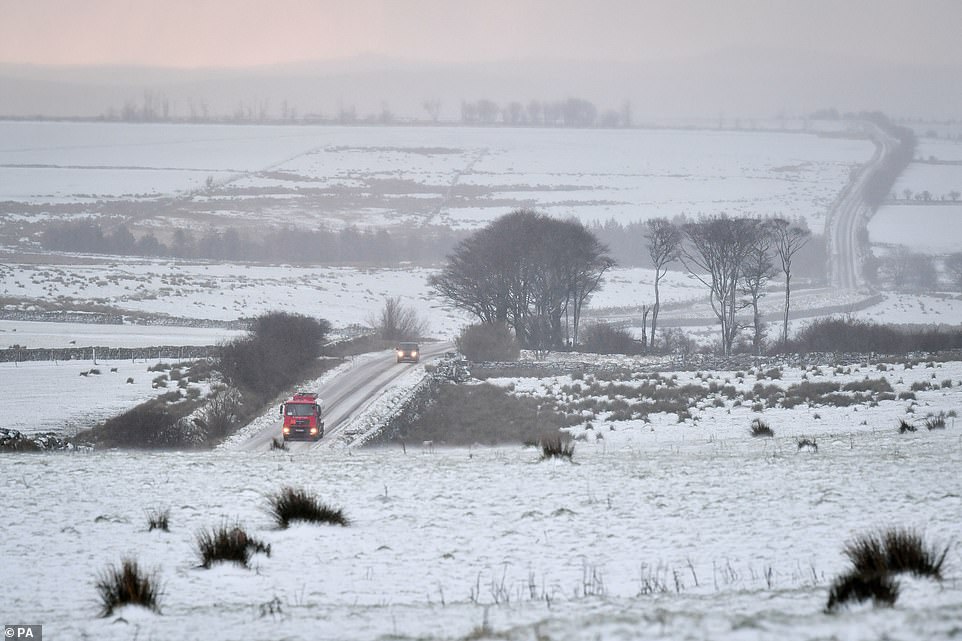 Snow on fields and roads around Princetown on the top of Dartmoor, Devon, where snow fell on high ground yesterday 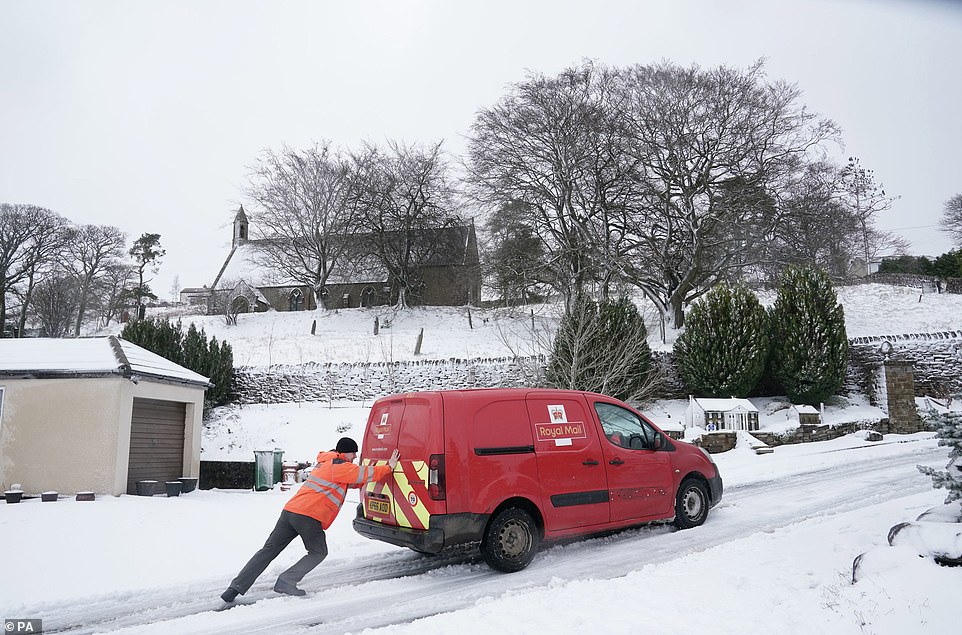 A Royal Mail worker attempts to push a stuck delivery van up a snow covered road in Nenthead, Cumbria, with more bad weather ravaging the country

‘Around the coasts, especially in the West and South, gusts of 60-70mph are likely. This will be accompanied by heavy rain at times.’

The Met Office issued a further warning yesterday for heavy rain during Storm Dennis, lasting between noon on Saturday and noon on Sunday.

Between one and three inches of rain is predicted.

Steve Ramsdale, chief meteorologist at the Met Office, said: ‘Although Storm Dennis is currently not expected to be as severe as Ciara, disruption is still likely.’

Yesterday, 57 flood warnings and 161 less-severe flood alerts remained in place, including in the centre of York.

A further band of rain is set to spread eastwards on Friday. The stormy forecast comes as a dusting of snow fell as far south as Devon yesterday, with wintry scenes in Princetown, Dartmoor. 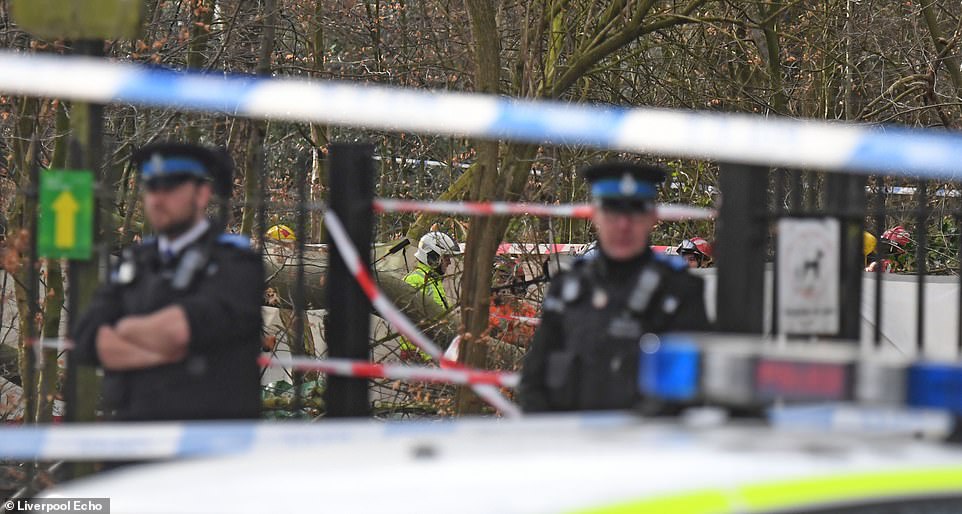 Emergency services attend a scene in Woolton Woods, Liverpool, where a dog walker in his sixties was hit by a falling tree branch yesterday morning. He was later pronounced dead

The dog walker’s family, who laid flowers at the scene this evening, were too upset to comment and he has not yet been identified 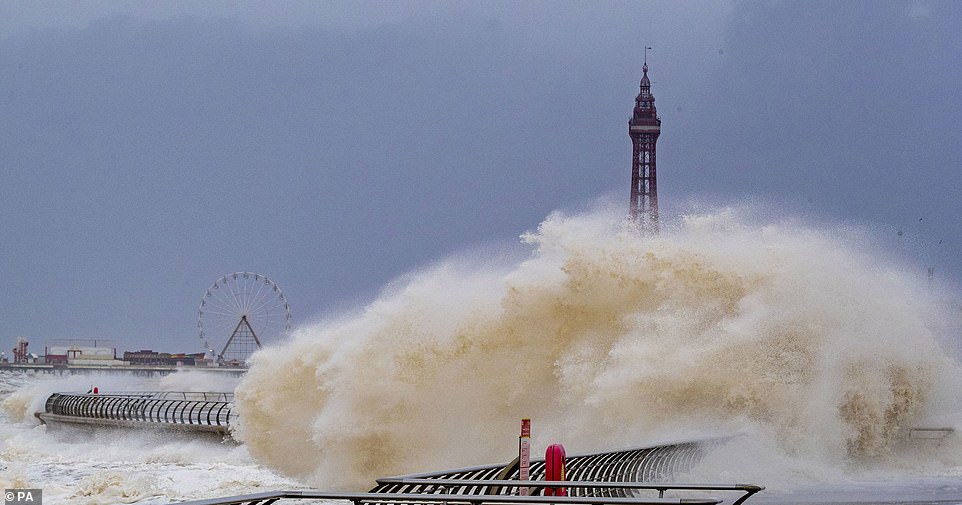 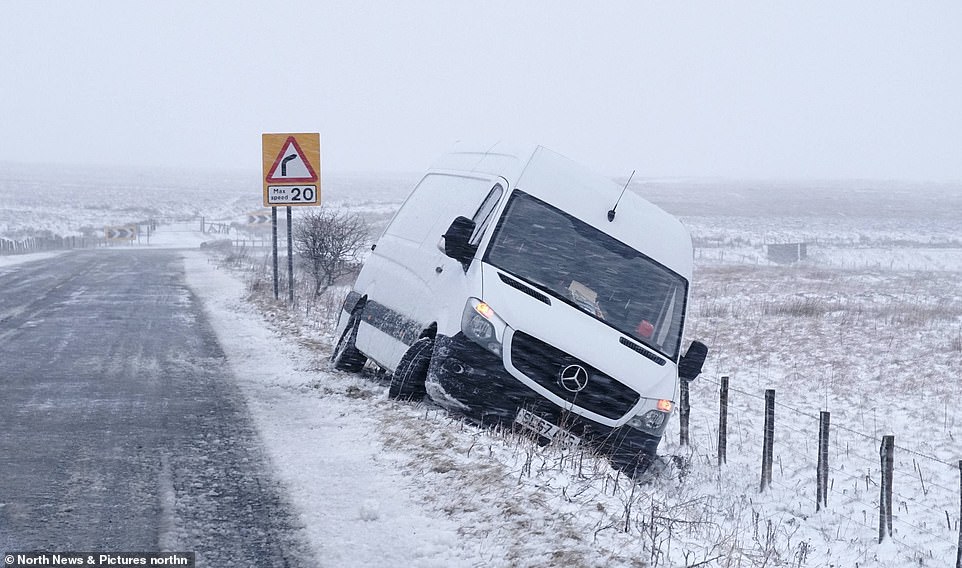 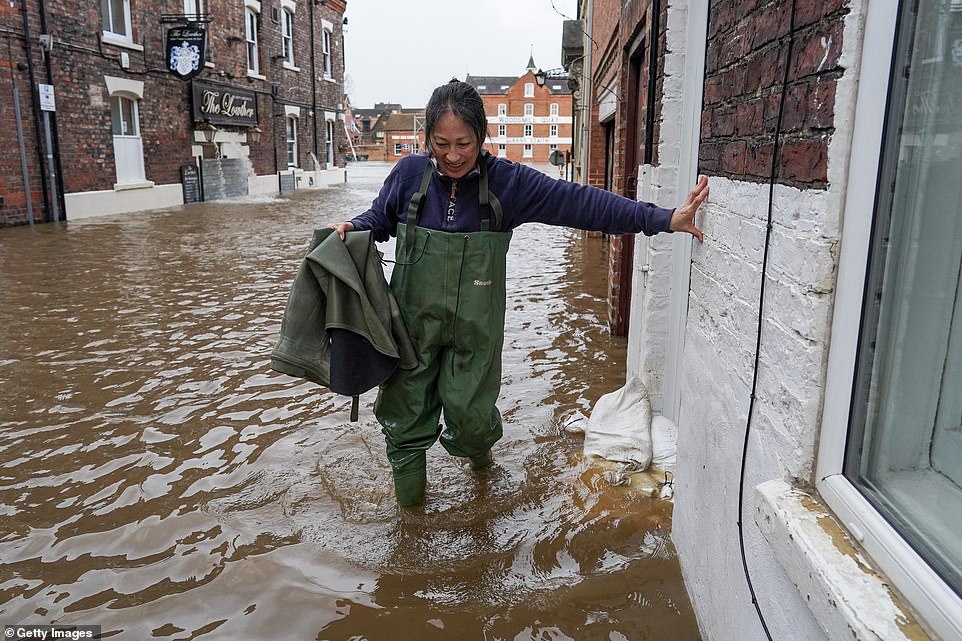 Further north, there were snow flurries in Alston, County Durham, and Nenthead, Cumbria, as well as up to two inches on surrounding fells.

Three other people died during Storm Ciara – a 58-year-old man, whose car was hit by a tree on the A33 in Hampshire on Sunday, a 50-year-old man who got into difficulties while with a diving party off the west coast of Scotland near Oban, and a 77-year-old man who fell in icy conditions in Clydebank, West Dunbartonshire.

Affected residents were yesterday warned not to drink or clean with tap water and were being provided with free bottled water instead.