Some owners of Google’s Pixel 4 XL are reporting a defect that causes the glass back of the phone to peel off.

According to a report from Android Police, numerous users on Google’s own forums and Reddit have complained about the issue which may potentially be caused by a flaw in the phones’ design.

One Reddit user who is claiming to manage a uBreakFix repair store says that the issue is widely known to be a product of what’s known as battery swelling due to a faulty connector.

Google’s Pixel 4 XL may have an issue that causes the back of the phone to peel off. Swelling of the phones’ battery may be to blame (stock)

Battery swelling happens when the cell’s membrane has been compromised, allowing moisture to react with the chemicals and causing the battery to expand.

The user also claims that staff are told not to acknowledge the issue. In a statement, uBreakFix told Engadget: 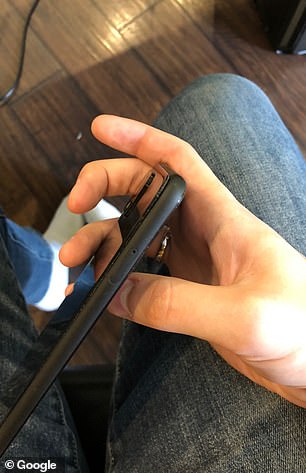 The issue has been reported in Google’s own forums. As pictured above, the glass back of the phone is unfurling from the phone

‘We defer to manufacturers regarding alleged device issues, and we have no known technical service bulletins regarding battery swelling issues in the Pixel 4 series.’

‘Customers who experience any non-user induced issues with their Pixel device can get it repaired under warranty at their nearest uBreakiFix.’

Android Police reports that Google appears to be replacing devices affected by the issue, but hasn’t admitted that it’s a recurrent problem with the Pixel 4 XL.

If the issue is intrinsic with the phone’s design, it could mean that a replacement phone isn’t necessarily going to fix the issue.

A design flaw in the Pixel series of phones would come with fairly inconvenient timing on Google’s part, as the company inches closer to releasing its Pixel 4a – a budget-friendly version of the Pixel 4.